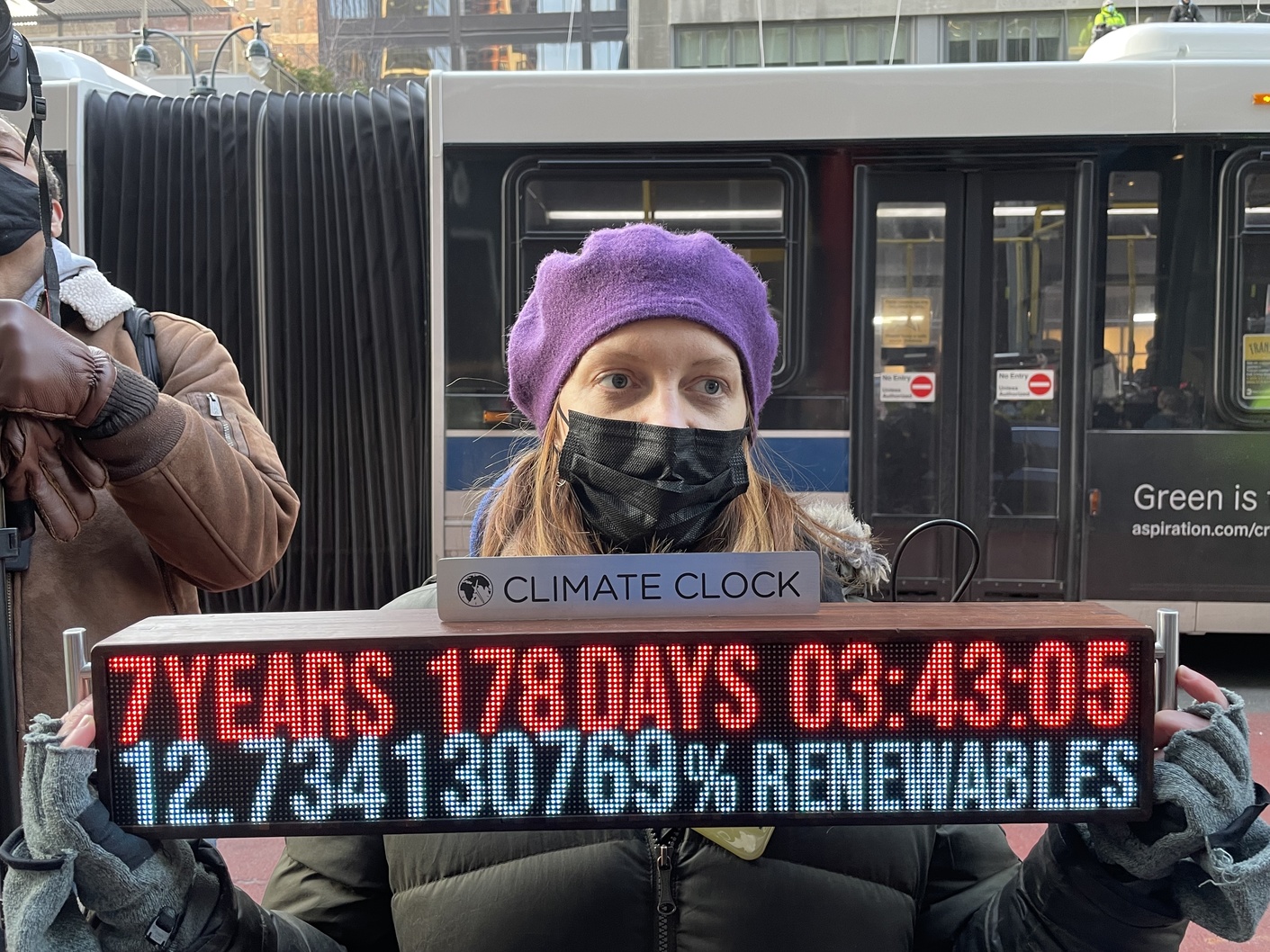 Demonstrators toted climate-change clocks to show that time is running out to transition to sustainable energy. (Photo by Dashiell Allen)

BY DASHIELL ALLEN | Hundreds of environmental activists gathered outside of Governor Kathy Hochul’s Midtown office on Tuesday, protesting the existential threat of climate change, which they say she is failing to address.

While in theory Hochul supports cutting carbon emissions and investing in clean energy, actions speak louder than words, according to youth organizers from the New York People’s Climate Movement, who took to the streets across the state for their Climate Can’t Wait day of action.

The coalition of 30 organizations is demanding that Hochul pass a series of climate-friendly bills, including a moratorium on cryptocurrency mining; the elimination of fossil-fuel subsidies; the Teachers’ Fossil Fuel Divestment Act; and the Build Public Renewables Act, which would allow the state government to build renewable energy plants.

If the Renewables Act is passed, supporters say it would make New York State a shining example of climate resiliency, putting the Empire State on the path toward 100 percent renewable energy by as soon as 2025. A sister bill, the New York Utility Democracy Act, would transfer all of the state’s utilities into public hands over the next two years.

In her budget proposal, Hochul announced a $4 billion investment in the  Environmental Bond Act, as well as $500 million for offshore wind energy development, plus an additional $500 million in clean-water infrastructure funding.

But many environmental activists want her to go even further, to meet — and exceed — the requirements of a bill passed in 2019 that mandates New York State cut greenhouse gas emissions by 40 percent by 2030, and by at least 85 percent by 2050.

“She is not funding climate action!” said Pete Sikora, an organizer with New York Communities For Change. “The state is at only 6 percent wind and solar.”

Dispersed throughout the protest were activists wearing “climate clocks.” The clocks’ top number tracks the percentage of renewable energy produced globally (about 12 percent), while the bottom number counts down to the date when, according to the activists, the Earth needs to become more reliant on green energy than fossil fuels.

This fight is personal to Azam.

“My family immigrated from Bangladesh which is an extremely vulnerable country to climate change,” she said. “I grew up until the age of 6 seeing pollution, poverty, racism, catastrophic disasters.”

Now that Hochul has introduced her budget proposal, the state Legislature has until March 31 to negotiate changes before the final budget is adopted on April 1. That’s why the pressure is on right now for bold legislation. If the activists miss this window, they might have to wait all the way until next year to push for bills fighting climate change.

“The air, the water, the earth that surrounds us — to the fossil fuel industry it’s just a dumping ground for all the emissions we justify by this industry,” said Jay Liu, an organizer with Democratic Socialists for America.

“To fight back,” he said, “we need to all come together and extend our solidarity across these artificial lines that divide us with race, gender, sexuality, disability, nature and not nature.”