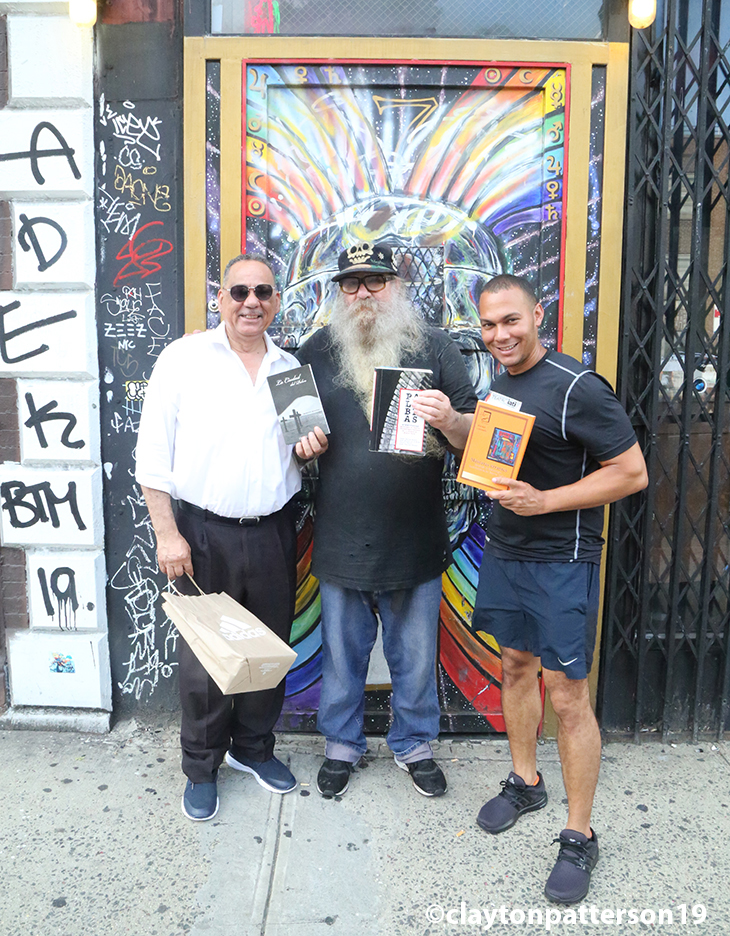 BY CLAYTON PATTERSON | I have, for a few decades, documented the people of the Lower East Side. It’s been a wide range of people: artists, performers, young people to old people, gangsters, protesters, squatters, religious people, junkies, prostitutes, drug dealers, cops.

All kinds of people, all equal in the eye of my camera. All the types and personalities you would expect to find in the New York Kingdom, the Lower East Side. My people.

Over the decades, with my Front Door photos — taken outside my building — I have documented thousands of individuals, mostly Hispanics, the majority of them younger people. Some of those former youths now have grandkids. I need to do follow-up photos.

There is a rare, 500-edition, sold-out book, called the “Front Door Book.” Other than my front window, which was called the Hall Of Fame, no part of these photos has been shown as a collection. The only place was the 32 photos I constantly changed in my home’s storefront window. I have around 2,000 of them scanned. I need much more scanning done.

In connection to the Front Door photos, in this article, I am concentrating on the Dominican Marte family. A full-page photo of one of Claudio Marte’s two daughters can be found in the “Front Door Book.” She is sporting the typical style of Hispanic teenage girls from her early ’90: the long black hair, the big gold hoop earrings, the red lipstick — interesting enough, the same look you saw when Alexandria Ocasio-Cortez was first running for Congress.

We will start with the father, Claudio Marte. Immigrated to the United States in late 1981. To survive he ran a bodega on Rivington between Forsyth and Eldridge Sts. What is most fascinating for me is how invisible a person can be, yet known by so many.

In terms of being in the center of one of the early ’80s cultural explosions on the LES, Claudio’s bodega was smack in the middle between No Se No and the Rivington School Sculpture Garden. A serious beer-drinking crowd. How many artists, performers and audience members bought beer in this bodega? He probably fed his family off the beer sales alone.

How many of his culture vulture customers knew Claudio is also a writer, a poet and playwright? He published his first book of poems, “La Ciudad Del Polvo” (The City of Dust), in 2008. At the IATI Theater’s workshop his “El Casero” was chosen as the most outstanding play in 2009.

Claudio is nominated, as a writer, for this year’s NY ACKER Award, and the possibility of his Teátrica group also being nominated is being considered.

I first photographed one of Claudio’s sons, Christopher Marte, when he was very little lad. He has one of those faces that has the same look now as when he was younger, not a baby face, but the same features. The last photo I took of him was probably outside the 2019 “Why Not Care” event. That event produced by three NY ACKER recipients for community support: Marte Mar, Liah Nejia and Power Malu.

Christopher was starting to campaign for his next run as the candidate for City Council District 1. In the last election, in 2017, he almost beat Margaret Chin. He is the New York director for Arena, a social welfare organization, which is building communities that activate the next generation of civic leaders.

Christopher also serves as a board member for Defy Ventures, which helps previously incarcerated individuals create businesses and encourages them to become positive influences in their communities. Christopher was never a street kid.

Coss Marte, Claudio’s older son, also has a fascinating history. In his younger days he was a kingpin drug dealer. I think one of his main spots was at Eldridge and Broome Sts. Not sure about that, but I took a photo of him there. I believe I have a heroin bag stamped with the “C-Town” brand that was sold around that location. I had taken pictures of some of that crew — in front of my door and at that spot — who sold there.

Coss took a hit and spent a few years in jail. I have photographed some of the people he did time with, like Marco (“Front Door Book” and on the street) from the Hell Raiser crew, a longtime friend of mine.

Coss got involved with Defy Ventures, a group that works to rehabilitate ex-convicts through teaching entrepreneurial skills. I used to tell these guys, if you can sell dope you can sell anything. This program gave them the expertise.

Coss took all he learned in that class, plus his prison survival skills, and put it into practice. He took his prison exercise regimen and turned it into a very successful business called ConBody, at 121 Ludlow St. He has received many write-ups.

And now following in the footsteps of exercise gurus like Jane Fonda and Richard Simmons, he has his own Internet exercise program. You can watch the instructor inside a prison environment — his gym is set up like a prison pen — and yet, the client can be at home, safe and sound.

You can hear an interview done on Aug. 22, 2019, with Coss and Claudio Marte on the “Clayton Patterson Show” on 8 Ball Radio.

Point of interest. Why doesn’t the city have a nurse in every police precinct, fire house, sanitation and M.T.A. garage and so on? A room to do simple daily tests, like temperature taking? Just like the school nurse.

Why aren’t the Red Cross and FEMA, which have both collected millions of dollars, out on street corners with a truck giving out water and supplies like powdered milk, cheese and butter, like the old days.

Pot, in this time of stress, should be made legal. Delivery people should be left alone and be allowed to sell their product.

I got a note from Jay Blotcher asking people to give their unused MetroCards to healthcare workers.