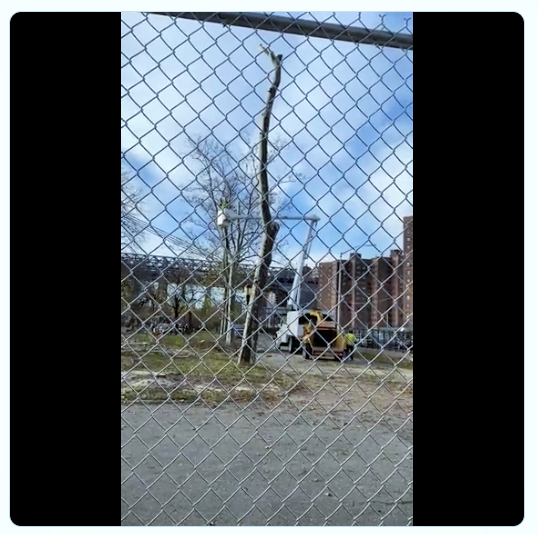 A screen grab from a video of workers lopping boughs off East River Park trees on Tues., Dec. 7. (Photo by Allie Ryan)

BY THE VILLAGE SUN | The day after the city fenced off the southern half of East River Park, workers are already starting to cut down trees.

Ryan also noted on Tuesday that, to conceal the tree carnage from view, workers were hanging up a green tarp on the new chain-link fence.

The city’s $1.45 billion East Side Coastal Resiliency plan calls for wiping out the existing 50-acre park and every single bit of its foliage, then raising the park 8 feet to 10 feet to protect the surrounding neighborhood and also the park from coastal flooding.

Opponents argue that the idea of destroying the carbon-combating park to fight climate change is absurd and a tragedy that could have been easily avoided by using an earlier, more low-impact resiliency plan.

But the city counters that, among other things, letting the park serve as a sponge to absorb floodwater is a bad idea since it would damage the park’s electrical infrastructure. The park has not suffered coastal flooding since Hurricane Sandy in 2012. The city also says that the earlier resiliency plan would impact traffic on the F.D.R. Drive, so would need to be done at night, which would be noisy for local residents, plus would impinge on Con Ed power lines running under the park.