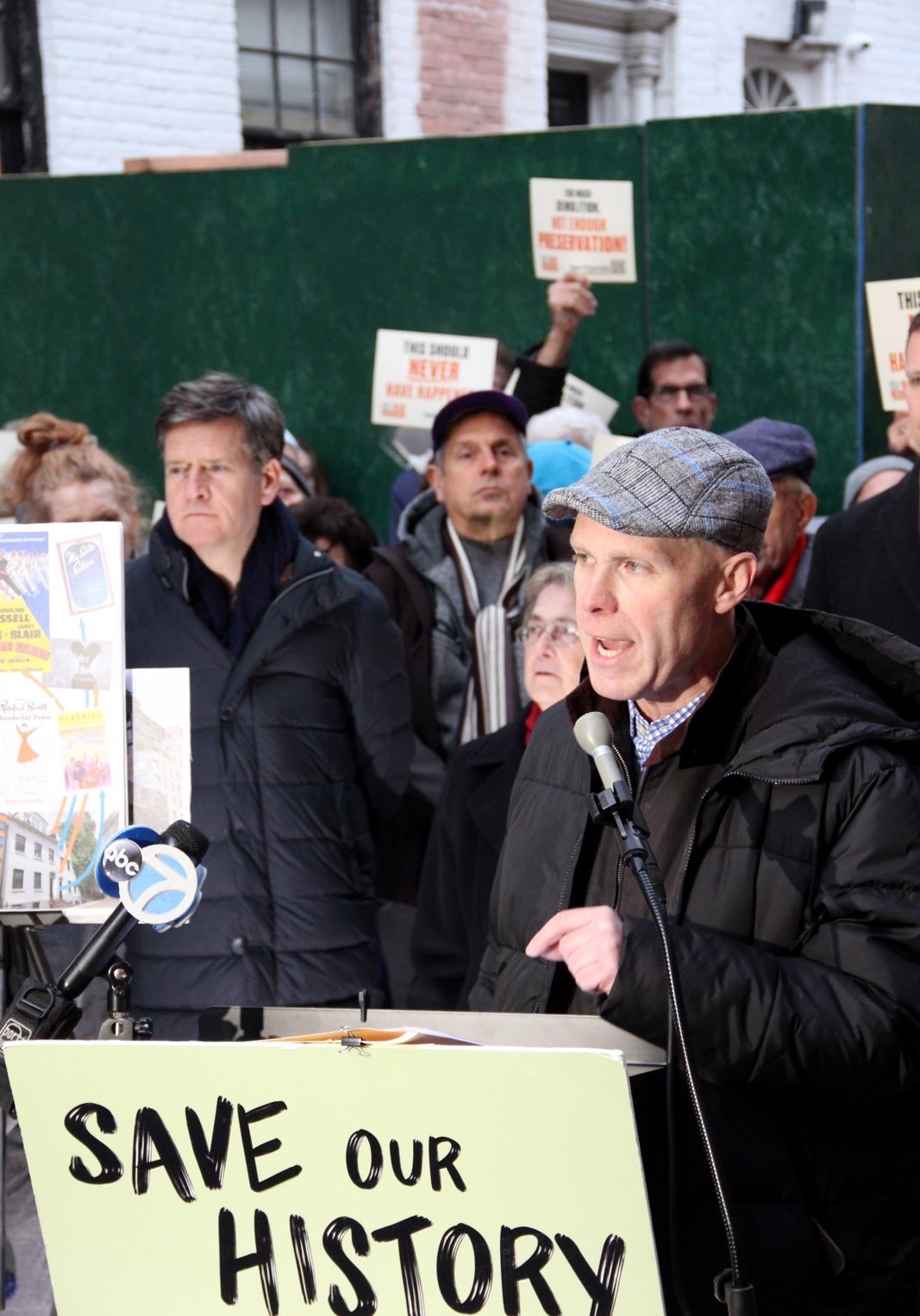 BY THE VILLAGE SUN | Local politicians and preservationists stood shoulder to shoulder with Greenwich Village residents outside 14 Gay St. on Monday to protest the loss of the nearly 200-year-old building — a structure that once inspired a celebrated series of magazine stories, a book, Broadway shows and movies.

Speakers demanded accountability from the owner, stricter oversight from the city, and reform of the system for protecting vulnerable, historic landmarks.

Early last week, work on the foundation of 14 Gay St. caused “large cracks” to open on an external cellar wall. City inspectors subsequently deemed the building to be at imminent risk of collapse and it was ordered that the structure be razed immediately — though carefully — starting as of last Friday.

Meanwhile, the stability of an adjacent building, 16 Gay St., was also found to have been compromised — again, by faulty foundation work — but the city is reportedly working with a private contractor to try to save the beleagured townhouse.

No. 14 Gay St. was the home in the 1930s of author Ruth McKenney, whose writings about her time there became the New Yorker’s farcical “My Sister Eileen” stories — which went on to become a book, a play, a film and radio and TV series — about two young Midwestern transplants in Greenwich Village, and which later became the basis for the Leonard Bernstein musical and movie “Wonderful Town.”

At Monday’s press conference speakers noted there had been violations for years on the fragile historic buildings, as well as complaints about unsafe work and hazardous conditions. Six months ago, Nos. 14, 16 and 18 Gay St. and the adjacent Nos. 16, 18 and 20 Christopher St. were purchased for $12 million by Lionel Nazarian.

According to the group Village Preservation, Nazarin is “a landlord with a track record of creating allegedly hazardous conditions and what tenants called ‘a living hell’ of harassment, denial of services and dangerous work at his other nearby properties.”

Andrew Berman, executive director of Village Preservation, and other speakers also stressed that this was the 10th landmarked, early-19th-century rowhouse in Greenwich Village that the city has ordered demolished in the past year,which they said indicated “a grievous lack of proper oversight by city agencies charged with protecting these historic structures.”

Speakers called for full accountability from the owner, contractor and engineer, as well as from the city’s Department of Buildings and Landmarks Preservation Commission for their “failure to act.” They also called for an overhaul of the city’s system for monitoring the safety of fragile, landmarked properties, plus strict oversight of work and conditions at this owner’s six adjoining properties, which are all around the same age and condition.

“What was once a symbol of the dream of coming to New York from anywhere and achieving anything, has instead become a nightmarish symbol of greed, craven disregard for safety, and a dysfunctional New York City bureaucracy that can’t do its job,” the preservationist railed. “How much more of a warning did the city need? There had been violations, complaints and dangerous conditions at this and adjacent houses under the same ownership for many months. These houses are all two centuries old and fragile, designated landmarks — and the new owner has a history of creating hazardous conditions and harassing tenants. Did he need to hang a giant sign on the buildings saying, ‘Warning — This Building Is in Danger!’?

“There is something very wrong when this is the 10th landmarked, 200-year-old house in this neighborhood to be ordered demolished by New York City on account of safety in a year,” Berman declared.

Councilmember Erik Bottcher said: “I demand accountability for the people who allowed this historic building to deteriorate to the point of imminent collapse. Nothing is more important than human life and safety, but the city shouldn’t allow bad actors to get away with reckless construction practices that result in demolition. I stand with Village Preservation and the neighbors of Gay Street in expressing outrage about the loss of this historic structure.”

State Senator Brad Hoylman said: “It’s unacceptable that yet another historic building in the Greenwich Village Historic District is facing the wrecking ball. The fact that 14 Gay St. is the 10th historic building to have been demolished in the Village strongly suggests that the city agencies in charge of monitoring and protecting historic buildings aren’t doing their job. We demand that this change.”

“It is disheartening to see the potential loss of yet another landmarked building,” she said. “Fourteen Gay St. is a rare example of early-1800s architecture that helped to give Greenwich Village its historic charm, appealing to the local community and tourists alike. I urge the city to halt this demolition and not reward unpermitted work by allowing miscreants to benefit from flouting the law. The city must do more to preserve our landmarks by recognizing their value to our neighborhoods and working to ensure the stability of their infrastructure, even when unexpected challenges arise during construction or renovations.”

Chenault Spence, the chairperson of the Landmarks Committee of Greenwich Village’s Community Board 2, charged that City Hall is “complicit” in the historic building’s demolition.

“C.B. 2 Manhattan has great concern about neglected properties in the district and sends notice to the Landmarks Commission as situations come to its attention,” he said. “Further, funding for monitoring and bringing owners of buildings to account by the Landmarks Commission for neglected properties has been placed in the top 10 priorities of the board for the 2022-2023 fiscal budget requests. Without additional funding for proactive enforcement and accountability, New York City remains complicit in demolition by neglect, so clearly evident with 14 Gay St.”

Prior to Lionel Nazarian’s purchase of the cluster of six buildings this April, they were owned by the Gopher Group, and before that for seven months in late 2019, by New York City, which took possession of them when longtime owner Celeste Martin died without a will in December 2018. Public records show a long list of public complaints filed, violations issued and hazardous conditions at the buildings before Nazarin’s ownership.

A year ago, Village Preservation and local politicians protested after D.O.B. and L.P.C. similarly authorized the demolition of nine nearly 200-year-old landmarked houses at the northeast corner of 14th Street and Ninth Avenue, after work authorized by the two city agencies — to gut the buildings’ interiors but keep the shell of their facades intact — created hazardous conditions.

In a statement to The Village Sun, D.O.B. placed the blame for the Gay Street catastrophe on the owners doing, as the agency put it, “unapproved construction work” on the two buildings’ foundations.

“After finding that 14 Gay St. was in immediate danger of collapse due to unapproved construction work in the cellar, D.O.B. forensic engineers took immediate action to protect the public,” the agency said. “A construction fence has been installed around the two affected properties, and the owners have been ordered to carefully dismantle the unstable building. As we work to save the historic building at 16 Gay St., we have also issued orders for emergency shoring work there to prevent further damage to any neighboring buildings. Putting the public at risk with dangerous, unapproved construction work is unacceptable, and we will be taking appropriate action to hold the responsible parties accountable.”