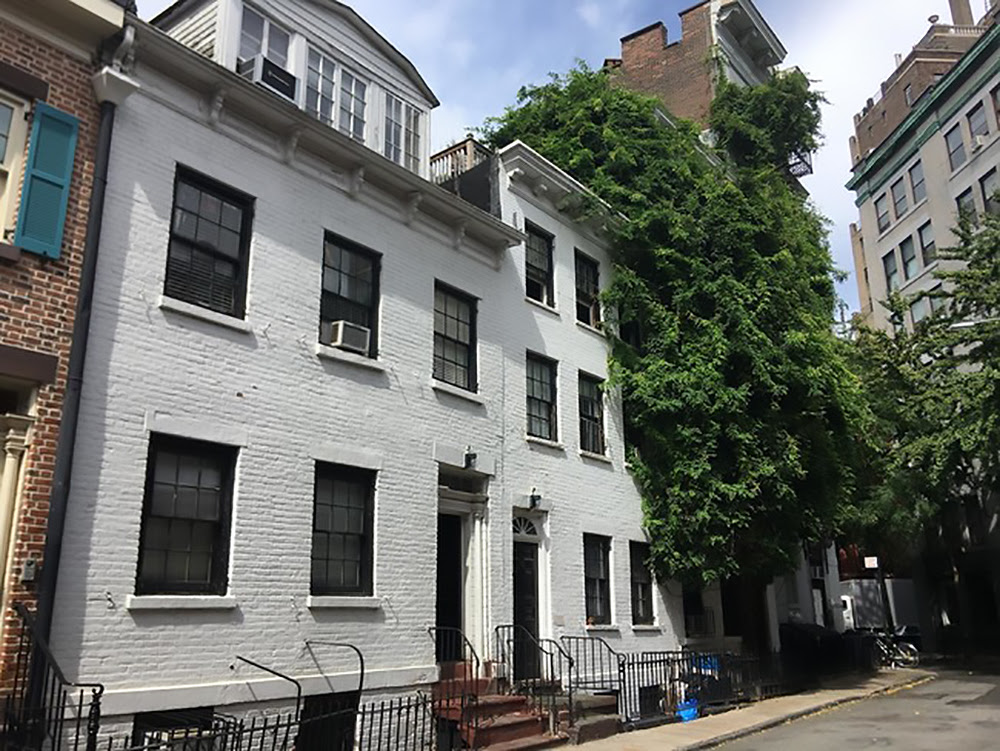 The city has declared that 14 Gay St., at left, is in an untenable condition. (Village Preservation)

BY LINCOLN ANDERSON | Updated Nov. 13, 12:30 p.m.: In a case of neglect followed by a renovation-and-repair project gone horribly awry, the city has ordered the immediate demolition of a landmarked, 200-year-old Greenwich Village building that is now at risk of imminent collapse.

Meanwhile, things could get even worse, in a disastrous domino effect, as an adjacent building has also been seriously structurally compromised due to “illegal and unpermitted” work, according to the Department of Buildings, which says it is working to try to save the building.

Village Preservation reported that the city has greenlighted the destruction of 14 Gay St. — between Christopher Street and Waverly Place — “following what we have been told is dangerous, unpermitted work on the site that compromised its structural integrity.”

The preservation group, local politicians and neighbors will hold a press conference and demonstration on Mon., Nov. 14, at 4:30 p.m.. in front of the house, “to demand accountability and call for reform in the city’s system for monitoring and protecting historic structures.”

According to complaints posted on the D.O.B. Web site, the townhouse has been in a dilapidated and unsafe condition for at least a few years.

The current owner of both 14 Gay St. and the adjacent 16 Gay St. is apparently the Nazarian Property Group, which purchased the two buildings and three other nearby addresses for $12 million in April.

In February 2020, an external cellar wall at 14 Gay St. was reported to be “leaning/bowing out into the areaway.”

In March 2020, the building was reported to be “leaning and unstable.”

In July 2021, a complaint notes the building was “shaking/vibrating/structural stability affected/unstable building.”

Finally, on Mon., Nov. 7, D.O.B. slapped a partial stop-work order, plus a full vacate order, on the property, noting that debris was either falling or “at risk of” falling, that the building’s foundation was “unsafe” and that “unpermitted structural work” had been being done.

A subsequent complaint posted on Nov. 9 notes that — in the “emergency work” that was previously being done to shore up the building — 75 percent of a load-bearing cellar wall had been removed, but without installing adequate support to hold up the structure above, leaving the place now “unstable and at risk of collapse.” The complaint further declares, “immed demo bldng,” meaning the building is immediately to be brought down, with a start date given of today, Fri., Nov. 11.

An emergency stop-work order was also slapped on 16 Gay St. next door, where unpermitted work on a foundation wall has compromised the building’s stability, according to D.O.B.

Village Preservation provided some historic background on the doomed structure: “The house at 14 Gay St. was built around 1827. In the 1930s, writer Ruth McKenney lived at the address and wrote of her time there in The New Yorker short stories “My Sister Eileen,” which was turned into a book, play, radio and television series and two films, and became the basis for the musical “Wonderful Town,” which has, in turn, been produced many times for the stage, film and TV. The iconic building was immortalized in photographs by Berenice Abbott.”

Ironically, McKenney wrote about the basement apartment that she and her sister shared being rocked by dynamite explosions from the construction of the nearby I.N.D. subway line.

According to Village Preservation, the history- and culture-laden house “survived riots, fires and 200 years of wear and tear — but under a new owner and the watch of the NYC Department of Buildings and Landmarks Preservation Commission, it is being torn down to avoid imminent danger to neighboring structures and passersby.”

Village Preservation is not questioning the emergency need to take immediate action “to protect public safey.” However, the organization is outraged about and questioning how things reached this sorry state, saying, “Something is very wrong with this situation.”

“This is the 10th landmarked, early 19th-century house in Greenwich Village the city has ordered demolished based upon work or conditions that have compromised its safety or integrity. Public records show this fragile house has had violations for years. Clearly the city agencies in charge of monitoring and protecting historic buildings are not doing enough.”

Following this article’s publication in The Village Sun on Friday, the Department of Buildings on Sunday morning sent the newspaper the following statement:

“After finding that 14 Gay St. was in immediate danger of collapse due to unapproved construction work in the cellar, D.O.B. forensic engineers took immediate action to protect the public. A construction fence has been installed around the two affected properties, and the owners have been ordered to carefully dismantle the unstable building. As we work to save the historic building at 16 Gay St., we have also issued orders for emergency shoring work there to prevent further damage to any neighboring buildings. Putting the public at risk with dangerous, unapproved construction work is unacceptable, and we will be taking appropriate action to hold the responsible parties accountable.”

D.O.B. also provided the the following timeline and informational facts about the two buildings: