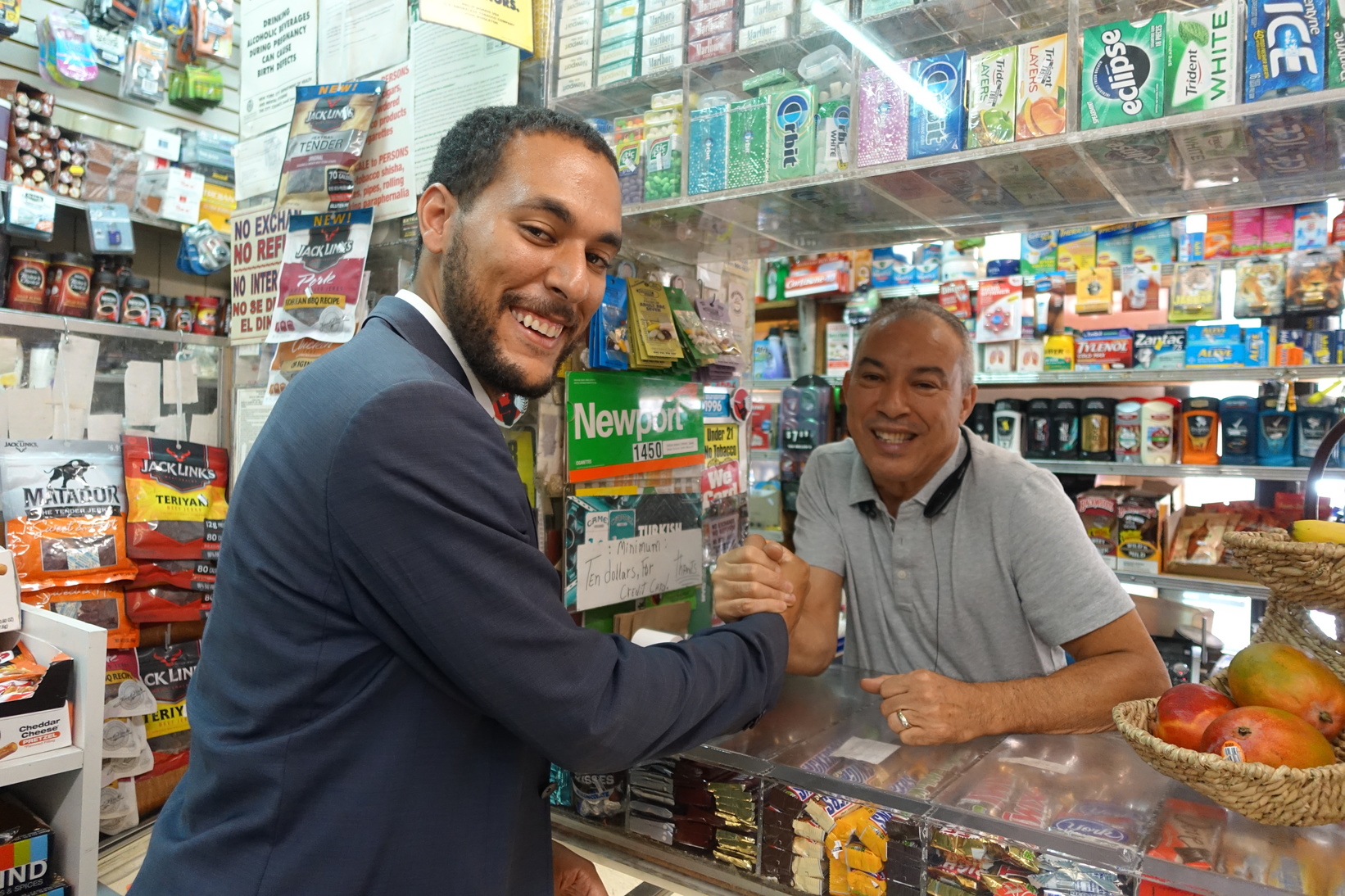 “He walks a marathon every single day, knocking on doors, asking neighbors how he can help,” Marte’s brother, Coss, said.

This was probably a slight exaggeration, but I got the idea. Even when he’s not campaigning across Lower Manhattan to be the next District 1 councilmember, I often see Marte out and about, speaking with constituents. As a result, he understands firsthand what issues matter most to people in his district, and he’s also in the best shape of his life.

I met with Marte the other day at the Nolita cafe where he used to eat breakfast every morning before campaigning took over his every waking moment. The cafe was halfway between where he grew up on the Lower East Side and where I grew up in Soho, so we had a lot to talk about: what is different, what has stayed the same, and what he thinks must change if he is elected.

Marte has always had his ear to the ground and his eyes on the street. During the worst of the pandemic, Marte connected nonprofits that collected food donations with tenant associations, and he also delivered many of the meals himself. He formed a strong coalition of local groups that advocated on behalf of the tenants of 85 Bowery when they were illegally evicted from their apartments, and even sat out in the rain with hunger strikers until the displaced tenants were able to return home.

I asked him how he moves the needle in such a diverse district.

“People came out and we built a coalition against displacement,” he said. “Groups supporting other groups, giving each other recommendations, legal advice. There is so much more power that way.”

Marte’s life experiences have led him, perhaps inevitably, to run for elected office. Born and raised at Rivington and Forsyth Sts., Marte watched his neighborhood slowly change as gentrification spread east from the Bowery out toward the river.

He grew up working at his father’s bodega, stacking cans and delivering beers to the men playing slots in the back room. The store eventually closed due to rising rents. He interacted with members of his community every day, from housewives to homeless people to the neighborhood beat cops.

Marte attended P.S. 20, a diverse public school on Essex St. that had (and still has) a dual-language Mandarin program. Thus began an educational journey filled with multicultural encounters. By the time he graduated from college, he had lived in seven different countries and spoke three languages, Mandarin, English and Spanish.

“People appreciate that you try and make an effort, it changes the whole equation,” Marte said, of being trilingual. His Mandarin is not perfect, and he gets laughed at sometimes when he’s door-knocking on the campaign trail, but they are laughs of appreciation.

“Chris brings a lot of warmth as a person that people really respond to,” said Caitlin Kelmar, Marte’s campaign manager, who has been working with him since 2016.

Having spent his youth immersed in many different cultures in a variety of contexts, from small rural villages in China to upper- and middle-class enclaves in Hong Kong and London, Marte effortlessly interacts with people from all walks of life, and language is never a barrier for him.

“Everyone has their own issues, and you have to meet people where they are,” he said.

This skill would come in handy as the councilmember for District 1, which covers most of Lower Manhattan, including Greenwich Village, part of the East Village, Noho, Soho, Tribeca, the Financial District, Chinatown, Two Bridges and his home turf, the Lower East Side, plus Governors Island, comprising one of New York’s most ethnically, linguistically and financially diverse districts.

I first met Marte when he ran for City Council in 2017 and almost defeated Margaret Chin, the two-time incumbent and City Hall insider. That loss, by only 200 votes, was seen as a huge win by his supporters, because it demonstrated that the issues he ran on were the issues that mattered to many Downtown residents. The past four years have not diminished Marte’s enthusiasm to serve his community. If anything, they have redoubled his resolve to fight for equity across the district through grassroots campaigns.

When I asked Marte how he got started in community organizing, which has been at the core of all of his initiatives, he was able to pinpoint the actual moment — when he received a flier. In 2015, Marte worked for an immigration law firm in eastern Washington State. Every day he sat with two lawyers at a table interviewing migrant farm workers to help them apply for the DACA 2.0 program.

“I was able to see my parents in these folks, they all came [to the U.S.] to provide a better life for their children,” he said.

In turn, his clients saw their children in him, and the possibility that their children could also one day be sitting on the other side of the table.

Marte’s year working in immigration law inspired him to return to New York City and apply to law school. While studying for the LSAT, though, he was sidetracked when he received a flier outside the Grand St. subway station from NMASS (National Mobilization Against Sweatshops) about organizing to fight gentrification and displacement.

He went to the NMASS office and asked how he could help. He tabled, he rallied, he attended town halls where he met local politicians. It was then that Marte understood that by running for local office he could help the people being displaced right in his own backyard.

“I kept coming back because it helped me connect the dots,” he said. “As a kid, you can’t connect the dots. It’s just, ‘My cousins are moving to Queens.’ I grew up in a building with a lot of aunts and uncles and cousins and fake cousins. But most of them eventually had to move out until there were only three or four families left.”

If elected, Marte plans to develop and pass community-based rezoning plans, ending developer-driven rezonings that displace neighbors and small businesses. He would also create neighborhood plans that expand affordability, protect existing immigrant communities and defend residents from displacement. These are district-wide issues that affect everyone, and through his practiced coalition building, he believes change would come.

“It all starts with land use, which is decided at the local level, not state,” he explained. “Most people find it boring and technical, but it has a bearing on everything else.”

This is why Marte is running for City Council and not any other seat. One of the key roles of the City Council is that it votes to approve or reject development projects that need public approval.

This last stretch of campaigning before the Democratic primary election will be nonstop for all candidates and Marte will be hands on, all the time, at every level, as he always is.

Recently, I’ve seen Marte numerous times talking to people outside my local supermarket and on Zoom at community meetings. He seems to be everywhere at once, and that’s because he is. His typical day begins at 5:30 a.m. and ends at 11:30 p.m.

“I’m asleep as soon as my head hits the pillow,” he said.

“If you walk through a neighborhood with Chris it takes twice as long as it normally would. He’s constantly stopping, lots of fist bumps and high fives,” Kelmar told me when I asked her what it’s like campaigning with Marte. “A lot of the voters we talk to are really cynical about local politics, but Chris just doesn’t have any cynicism in him,” she explained.

“He’s this guy with the same life experiences as them and he’s not giving up — he doesn’t think this is just the way it always has to be. He brings along people who aren’t used to voting in elections like these.”

Marte took off to begin that day’s campaigning marathon, but not before leaving me with a final positive thought.

“The city is always changing and there’s this attitude of ‘We can’t do anything about it,'” he said. “From my experience, people can have a huge impact on what this city will become, especially coming out of the pandemic. And the best way to start that change is by voting.”