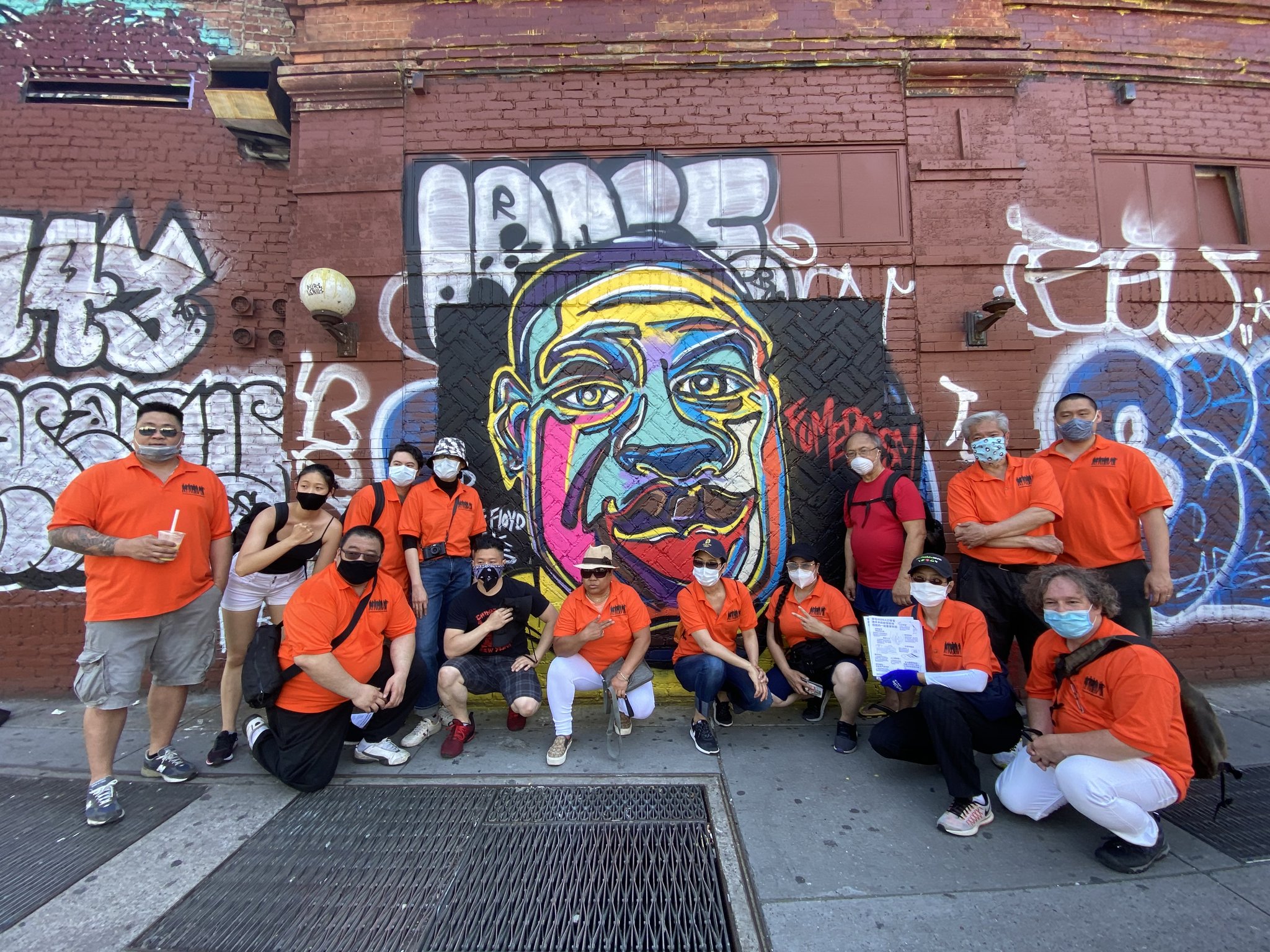 Chinatown Block Watch members pose in front of the George Floyd mural by FUMERO at Houston St. and Bowery. Karlin Chan, the group's founder, is standing, second from right. (Photo by Chae Kihn)

Chinatown Block Watch is looking out for locals’ needs

BY THE VILLAGE SUN | Who watches the Watchmen…and the Watchwomen?

As it turns out, a lot of people, actually.

That’s the answer, at least in Chinatown, where grateful locals are looking to a new group of orange-shirt-clad volunteers for safety and information during this time of great uncertainty.

The new group, #ChinatownBlockWatch, was originally founded to combat anti-Asian prejudice, but its work now goes beyond that, as they spread a message of safety and positivity, along with the latest info on small-business grants.

Chinatown activist Karlin Chan, who is on Community Board 3, founded the group a few months ago in response to xenophobic attacks and racism against Chinese and Asian Americans as a result of COVID-19.

“I was hearing of harassment against our community by those who blame the Chinese for this pandemic outbreak, and decided to organize local residents,” he said. “And now we have members from all over the city.

“We are a diverse group of different backgrounds united to fight xenophobia and racism,” he said. “I started with three friends and we’ve grown to almost 40 members who ‘patrol’ whenever they are available. On our patrols, we would also disseminate information to merchants, as it develops, regarding government grants, loans, health, etc.

“In nutshell,” Chan continued, “we are neighbors looking after neighbors, and it’s reassuring to local merchants and residents to see familiar faces looking after them and the neighborhood. Our streets were almost deserted a couple months back, except for those out buying groceries and necessities. There was real fear in the community because of several highly publicized attacks against Chinese and Asians in the media.”

In solidarity with the Black Lives Matter protests, Chinatown Block Watch members recently posed for a photo in front of a George Floyd mural by street artist FUMERO at the southwest corner of Houston St. and Bowery.

At the same time, they also took a shot in front of a Chinatown restaurant to send out the message that looting is not cool and only muddies the message of the fight for justice.