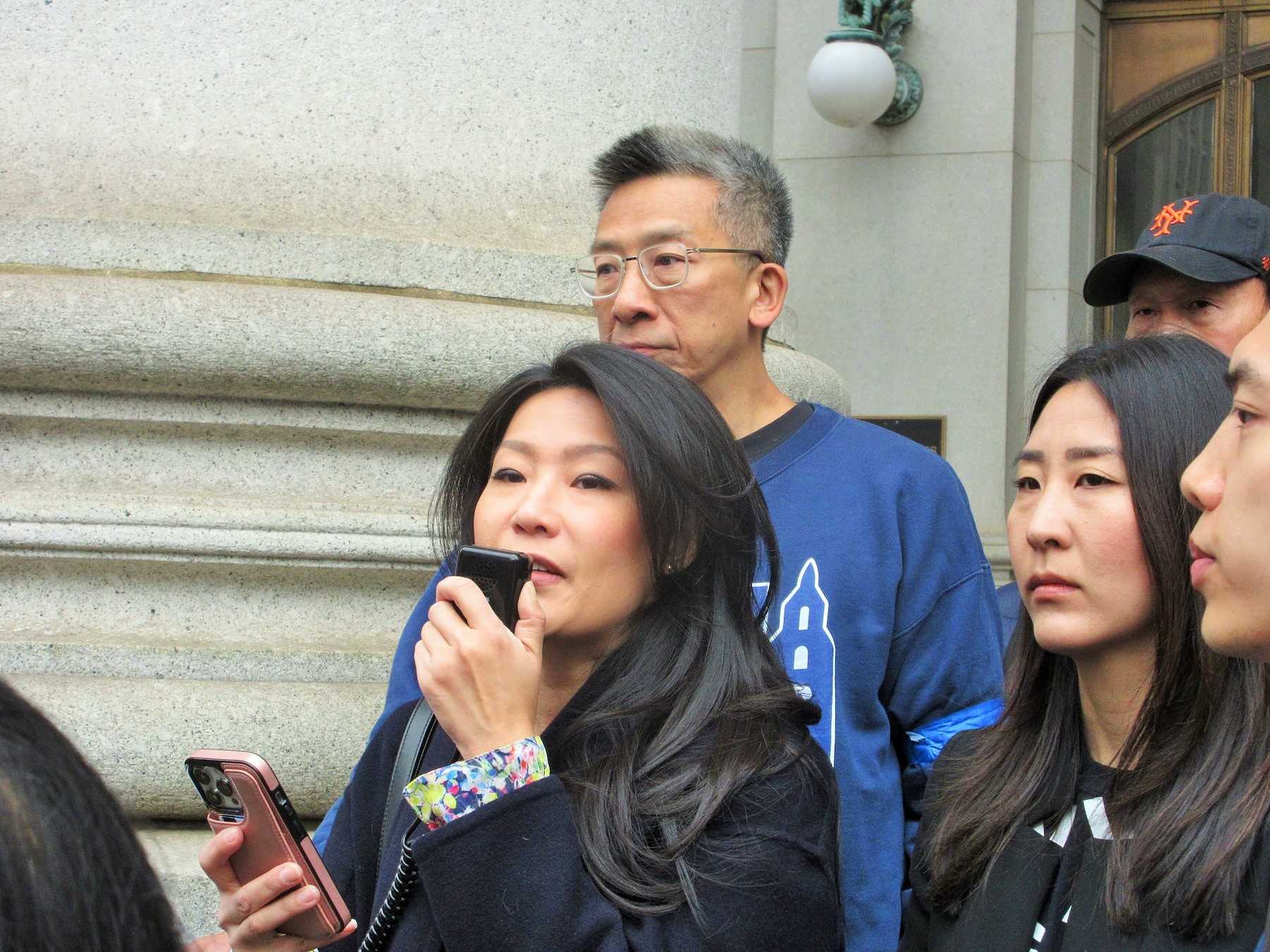 Evelyn Yang, one of the "Chinatown 10," decried America's history of anti-Asian racism, charging that it continues today in projects like the neighborhood-wrecking "megajail" project. (Photo by Dashiell Allen)

BY DASHIELL ALLEN | Chinatown community members and advocates gathered outside the Municipal Building on Monday morning before heading to their court appearance — but the court couldn’t even find half of their summonses.

On April 13, the group of 10 were arrested for civil disobedience when they blocked trucks installing fences around the Manhattan Detention Complex in preparation for its demolition. The city plans to build a new, larger facility, often referred to as a “megajail,” at the site as part of the $8.3 billion borough-based jails plan to close Rikers Island.

Edward Cuccia, a lawyer who represented the group, and whose office shares a wall with the M.D.C., told The Village Sun that the court was unable to locate the summonses for about half of the arrested protesters.

After the defense attorney moved for charges to be dropped, the others were issued 24-hour adjournments in contemplation of dismissal, or A.C.D.s for short. In other words, if they aren’t arrested in the next 24 hours the charges are dropped and their case is sealed.

At a press conference before their court hearing, speakers expressed their staunch opposition to the jail, vowing that they would get arrested again.

“One hundred forty years ago this week, Chester Alan Arthur, a man whose monument still stands in Madison Square Park, signed the Chinese Exclusion Act to keep Chinese immigrants out of this country,” community activist Grace Lee, who is running for Assembly, told the small crowd. “Forty years ago, when the Chinatown community protested the construction of the Manhattan Detention Complex, then-Mayor Koch said, ‘You don’t vote, you don’t count.’ And in the last year, we’ve seen the Hate Crimes Task Force dismiss reports of hate crimes against Asian New Yorkers as we simultaneously witnessed cold-blooded murders and brutal attacks against our community, especially women and seniors.”

“I would get arrested again for this fight,” said Jillian McManamon, a self-described new Chinatown resident, who lives across the street from the jail. “We need to seek out abolitionist solutions to the prison-industrial complex. It’s not only crippling our city but it’s crippling our country and it’s deeply rooted in systemic racism.”

Evelyn Yang, the wife of former mayoral candidate Andrew Yang, said that if her husband had been elected she wouldn’t have needed to be protesting.

“We’re supposed to be celebrating Asian Heritage Month,” she said. “It’s ironic that I, along with the rest of this group, am walking into court for defending Chinatown’s right to exist. Every reasonable person looking at it is saying, ‘Oh my gosh what is going on [with the ‘megajail’]?’ They are in disbelief, they are in shock. And they are sickened.”

Addressing the plan’s advocates, who have called the opposition NIMBYs, she said, “You need to educate yourself on what NIMBY means. Chinatown is overwhelmingly poor, immigrant and politically disenfranchised. By definition, they do not have the privilege to be NIMBY. They have lived with more jails and shelters than any place else for a long time already.”

Jan Lee, a co-founder of Neighbors United Below Canal Street and lifelong Chinatown resident, said the main beneficiaries of the new jail project would be developers.

“Every time that Chinatown has borne witness to one generation of jail after another, we have watched the incarceration system become a system of profit,” he said, “become a system where only developers who are profiting off of the lives of people incarcerated, get bigger and more powerful.”

After the press conference, Lee added that he still hopes it’s possible to work with the Adams administration and city agencies to improve the project.

“I think there’s still room in there with the mayor to talk about scaling back, reusing what we have,” he said, “and with the extra money that’s saved to build some affordable housing on the same site.”

When asked by a reporter if he believes Mayor Adams went back on his pledge to stop the “megajail” from being built, Councilmember Christopher Marte said, “Yes.”

At his inauguration in February, Marte initially said he believed he had “won the mayor over to our side.”

“I thought the administration heard the complaints of the community,” Marte said Monday, referring to talks during the transition period before Adams took office. “He said it himself. And he changed his mind.”