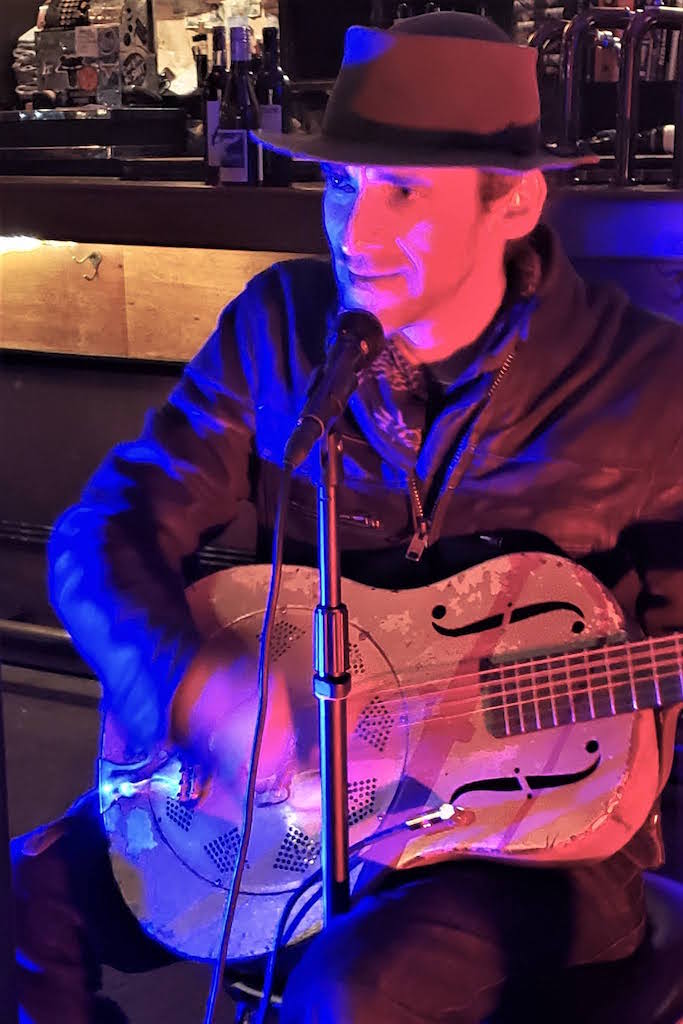 Karl Schwarz playing at Marshall Stack, a venue where the musicians play indoors by an open window to an audience seated outdoors. (Photo by Everynight Charley Crespo)

BY EVERYNIGHT CHARLEY CRESPO | As 2020 approaches its end, the robust live music scene in New York City is a total upheaval of the more traditional model of only a year ago.

Following the closure of all the venerated music venues eight months ago, live music refused to die. Instead, the musical landscape adapted to a new reality. It then altered frequently and often radically. Additional modifications appear to be imminent.

In mid-March, the city’s live music industry suddenly shuttered due to COVID lockdowns and curfews. By mid-June, however, many adventurous musicians came out of hibernation and started performing for tips in parks and other public spaces. Numerous bars and restaurants then began hosting live music, often with musicians playing indoors through open windows to audiences seated at tables outdoors.

For the most part, the venues that hosted live music a year ago are no longer booking live entertainment. Most of the live music in New York City is being played in restaurants that never before hosted it. This came about because musicians simply asked restaurant owners if they could play for tips.

Governmental restrictions initially allowed solely for “incidental music” and prohibited establishments from advertising or charging for entertainment; while this restriction was overturned in court a few weeks later, most establishments continue the prior policy.

Travel restrictions, where outsiders from many states and countries entering New York State must quarantine for 14 days, makes touring unreasonable for performers. Hence, only local musicians are playing for live audiences — although the public often does not know where or when.

As of this writing, restaurants are allowed outdoor seating, plus 25 percent indoor capacity. The speculated increase to 50 percent capacity has not yet happened, and is unlikely to for several more months.

With outdoor dining more feasible than indoor dining right now in smaller restaurants, many eateries have hired carpenters to construct contained seating areas both on sidewalks and in what were formerly parking spaces in the streets. Many establishments recently increased their investment by weatherproofing their outdoor spaces and purchasing outdoor heating fixtures. Despite these snowballing investments, recent COVID spikes in certain communities threaten to close indoor dining again in the near future.

Many other impacts have been more drastic. The current long-term state of affairs is ominous for venues with outstanding leases. This has led to alliances among independent music club owners, who are soliciting the federal government for across-the-board bailout funds.

Blackthorn 51, in Elmhurst, Queens, and Max Fish, at 120 Orchard St., are among the latest local music venues that have surrendered and closed their doors, hoping to sign leases in new locations at a future time when bars and restaurants can operate at 100 percent capacity.

The Bowery Electric, at 327 Bowery, has become a pay-per-view livestream-only venue.

Two nights each week, City Winery, at Pier 57 in Hudson River Park, requires patrons to pay for a mandatory COVID test on premises before entry.

Hermana NYC, at 349 E. 13th St., is temporarily closed because someone tested positive for the virus.

The newest changes are a result of colder weather. Many restaurants recently began closing on Mondays and Tuesdays, and those that remain open are seeing light attendance, as these are typically nights when fewer diners eat out. Meanwhile, the owners of sidewalk cafes that have attracted clientele with live music are strategizing how to transition from outdoor music to indoor music.

Dozens of bars and restaurants will continue presenting live musicians well into the winter, barring any new governmental restrictions.

City Winery features live music indoors on Thursdays through Sundays, and its new venue’s massive size allows for tables to be set far apart; many other safety protocols also are in place.

Dröm, at 85 Avenue A, and the Red Lion, at 151 Bleecker St., have discontinued outdoor music in favor of indoor music only.

Caravan of Dreams, 405 E. Sixth St., and Nomad, 78 Second Ave., are alternating between indoor and outdoor music, as the weather dictates where the bulk of the audience will sit.

The Anyway Café, 34 E. Second St., which in milder weather had its musicians perform in its window, has shifted the staging in order to accommodate both indoor and outdoor audiences.

At Pinky’s Space, 70 E. First St., musicians play in the covered outdoor dining area or on the sidewalk.

Numerous other cafes are exploring how to continue presenting live music in colder weather.

The good news is that dozens of local musicians are performing to live audiences every night. Knowing in advance who is performing and where, however, is information that remains difficult to attain.