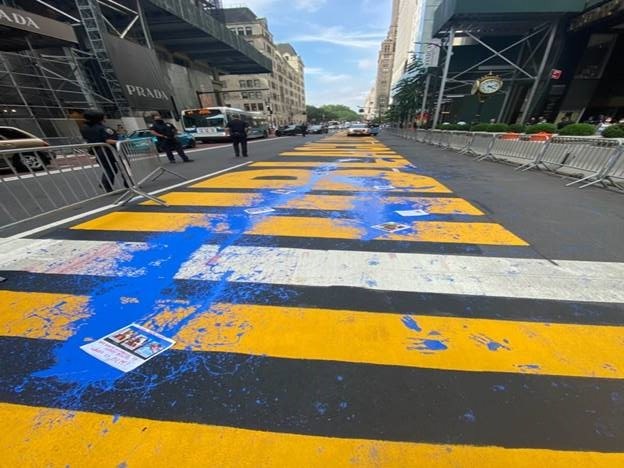 A group of Black Lives Matter-dissing vandals really “blue” it, falling right into the hands of police — due to the paint on their hands.

Responding to a call Friday afternoon that people were defacing the Black Lives Matter mural outside Trump Tower, officers arriving at the scene found four individuals near the street slogan with blue paint on their hands and clothing, police said.

Surveillance video showed three of the four suspects pouring and smearing paint on the Fifth Ave. mural and a woman also laying fliers on the ground at the scene.

The four suspects were arrested.

A 64-year-old female was issued a criminal court summons for illegal posting of fliers. A police spokesperson said this suspect’s name was not released publicly since she only got a ticket.

Three individuals were charged with criminal mischief and released with desk appearance tickets, including Juliet Germanotta, 39, of 410 W. 40th St., in Manhattan; Luis Martinez, 44, of Brooklyn; and D’Anna Morgan, 25, of Queens.

The Black Lives Matter mural outside Trump Tower was laid down by Mayor de Blasio, Reverend Al Sharpton and others. It has been the scene of clashes between factions for and against the social-justice movement. The street mural was previously smeared with red paint, but promptly repainted.

A week before the mural was painted, Donald Trump, in a tweet, accused it of “denigrating this luxury avenue.”

But de Blasio tweeted back, “The fact that you see it as denigrating your street is the definition of racism.” He later added, after the street painting was completed, “And, in fact, I think that mural liberates Fifth Avenue.”