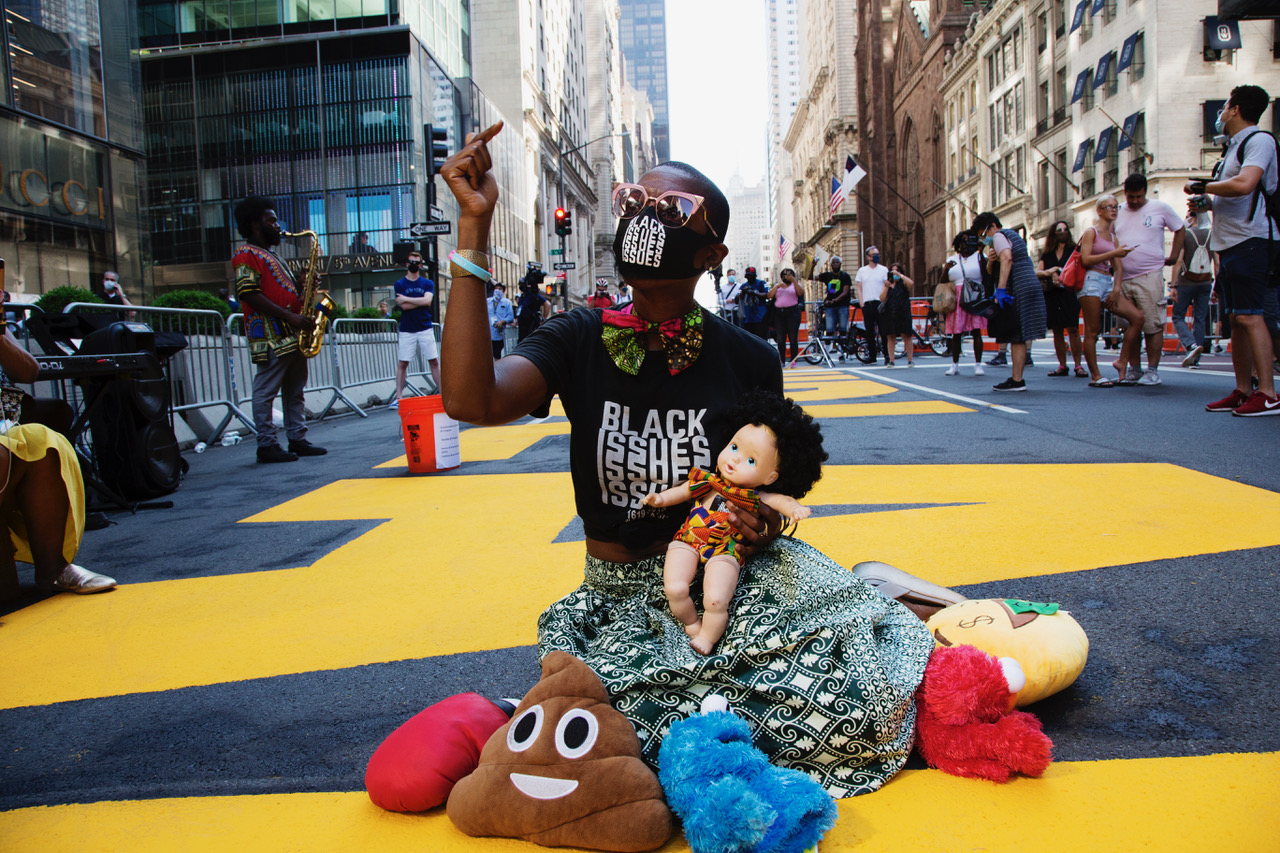 A woman did a performance outside Trump Tower with props, including a baby doll, the Cookie Monster, Elmo and a poop. (Photo by Q. Sakamaki)

In your face, Trump!

Also with them was Iesha Sekou, C.E.O. of Street Corner Resources, who helped inspire the idea of painting Black Lives Matters murals on streets all around town.

Last week, however, Trump had angrily blasted the scheme in back-to-back tweets, claiming it would “denigrate the luxury of Fifth Avenue.”

“NYC is cutting Police $’s by ONE BILLION DOLLARS, and yet the @NYCMayor is going to paint a big, expensive, yellow Black Lives Matter sign on Fifth Avenue, denigrating this luxury Avenue,” the tweeter in chief wrote. “This will further antagonize New York’s Finest, who LOVE New York & vividly remember the….

“….horrible BLM chant, ‘Pigs In A Blanket, Fry ‘Em Like Bacon’. Maybe our GREAT Police, who have been neutralized and scorned by a mayor who hates & disrespects them, won’t let this symbol of hate be affixed to New York’s greatest street. Spend this money fighting crime instead!”

De Blasio responded with a tweet of his own on July 1, calling Trump’s tweets racist.

Here’s what you don’t understand:
Black people BUILT 5th Ave and so much of this nation.
Your “luxury” came from THEIR labor, for which they have never been justly compensated.
We are honoring them. The fact that you see it as denigrating your street is the definition of racism.

At his press conference this Friday, de Blasio again fired back at the president, saying that rolling out the street mural was emotionally powerful.

“And yesterday, to me, was a response to that,” de Blasio declared, “a response to the notion that the most powerful voices and platforms in this land have turned to hatred, not to peace and respect and love. And it was important to not just have the Black Lives Matter murals in other parts of the city, other crucial locations, which have also been very emotional and powerful, but this one had a particular meaning, because we had to send a message to the seat of power.

“We have to send a message to the president of the United States that Black lives matter and he cannot do anything to stop that,” de Blasio stressed. “That all of the hatred that he propagates, all the efforts that he has created to try and take us backwards — they just won’t work. It’s too late, we’re moving forward.”

As opposed to Trump, de Blasio called Black Lives Matter a “positive, forward-looking message of righting a wrong and creating a true respect for people’s value.

“And when the president tweeted a few days ago that this mural…would ‘denigrate the luxury of Fifth Avenue,’ that was one of the purest statements of racism I’ve ever heard,” the mayor accused. “And the last place you’d want to hear that statement of racism is from the person who’s supposed to represent all of us.

Among others praising the Fifth Ave. BLM mural was Mia Farrow, who called it “so right!”

Fifth Ave was built by black people. To have #blackLivesMatter painted on the street is awesome and so right!! #iLoveNewYofk