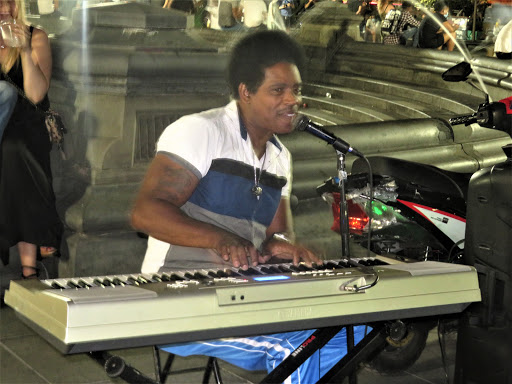 BY EVERYNIGHT CHARLEY CRESPO | Even a pandemic cannot stop rock and roll, as musicians plug their guitars into their amps and perform for Manhattan audiences. These musicians are playing free shows in parks and community gardens, on sidewalks, on subway platforms and at sidewalk cafes, hoping to persuade socially distanced listeners to drop dollars into tip buckets. These are some of the musicians who were rocking the town this summer with live, energetic performances, and are still continuing into the fall.

The Band in the Park

Old friends reunited after 15 years apart and are playing funk and rhythm and blues hits from yesteryear. The band does not have a name yet other than, “We are the band in the park,” meaning both Washington Square Park and Tompkins Square Park.

Originally from Tucson, Arizona, Cancion Franklin is now based in Brooklyn and leads a blues-rock trio, playing songs from his two EPs at Marshall Stack on alternate Saturday evenings.

Leroy Webb says, “My name is Lee and I play R&B,” several evenings each week at Washington Square Park.

The Meetles are best known for playing rousing Beatles covers to large crowds in the Times Square subway station and in Tompkins Square Park.

Early on Saturday afternoons in Tompkins Square Park, Claudi Love plays indie-rock originals as a solo performer. By the time the rest of the band arrives, Pinc Louds enchants large crowds of new fans. The band performs in subway stations as well.

On alternate Saturday evenings, David Pattillo sometimes does a solo set. But when the whole band is together, Strange Majik’s guitar jams rock inside Marshall Stack to audiences seated outside.