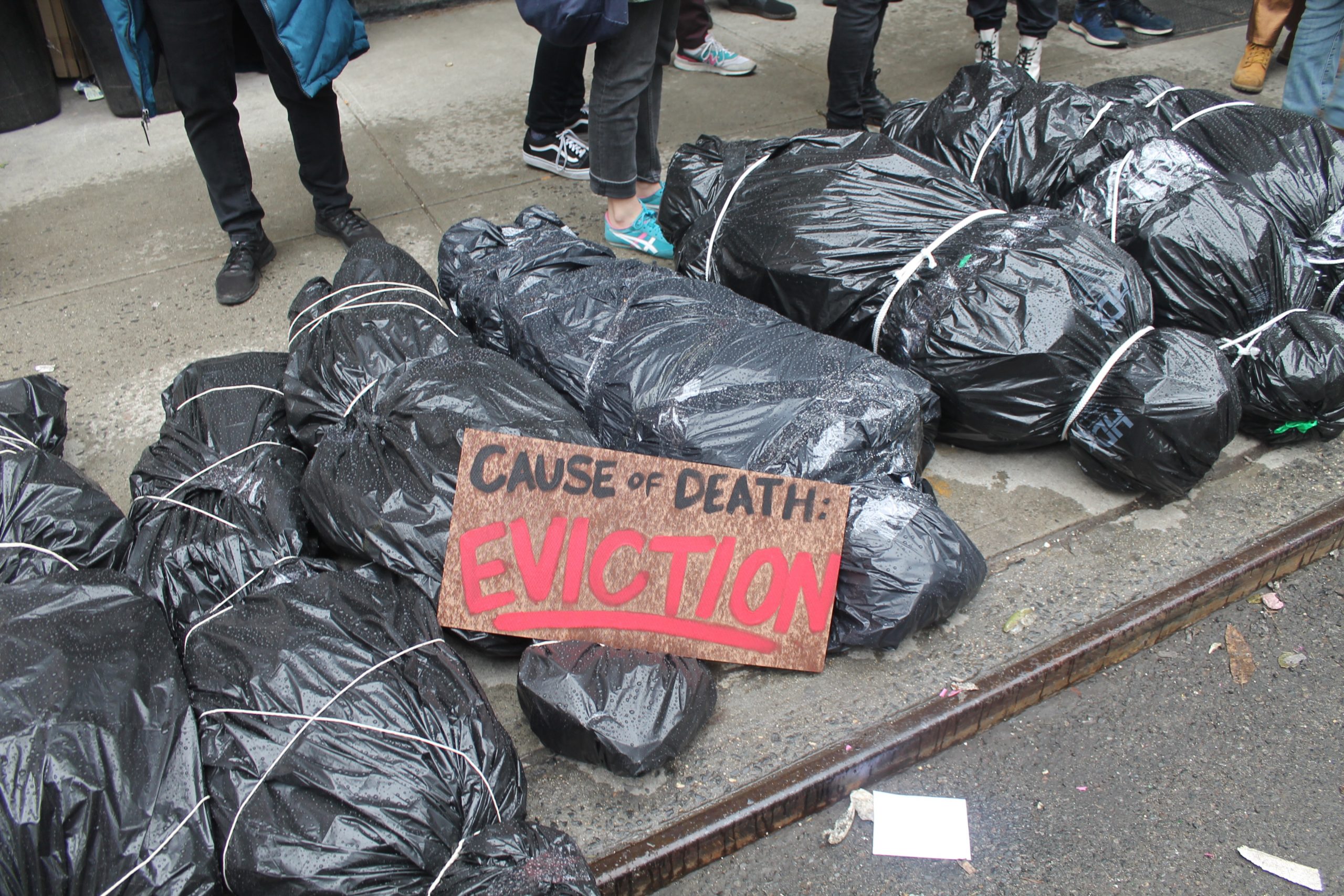 BY LINCOLN ANDERSON | Updated March 1, 10:00 p.m.: Brooklyn tenant activists laid a row of black “body bags” along the curb outside Brian Kavanagh’s East Village home on Sunday afternoon. It was a stark warning of what they said could happen if rent is not “canceled.”

“Cause of Death: Eviction,” read a sign next to the “corpses.”

Also scattered on the sidewalk near the stuffed trash bags were a couch, a bed, a bookcase and a microwave oven, representing the possessions of evicted tenants.

“Housing is a human right! Not just for the rich and white!” the protesters chanted.

The activists staged the action outside the state Senator’s E. Third St. home because they said his two pieces of rent-relief legislation to help tenants during the pandemic are, in fact, “half-measure, means-tested bills” — and just too complicated, to boot.

They also charged that the state senator’s bills do not protect those who get paid in cash and freelancers, among others.

“Brian Kavanagh, he likes everyone to believe he’s the smartest guy in the room,” one speaker scoffed. “If we need to take over the legislative building, we’ll do it. We’re not shutting up. We’re not going back.”

Kavanagh’s state Senate District 26 includes the East Village, Lower East Side and Lower Manhattan, as well as most of northern Brooklyn edging the East River, from Greenpoint to Carroll Gardens.

The protest had an urgent air because the following day, Monday, Housing Court was due to reopen. The demonstrators planned to reassemble Monday morning outside Housing Court, at 141 Livingston St., in Brooklyn. However, the moratorium on residential evictions is still set to continue through at least May 1.

“Each bill he has put out on this since the pandemic started has been a failure,” she said.

She noted that the state senator’s bill required tenants to fill out a “hardship form.”

“No one knew about it,” she said of the form. “They’re doing a bad job of publicizing it.

“All the bills are very complicated,” she added.

On the other hand, Lazur said the “gold standard,” in terms of rent-relief bills, is the Rent Mortgage and Cancelation Act, sponsored by state Senator Julia Salazar and Assemblymember Yuh-Line Niou.

Under that bill, landlords would forego collecting rents during the pandemic and would get compensated through a government-funded repayment scheme, tapping into a $3-billion pot of federal cash.

Lazur said, however, that because Kavanagh chairs the state Senate’s Committee on Housing, he is exerting his power to prioritize his own bills.

If Kavanagh was at home on Sunday during the protest, he was lying low and did not show himself. At one point, one of the organizers announced Kavanagh’s cell phone number and urged everyone to call him right then and “tell him to cancel rent.” Everyone whipped out their phones and dialed.

“The mailbox is full!” someone called out.

“Text him!” the organizer shouted back.

“Do you have an e-mail?” someone asked.

In the end, everyone texted Kavanagh the message, “Cancel rent and end eviction.”

Speaking afterward, Jenny Wong, another member of Crown Heights Tenant Union, said, “Our message is delivered to his cell phone but no response.”

At the end of the rally, the furniture and body bags were loaded into a waiting U-Haul truck.

In addition to Crown Heights Tenant Union, other organizers of the protest included Brooklyn Eviction Defense (BED) and the Party for Socialism and Liberation (PSL).

Meanwhile, Stanley Davis, Kavanagh’s chief spokesperson, said the state senator has been fighting to block evictions and get government funding for tenants who can’t pay rent during the pandemic.

On Monday evening, Davis issued the following statement to The Village Sun:

“First, Senator Kavanagh has worked from the very beginning of the pandemic to ensure that there is a moratorium on evictions in place. This was accomplished for most of 2020 through executive orders and administrative directives of the courts. In late December, a bill sponsored by Senator Kavanagh and Assemblymember Jeff Dinowitz, the COVID-19 Emergency Eviction and Foreclosure Prevention Act of 2020 (S9114), was passed by the Legislature and signed by the governor. It is among the strongest eviction moratoriums enacted by any state legislature anywhere in the nation, protecting anyone who is experiencing financial or medical hardship due to COVID-19 from being evicted at least until May 1.

“To be protected, the tenant simply has to check a box and sign and submit a form attesting that they have experienced the hardship. The legislation offers similar protections for homeowners who might otherwise face mortgage or tax foreclosure, with a moratorium also through May 1.

“Second, Senator Kavanagh has advocated from the beginning of the pandemic for federal funding to cover rent tenants have been unable to pay during the pandemic. The federal government provided $1.3 billion of such assistance for New York in a bill Congress passed in December; the next federal relief bill is expected to provide about a billion more. Senator Kavanagh’s legislation with Assemblymember Steve Cymbrowitz, the COVID-19 Emergency Rental Assistance Program (CERAP) (S2742A), seeks to pay off the accumulated arrears of any tenant who was unable to pay their rent due to COVID-19. The bill conforms to the statute and regulations stipulated by the federal government on the use of the funds.

“New Yorkers would be eligible for the program regardless of immigration status and it would pay up to 12 months or rent and utility arrears and up to three more months of prospective rent and utility costs.

“The goal is to get this legislation passed and get the money out as quickly as possible to eliminate the stress and financial hardship that many New Yorkers have felt due to burgeoning rent debt. The bill is cosponsored by 35 of the 43 Democratic state senators, the Legal Aid Society, Citizen Action of New York and other pro-tenant organizations. It is on the agenda of the Senate Housing Committee, which Senator Kavanagh chairs, tomorrow morning.

“Finally, Senator Kavanagh is also advocating for his Housing Access Voucher Program legislation (S2804) (also cosponsored by Assemblymember Cymbrowitz), which would provide rental assistance for permanent housing for homeless families and individuals. The program would be modeled on the federal Section 8 program, but funded with a new allocation of state funds. This bill is cosponsored by 30 senators and is a priority of many advocates for homeless New Yorkers.”