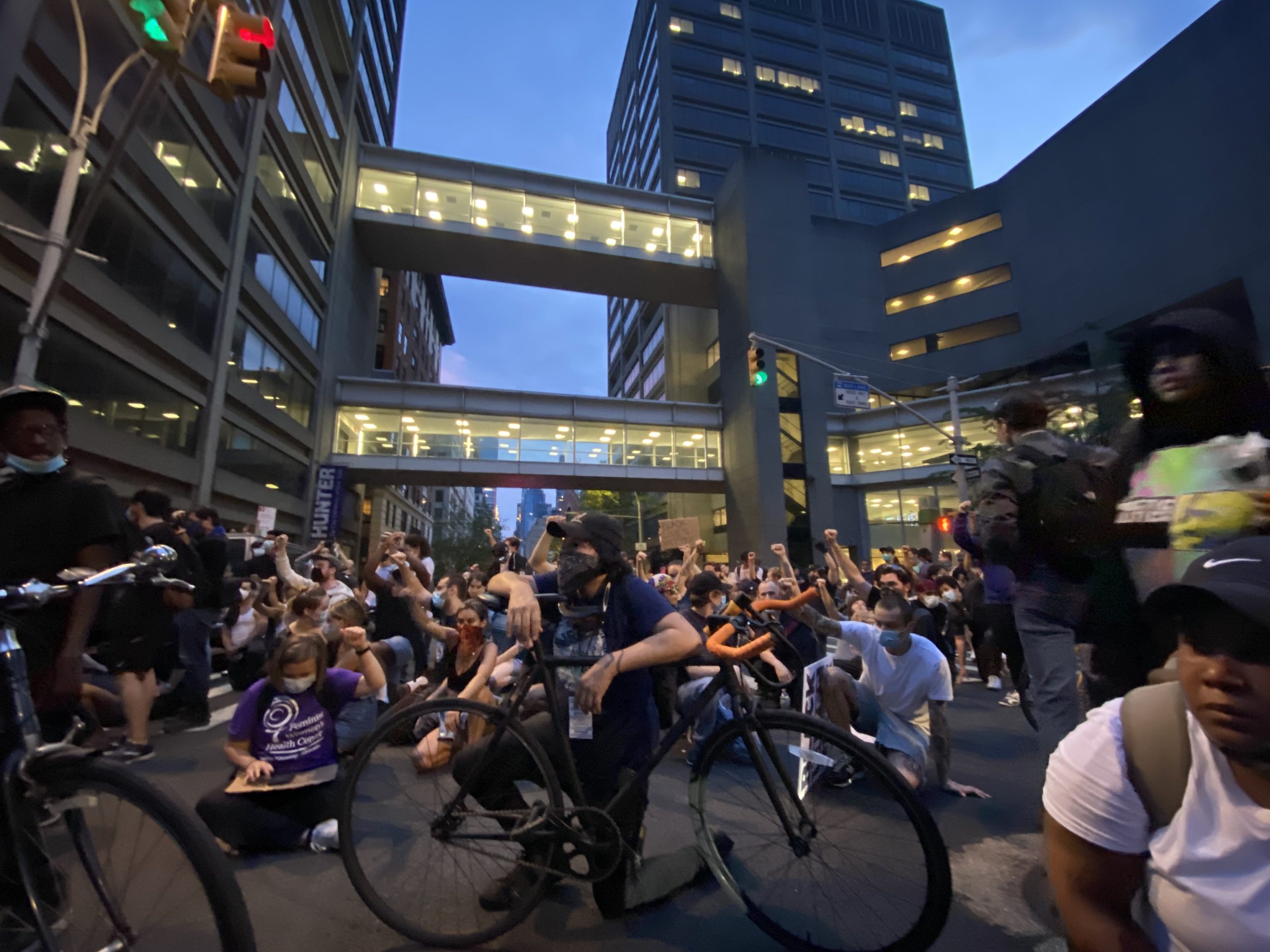 Protesters out after the curfew on Wed., June 3, take a knee on Lexington Ave. outside Hunter College. About 20 minutes later, police began aggressively making arrests and trying to disperse the crowd. (Photo by Sam Vincent Wizon)

Brutal arrests of protesters changed my view of police

BY SAM VINCENT WIZON | On June 3, 2020, I would have used the following words to describe my feelings toward the police: Reform. Regulation. Reason. My digital trail from that day includes phrases like: “I don’t think we should defund the police” and “the police are hopefully working to protect the protesters.”

However, the wanton violence and excessive force I saw the evening of June 3 is seared into my memory; it has irrevocably and changed my opinion about the state of law enforcement in America.

On that Wednesday night, I joined a protest walking through Central Park toward the Upper East Side, heading for Gracie Mansion, the official residence of the mayor of New York City. The entire park near the mansion was barricaded by police; reaching it was impossible. After a powerful 8-minute silence among thousands of people, we moved south down York Ave. The protest remained completely peaceful, and we occasionally stopped to take a knee.

Just before 9 p.m., an hour after the citywide curfew took effect, at 60th St. and Third Ave., I began seeing sirens at the back of the protest, about three to five blocks behind the front of the group, where I was located.

We continued walking south, where I noticed the west side of 51st St., home of the 17th Precinct, was fortified with barriers and police with firearms.

Less than a minute later, numerous police vehicles, riot police and bicycle and motorcycle mounted police swarmed the front — and as I later learned the rear — of the protest. (The rear was attacked by the N.Y.P.D.’s Strategic Response Group, a heavily armed, rapid-response force for handling terrorist and similar emergency-like situations.)

The police, in full body armor, charged into our unarmed contingent of soft flesh, swinging their batons indiscriminately and with impunity. The crowd of 2,000 people — peaceful and unarmed — was now boxed in and being attacked by police on three sides.

The police began amassing more units to block crosstown blocks and build a larger perimeter, a tactic known as “kettling.” The feeling in the crowd shifted from unity and solidarity to sheer terror as claustrophobia and panic set in. I can remember the look of panic in people’s faces as police crashed into us, violently beating those unfortunate enough to be caught in the front; the message this sent was loud and clear.

I managed to escape on my bicycle, riding east on 50th St. to Second Ave., and I continued riding south, where I saw more police vehicles en route to the organized assault I had just left. I cut west on 45th St., five blocks south of the police line, thinking I was now safe.

As I approached the intersection of 45th and Lexington, a man yelled at me and another cyclist, “THEY’RE HERE! THEY’RE HERE! FIND ANOTHER WAY.”

As I rode through the intersection, I saw several bikes strewn in the street. Groups of police tackled cyclists that were heading southbound. I could not believe my eyes.

At this point there were police visible north, south, east and west of my location. I froze, not knowing where to go. Another cyclist I was with was also panicking.

We decided to continue heading west. I had another 50 blocks home, in torrential rain. The police were everywhere. I felt a pit in my stomach each time the red and blue lights flickered around me. It was chaos. It was just dumb luck I made it home Downtown that night.

Many of my friends were not so lucky — they were arrested and brutalized by the police.

The media covered the story, but did not paint the full picture. In an official statement, Chief Monahan said that the police warned us to go home before making arrests. In the same statement, Monahan also cited looting as a justification for his attack, despite no reports of looting on the entire island at the time the assault.

Chief Monahan was a man I respected after I witnessed him take a knee with protestors at Washington Square Park the day before. Unfortunately, I am no longer of the same opinion after seeing his vicious, coordinated attack on innocent people, and his subsequent lies to the public.

The news did not cover the police tackling people off of their bikes five blocks away from the protest. It was heartbreaking to see photos and videos of the people I was just with being beaten with batons and lying facedown on the street. These were people who had their hands up, evidenced from the photo below, which was taken moments before the attack:

Look closely at what the police are wearing. Here is an article that covers what happened at 50th St. and Third Ave. that night. Watch the videos.

This occurred an hour after the 8 p.m. curfew. Some may think that is a justification for the violence since we knew that we were in violation. But the curfew is a scare tactic that empowers the police, criminalizes protest, and is being used as a reason to attack people indiscriminately.

Things like the curfew are the type of action that need to be resisted — these police-state scare tactics are only being deployed to mute people’s voices and literally beat down pleas for the police to stop their violence.

Most disturbing is that the curfew has little to do with “law and order.” I am a resident of the Soho neighborhood, an upscale shopping district; many of you have probably seen videos of large groups of people looting stores in Soho, starting fires and causing mayhem.

I watched more than 10 officers stand around a small trash fire, talking and laughing for more than 15 minutes while the sound of shattering glass echoed around the corner. Why did I watch the police allow my neighborhood to be looted, and two days later watch them violently assault a peaceful protest?

I can only speculate.

Maybe they wanted to make the mayor look bad. Or maybe, they wanted to let those videos of destruction and chaos in Soho surface to sway public opinion and justify their subsequent use of force on peaceful, innocent people.

My views on the police have completely changed over the last few days. I have little respect left for the N.Y.P.D. The above account is just my experience, which happened over the course of a mere three hours that felt like days.

I think it speaks to the violence that black people and other minorities face in this country daily. I cannot imagine the terror some of our fellow citizens live with on a daily basis.

My firsthand experience made me feel this pain and anguish more than any newspaper or television broadcast ever could have.

Police are a danger to millions of people in this country. To the most vulnerable, they act as a hostile, occupying force. Their choice to attack protestors while turning a blind eye to looters leads me to believe they have a political agenda that is not in the interest of the people.

They are a weaponized force that is designed to defend their monopoly on violence at all costs. They do not want to disarm. They do not want to be held accountable. We need major defunding of police, massive police reform, and civilian reviews with real power to keep citizens of the United States safe.

A native New Yorker who grew up in New Jersey, Wizon has lived in New York City for the past 10 years, including seven years in the East Village and the last three in Soho. He currently works as a software developer at BroadPeak Partners, and for the past three years has volunteered as a high school teacher for CodeNation, a nonprofit aimed at increasing equity in technology. A New York University graduate, in August he will start attending Boston College Law School.