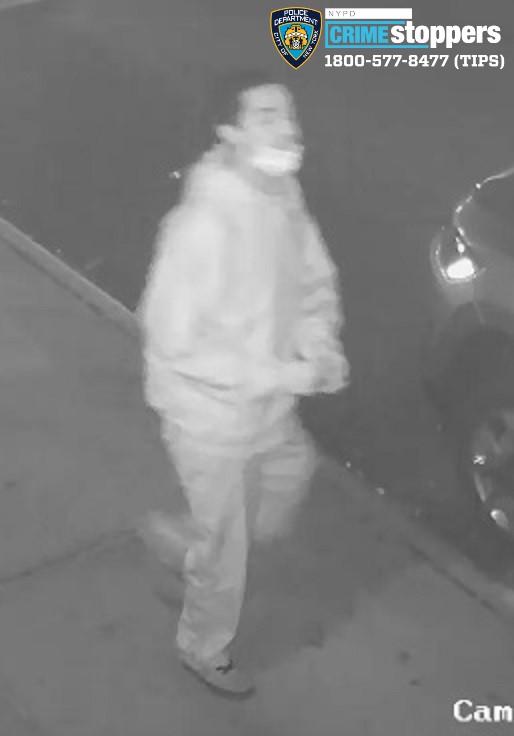 One of the members of the alleged burglary ring. (Courtesy N.Y.P.D.)

BY THE VILLAGE SUN | Police are looking for a group of men in their mid-20s in connection with a Lower East Side burglary pattern, with all the incidents happening either on or near Hester Street.

According to cops, in the first burglary, on Mon., Dec. 13, around 2 a.m., the perpetrators entered a commercial office at 120 Walker St. through the window. Once inside, they stole various electronics valued at around $57,419.

About 45 minutes later, one individual entered a grocery store at 94 Hester St. by breaking the front gate with bolt cutters. He stole Lotto tickets and around $2,500 in cash.

The next morning around 8:17 a.m., according to police, a 22-year-old man returned to his apartment at Hester and Baxter Streets and found his apartment lock broken. The victim said that one of the bedrooms was ransacked and that gone were jewelry and electronics valued at about $11,500, credit cards and roughly $200 in cash.

Soon afterward that same day, Tues., Dec. 14, around 8:40 a.m., a 26-year-old man came home to his apartment at Hester and Mulberry Streets and discovered electronics missing valued at roughly $824. The thief or thieves had gained entry through the fire escape window.

Police say they are looking for five unidentified males, all roughly in their mid-20s, in connection with the string of break-ins.

Cops released surveillance photos and video of the alleged suspects taken from the first incident location.

Police aske that anyone with information call the N.Y.P.D.’s Crime Stoppers Hotline at 1-800-577-TIPS (8477) or for Spanish, 1-888-57-PISTA (74782). Tips can also be submitted on the Crime Stoppers Web site at crimestoppers.nypdonline.org or on Twitter at @NYPDTips. All tips are strictly confidential.