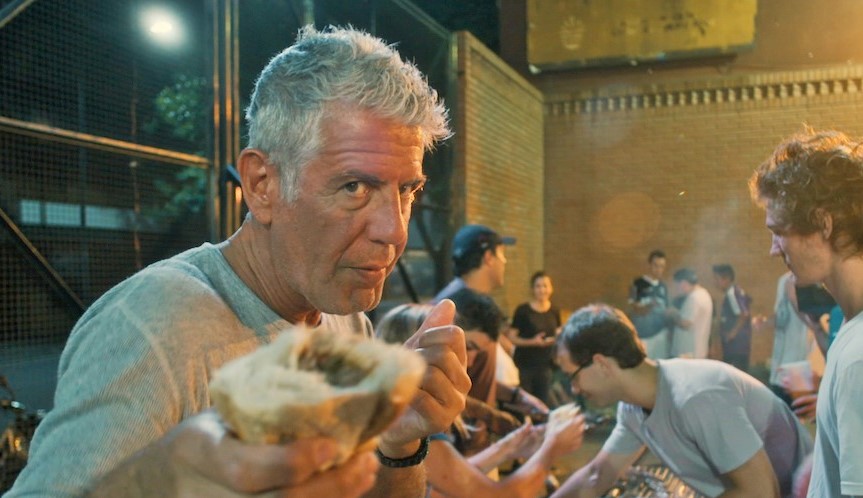 A shot from "Roadrunner: A Film About Anthony Bourdain."

BY AIDAN SEIDEN | The documentary “Roadrunner: A Film About Anthony Bourdain,” released in theaters last month, is a visceral and heartwarming portrait of the late celebrity chef-turned-best-selling author-turned television star. In the film, the story of his intrepid life is narrated by Bourdain himself and by the people on whom he had the most profound influence.

Morgan Neville, the film’s award-winning director and producer — acclaimed for his poignant film “20 Feet from Stardom” — orchestrates the behind-the-scenes story with compilations from thousands of hours of recorded video footage and archived audio clips. Each second captures Bourdain’s meteoric rise to success and the consequences that followed.

“What the f— am I doing here,” Bourdain’s cigarette-strained voice remarks at the start of the film. “One minute I was standing next to a deep fryer. The next I was watching the sun set over the Sahara.”

Neville begins the documentary in 1999, when Bourdain was a simple, yet flawed, 43-year-old executive chef at Brasserie Les Halles, content in believing that his life’s “entertainment and excitement segment” was over. However, as his best-selling book “Kitchen Confidential” gained popularity, it catapulted Bourdain and his career to heights previously inconceivable  and undesired — by him.

“Don’t let me do TV. If you ever see me do TV, shoot me,” Bourdain would insist to his friends. But after his book’s publication, producers Lydia Tenaglia and Christopher Collins pitched Bourdain on “A Cook’s Tour,” a television show that followed him around the world while he ate “weird shit,” as Collins puts it.

While in Japan and Vietnam, Tenaglia quickly noticed that Bourdain was uneasy in front of the camera. But after a few weeks, Bourdain’s discomfort dissipated and his loveable disposition shined through — whereupon he happily assumed the role of third producer.

Within a few years, this once-introverted New York City chef — who found refuge from the “suspicious” and “uncontrollable” outside world behind his kitchen doors — had become a globe-trotting, world-renowned cultural icon. In doing so, he earned the respect and admiration of fellow luminaries such as Anderson Cooper and Oprah Winfrey.

However, as his professional life began to soar, his personal life started to suffer. From first-hand interviews with Bourdain’s second wife, Ottavia Busia, and close friend David Choe, Neville brilliantly portrays the sad reality of how fame and success can often also bring unfortunate consequences, with Anthony Bourdain being no exception.

Neville was able to document Bourdain’s descent into agoraphobia and isolation through the incorporation of his real-time personal Instagram stories. This allows the audience to witness Bourdain becoming cut off from friends and family, as well as seeking therapy for his mental health.

The documentary concludes, following Bourdain’s death, with each person describing for the camera the profound impact losing Bourdain had on them, and how it drastically changed the course of their lives. Members of the celebrity chef’s TV camera crew, his former boss and his brother each express just how exceptional a man he was.

Regardless of whether you enjoy documentaries or culinary-based films, this movie serves as a powerful postmortem of an extraordinary man’s journey through life, fame, drugs and mental illness. This story will capture your attention and leave you questioning how, despite everything, Bourdain was able to preserve his joie de vivre, and impact the lives of everyone he touched.

As his close friend David Choe notes, “I’ve never met anyone else like him.”