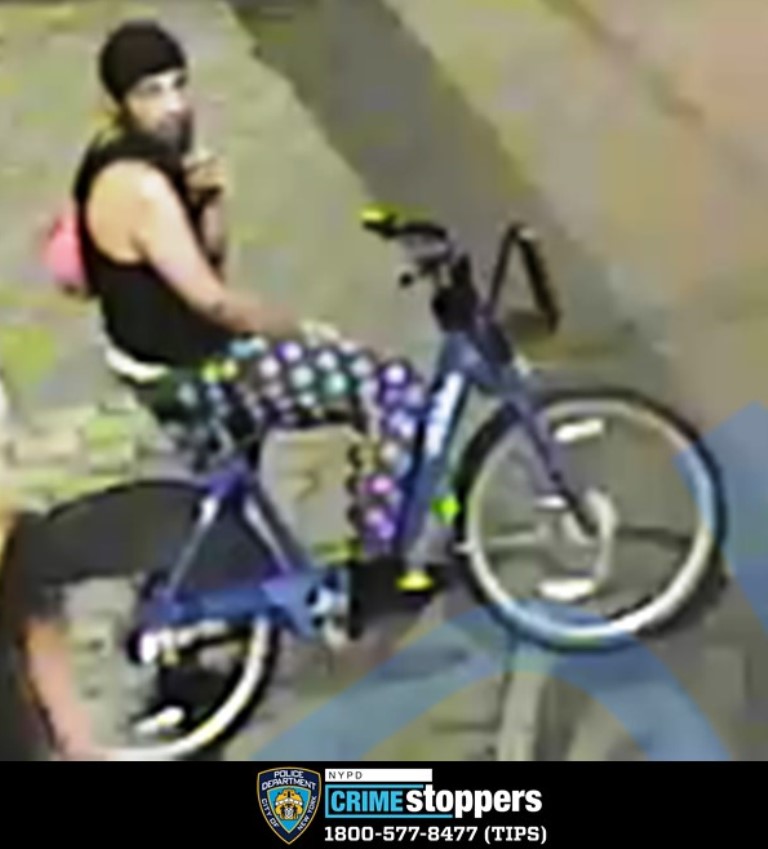 The rolling robber, seen seated on a Citi Bike, wears flashy pants and a pink pouch — maybe to stash his haul of cell phones. (Courtesy N.Y.P.D.)

Bike-by cell-phone snatcher on a roll around Washington Square

BY THE VILLAGE SUN | What the cell?!

A brazen, bike-riding thief has been pedaling around Greenwich Village swiping cell phones right out of people’s hands as they stand obliviously peering or talking into them on street corners.

Police say there were 10 reported incidents between Tues., July 12, and Sun., July 17, mostly occurring in the area around Washington Square and always under cover of darkness.

None of the victims were injured.

The cell-phone snatcher first struck on Tues., July 12, around 9:20 p.m. at the corner of Washington Square South and W. Third Street.

Just five minutes later, he made off with someone’s phone at the corner of Sixth Avenue and Eighth Street.

The following evening, Thurs., July 14, he was back in the saddle once again, stealthily stealing someone’s cell at 8:30 p.m. right near the entrance to the W. Fourth Street subway by “The Cage” basketball court.

An hour later that same night, he was “going mobile…theft” again, grasping a phone as he pedaled by the corner of Mercer and W. Third Streets.

Thursday was a three-fer, a busy night for the rolling robber. At two minutes before midnight, he whisked by someone at the corner of Washington Square North and Washington Square West, leaving yet another phone-deprived victim in his sustainable wake.

The biking bandit didn’t take a break on the weekend. According to police, on Sat., July 16, around 10 p.m., the same guy plucked away a person’s phone in front of 1 Washington Square South, N.Y.U. School of Law’s Vanderbilt Hall, near the southwest corner of Washington Square Park.

It’s unclear why he drifted north of his usual hunting ground — hungry maybe from so much phone stealing? — but on Sun., July 17, around 12:30 a.m., the cycling thief took a person’s phone in front of Five Guys burgers, at 56 W. 14th St, just east of Sixth Ave.

This riding robber really gets around, though, because only 15 minutes later he targeted someone in front of 73 W. Third St., between Thompson Street and LaGuardia Place, chalking up yet another cellular theft.

From there, the busy crook this time spun his wheels a bit farther south, when on early Sunday morning around 1:16 a.m., another unlucky pedestrian was surprised to suddenly lose his or her phone at the corner of Sixth Avenue and Downing Street.

Police released surveillance photos and video of the suspect from the sixth incident, which occurred at the northwest corner of Washington Square.

Cops describe the suspect as having a thin build, a beard and a Caesar haircut. He was last seen riding a nonelectric Citi Bike, wearing eye-catching multicolored pants, a black tank top and sneakers and toting a small hot-pink pack on his back — perhaps to stash the stolen phones?