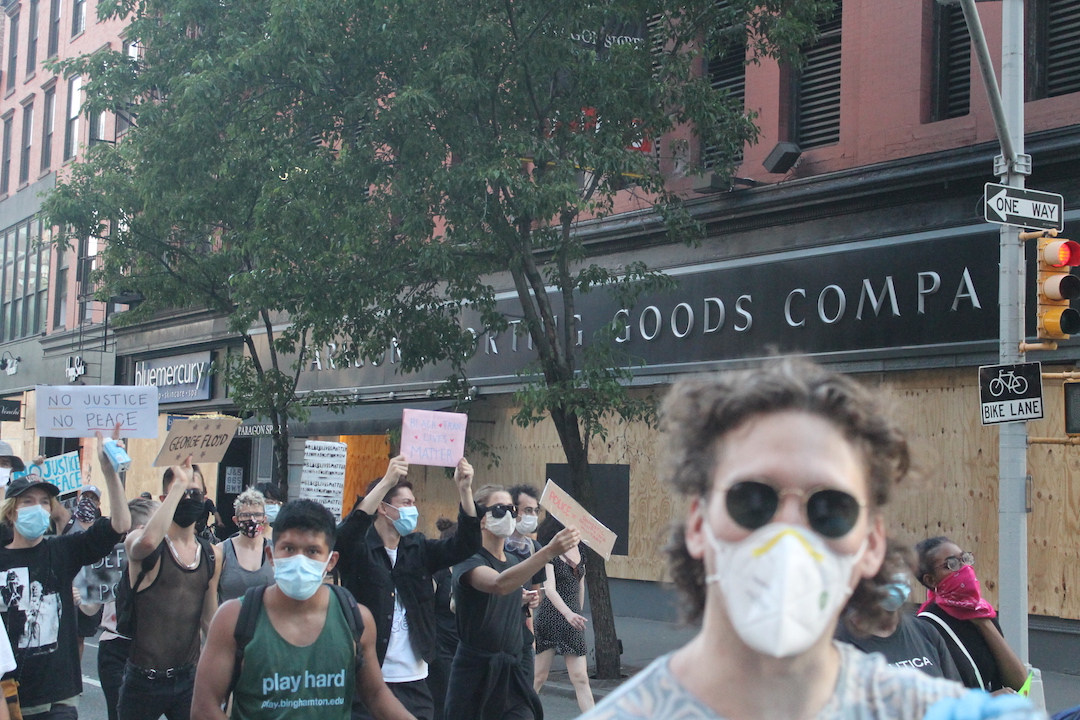 BY THE VILLAGE SUN | Many local businesses took a beating during the recent looting, no question about it.

Nevertheless, despite all the damage, local business improvement districts — along with individual merchants — are making a point of showing support for the ongoing Black Lives Matters protests for justice and racial equality.

The Village and Union Square have always been places to speak out and rally for social change, the BIDs’ directors stressed, adding that it’s a tradition so strong that it can’t be trashed, even by a few bad apples responsible for the recent shocking events.

On June 6, Jennifer Falk, executive director of the Union Square Partnership, sent out a letter to members and local residents affirming the BID’s commitment to ending entrenched racism and to healing. While at least 24 local businesses in the BID’s catchment area were vandalized or looted, Falk said the Partnership remains committed to the sanctity of free expression and the right to peacefully protest.

“First and foremost,” Falk wrote, “the Union Square Partnership’s membership has been deeply disturbed by the cascade of events, starting with the grievous death of George Floyd, which have rightfully resulted in protests in cities across the country against entrenched racism in all its forms, and the inequitable burden placed on minority communities during this pandemic. We acknowledge the pain, grief and anger felt by the Black community. The Partnership firmly supports the quest for racial justice, condemns racism in all forms, and believes that Black lives matter now, and always.

“Union Square has been a venue for public demonstrations in pursuit of social change for generations,” Falk noted. “It is one of the primary places people from all over the region come to congregate for the expression of free speech — a legacy that we cherish and uphold. Consequently, our neighborhood became a focal point of the ongoing protests. Unfortunately, a small percentage have exploited the environment of peaceful protest for misbehavior and worse.”

Referring to the businesses in the BID’s area that were vandalized or looted, Falk wrote, “This is a very painful turn of events as these impacts compound the enormous, unprecedented challenges our businesses were already experiencing from the COVID-19 pandemic.

However, she said, “While our community has suffered disruption and damage, this does not discharge us of our obligation to continue to accommodate free expression in the pursuit of justice and much-needed societal change.

“We feel deep regret and remorse for the recent events we have witnessed, and we will be looking over the next weeks and months for ways to see how the Partnership can play a constructive role in healing and working to build toward a more equitable society for all.”

Included in Falk’s letter were statements of support for racial justice from several prominent Union Square Partnership members, including two businesses that were looted, Paragon Sports and Rothman’s men’s clothing.

“Paragon had closed due to COVID-19,” the sporting goods store wrote. “Ten days ago our bike shop opened as an essential service. Less than 24 hours later our windows were smashed and bikes were stolen… . We value lives over property. We will not be silent. Black lives matter. Together we are louder. Together we are stronger.”

“Rothmans NYC was looted last night,” the haberdasher wrote. “While [this was] unfortunate, we will definitely get back up. We recognize that this is a moment of profound anger in this country, and we support those who are working to achieve justice for Black Americans.”

Andrew Hamilton, president of New York University, said, “Once again, we find ourselves filled with sorrow, outrage and grief over a loss of yet another Black person’s life at the hands of law enforcement that was tragic, unjust and avoidable. To deal with this and other terrible recent events, while simultaneously navigating a pandemic that is giving rise to differential impacts on communities of color is especially oppressive. But reason, discourse, study, evidence, analysis — those are our tools, and this heightened focus on social justice should cause us to redouble our exertions to use them in the cause of addressing racism, violence and hate to underscore human dignity, inclusion and peace.”

Dwight McBride, the new president of The New School, said, “This is a moment for us to come together in a spirit of support and solidarity during this time of anguish and unrest. The New School is committed to being a supportive, safe, welcoming and inclusive community for all who choose to work, study, learn, create and lead change here.”

The CVS store on the ground floor of The New School’s University Center, at 14th St. and Fifth Ave., was vandalized and looted.

Meanwhile, the Village Alliance, whose BID area includes Eighth St., parts of Sixth Ave. and University Place and Astor Place, was also hard hit. Nearly 50 of its storefronts were damaged or looted.

In a message to neighbors written before Saturday’s mass protest in Washington Square, William Kelley, the Village Alliance’s executive director, stressed that the Village has always been a place of revolutionary thought and action.

“With the current climate in our city and our country, we only felt it right to speak out on recent events,” Kelley wrote. “We are truly outraged and disheartened by the injustice, racism and acts of violence against the Black community. We fully support the Black Lives Matter movement and stand in unity with the Black, Indigenous and people of color that are in our neighborhood as stakeholders, business owners, educators, artists and friends.

“Over the past two weeks, the Village experienced both peaceful protests and a challenging few nights of vandalism,” he noted. “In total, 45 of our storefronts were damaged or looted, with 25 trash receptacles and nine planters burned — a tough situation given many small businesses preparing to reopen after COVID-19. Our sanitation team was on the ground immediately to ensure that our district rebounded quickly, and our office resources have been made available to impacted stakeholders.

“Although the week’s activities have certainly been emotional and challenging, it is important to keep perspective and not be distracted by the actions of a few opportunists and vandals,” Kelley stressed. “I urge you to listen to the message behind the protests, read more about the Black Lives Matter movement and talk frankly with your peers.

“Greenwich Village has historically been a neighborhood of revolution,” the BID director stated. “From Jane Jacobs’s fight to save Washington Square Park to Marsha P. Johnson’s efforts in the Stonewall Uprising and Angela Davis’s radical speak-outs against the Women’s House of Detention, the Village has served as a place for New Yorkers to gather and rally for change. As protesters make their way down from Harlem to our district today, we want to send them one message: We hear you, we see you, and together we will work for change.”