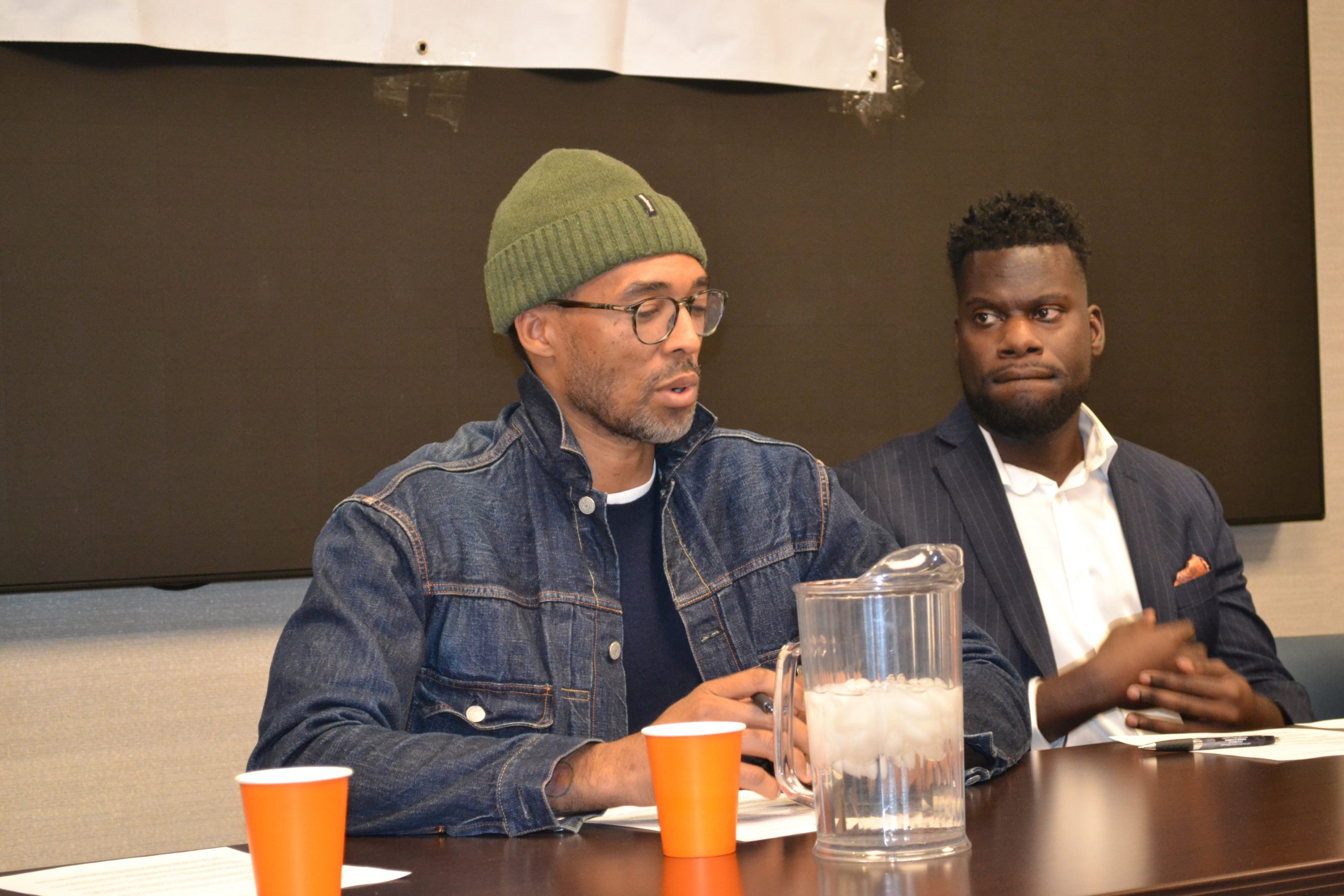 This expression is often invoked by the National Rifle Association to shut down efforts to regulate firearms. But participants in a recent panel discussion in the Village use the phrase to impress young people with the importance of taking personal responsibility for reducing gun violence in some of Brooklyn’s toughest neighborhoods.

The forum was sponsored by Village Independent Democrats and several other Manhattan Democratic clubs.

“We wanted Downtown Manhattan to learn what community groups in violent neighborhoods are doing to reduce demand for guns,” said Debra Sherman, one of the forum’s organizers. “We want to spread the word on how all New Yorkers can support that work.”

The discussion, held at Lenox Health Greenwich Village, at W. 12th St. and Seventh Ave., was moderated by Rebecca Fischer, executive director of New Yorkers Against Gun Violence, which is perhaps best known for fighting to regulate firearms.

Referring to the “iron pipeline” of guns along the East Coast, Fischer noted that “anyone can go to Pennsylvania and get a gun.”

Those guns often end up in the communities represented by the panel participants. Theirs is a world where gunshots are not unusual and conflicts too often result in bloodshed. But they emphasized that the answer isn’t more police, but rather public-health solutions to reduce violence of all kinds.

Dr. Rob Gore, an emergency physician and the founder of Kings Against Gun Violence, or KAVI, suggested that the problem of violence be reframed as one of trauma, not just guns.

“Environments that have a legacy of racism, poverty, violence and lack of economic opportunities are constantly stressful and create long-term trauma,” he said.

“We have to treat these issues holistically to achieve mental wellness,” he said, warning, “If we don’t address them, they will continue.”

Few are as close to the front lines of gun violence as Man Up, Inc., which operates in the East New York, Brownsville and Bedford-Stuyvesant neighborhoods of Brooklyn. Its representatives, known as “interrupters,” have their ears to the ground and are often able to intercede in volatile, potentially violent situations and stop them before they escalate. As former gang members, the group’s members have the respect of the community and have achieved great success in reducing gun violence.

Man Up works with community stakeholders, including residents, business owners and faith-based leaders, as well, to engage with young people most at risk of violence. Should violence erupt, Man Up works to address the traumas in the community. Most importantly, the group conveys the idea that violence is not normal. As Man Up interrupter Jeremy Arse — who’s known by his street name, Brother Curley — put it, his community work emphasizes that, “Love is just as powerful as violence.”

“These are kids who often resort to violence because they feel they have no other means and don’t have the coping mechanisms to deal with the difficult, often brutal, circumstances in which they live,” she said.

Getting the youths involved in policy discussions about guns has had powerful results, including reduced truancy.

“They come into our program feeling powerless,” Alexander said, but they leave as experts on the issues of gun violence.

Some of the youths even meet with politicians to promote gun legislation.

“The youngsters have a sense of growth and personal development that allows them not only to advocate for themselves, but their communities,” Alexander said.

ReACTION started out as an after-school program and has since become part of the curriculum in seven schools. Alexander would like to increase that number, expanding its programs to 40 schools.

“The money spent on these programs saves lives,” she said, “and has generational implications.”

Deputy Public Advocate Nick Smith talked about the work of The Crisis Management System, which helps oversee many of the community groups working to reduce violence in New York City. Funded with $36 million from the de Blasio administration and the New York City Council, C.M.S. coordinates a network of nonprofit providers in 22 police precincts. The nonprofits offer a range of services, from mediating conflicts on the street, to job training, employment opportunities and mental health services.

Some of these programs help imbue children in communities disproportionately impacted by gun violence with basic life skills, such as learning how to dress for and make a good impression at job interviews — skills that most middle-class kids take for granted.

The C.M.S. programs coordinate and complement each other, working not just with kids but also their parents.

“We know we won’t get action from the president and from Congress,” Smith said. “Cities are the laboratories of creative solutions to solve the problem of gun violence.”

All of the participants emphasized the need for continued and dependable sources of funding for C.M.S. and other community-based programs.

As Gore noted, “Community engagement isn’t sexy, but it works.”

V.I.D. has long advocated for commonsense gun regulation, but stepped up its efforts two years ago, after the epidemic of mass shootings.

“We saw how the students organized after the Parkland shootings, and felt that we had to get involved,” said club member Allison Stowell, co-organizer of the forum.

In June 2018, the club started a campaign to send postcards signed by members of the community to urge Governor Cuomo to support ERPO (Extreme Risk Protection Order).

This “Red Flag” bill will restrict gun possession by potentially violent family members. The campaign sent 1,300 cards to the governor, who signed the bill into law this past May.

“I think our postcard campaign helped contribute to the passage of New York’s ‘Red Flag’ law,” Stowell said. “We’ve been out in the Village talking to hundreds of people, old, young, black and white, getting a perspective on what people think about gun violence and raising awareness about how we can work together to make things better.”

“We still have more to do,” said Debra Sherman. “In addition to working to keep guns off our streets, we have to fight for grassroots organizations that are on the ground helping New Yorkers on a daily basis.

“As a mom,” said Stowell, “I don’t have much concern about the safety of my kids in the West Village. I want every mom and dad to have that same feeling. By building bridges and communicating with other communities where there are concerns, we can advocate for them and support them, strengthen their voices, and get them the resources they need.”

“When we think of fighting for regulating guns, we often think of large organizations that already have big dollars behind them,” Sherman added. “We have to make sure that grassroots organizations in our communities are recognized, appreciated and, most of all, properly funded.”

To that end, V.I.D. is working to send thousands more signed postcards to hasten the passage of five more laws to further reduce access to guns. Sherman and Stowell plan to continue the dialogue with the community groups represented at the forum, and to continue to advocate for them with elected officials.

“There’s reason to be optimistic,” Stowell said. “Gun violence in the city has dropped. We’ve seen that there are programs that work, and that there are constructive steps that New Yorkers can take to get involved and take action.”

V.I.D. provided the forum’s attendees with a list of practical suggestions for New Yorkers to help reduce gun violence. These include educational resources and information on grassroots groups that are working on behalf of communities throughout New York City. To learn more about these ideas, contact allison.stowell@gmail.com or drsconsulting.us@gmail.com .