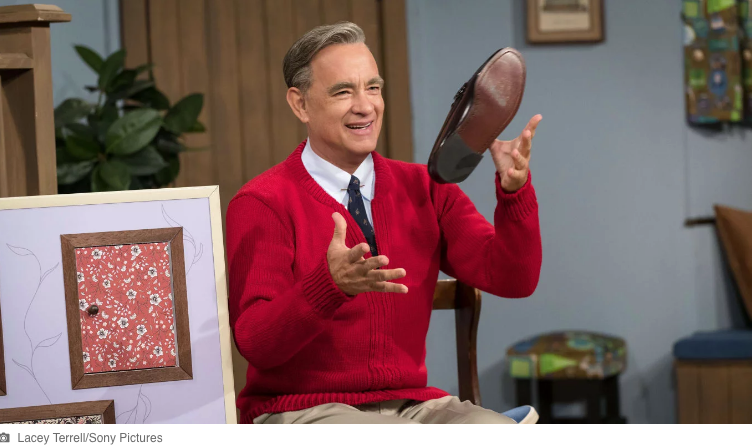 Be my neighbor… Hanks as Mr. Rogers embodies compassion

BY ARIBELLA PELLICANO | Everything has a season and right now it couldn’t be more seasonal than to see a film that is about things explored too rarely in life or cinema these days: forbearance, reflection and empathy.

Sounds heavy, right? Emotions are heavy, especially when honest feelings are opened up and faced. But as we discover in “A Beautiful Day in the Neighborhood,” they are not nearly as heavy as keeping them in and the collateral damage that comes with that unconscious choice.

We are talking about Mr. Fred Rogers here…the beloved children’s TV show host, as played by everyone’s favorite (or at least mine) human being, Tom Hanks. But this film isn’t a star turn biopic for Hanks or Rogers, but for Mr. Rogers’s way of being, seeing and sharing.

I didn’t grow up watching this show…I was raised on “Captain Kangaroo,” “Howdy Doody” and Nancy Claster’s magic mirror in “Romper Room.” There were lessons to be had for sure from these Saturday morning treats, but probably not as penetrating as those that ordained minister and educational psychologist Fred Rogers brought to his audience.

“A Beautiful Day in the Neighborhood” is based on the true story of a real-life friendship between Fred Rogers (Hanks) and journalist Tom Junod. The character of Lloyd Vogel (Welsh actor Matthew Rhys) is loosely based on Junod.

Cynical and ambitious, Vogel is given an assignment by his editor Ellen, the always amazingly fierce and funny Christine Lahti, to do a story on Rogers. Apparently, Vogel’s toughness has scared a lot of other subjects, and Rogers is the only one who has agreed to being interviewed by him.

With much enthusiasm from his wife Andrea, (Susan Kelechi Watson), who loved the show growing up, Vogel takes on the job, black heart in hand.

This is the kind of film that could make itself cry with so many opportunities for grand pathos. But the director, Marielle Heller (“Can You Ever Forgive Me?”) avoids these pitfalls by giving us a real look into modern family life, replete with dirty diapers, difficult in-laws, unsorted childhoods, and adult obligations that must be fulfilled. Chris Cooper, as Rhys’s less-than-ideal father, has a lot to repent for. But he, like all the characters, is not just one-sided; he, too, is a victim of life’s mishaps.

Watching Hanks work with puppets and songs is delightful. But it is the moments when Rhys faces off with Hanks that are exquisite in terms of pacing and tenderness. Hanks takes an inordinate amount of time to express thoughts, giving the impatient journalist with anger-control issues more time to process the ideas that Mr. Rogers is subtly swinging his way. After all, Rogers studied education for children. His approach to Vogel is thoughtful, nonjudgmental and ultimately inspiring.

Rhys, who is a fine actor, really shines in this film, giving us a chance to see a worldly man bravely showing vulnerability and neediness and finding depths of compassion for others along the way.

All the acting is honest and believable. Though Watson as Vogel’s wife, feels a little stiff, but comes off better when appearing in a fantasy scene in Mr. Rogers’s playroom.

At the screening I attended, Mr. Rogers’s still-living wife, Joanne, spoke directly to the audience about the importance of kindness, most especially in these very trying times. Mr. Rogers’s world, his puppets, thoughts…his entire neighborhood…pulsed with the sort of compassion we truly need, for this season and all others.

The writers are Noah Harpster and Micah Fitzerman-Blue. The film opens nationally Nov. 22. Until then, you can watch Fred Rogers at the 1969 U.S. Senate hearing where he defends his show for continued funding.