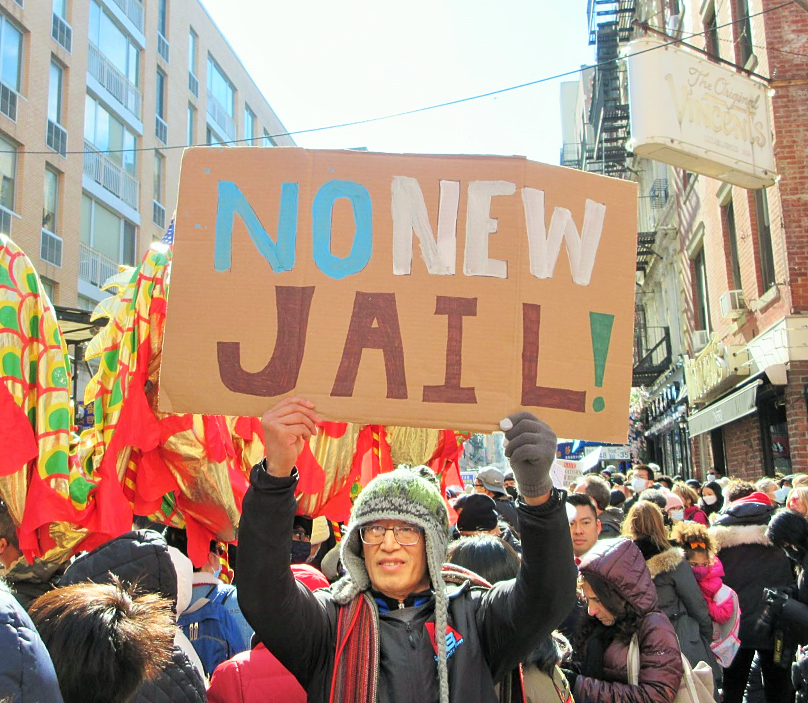 A protester at the Chinatown Lunar New Year Parade. (Photo by Dashiell Allen)

BY DASHIELL ALLEN | Megajail protesters mixed with dragon dancers as thousands of New Yorkers filled the streets of Chinatown Sunday afternoon to celebrate the start of the Year of the Tiger.

Starting at Mott and Hester Streets, local politicians, community groups and dragon dancers made their way through the neighborhood’s narrow streets before dispersing into Sara Roosevelt Park.

For some, the parade was the perfect opportunity to show their adamant opposition to the city’s plan to build a new jail in Chinatown — and, in some cases, to a proposed homeless shelter on East Broadway.

Chi Loek, a board member of the charitable nonprofit UA3, stood in front of a stage filled with elected officials — including Mayor Adams and Governor Hochul — with a sign reading, in big letters, “No New Jail.”

“I’m against the jail because we can put $8.3 billion to better use,” he told The Village Sun, “to support the economic development of Chinatown, to support the health and well-being of all communities. We can put the money into mental health services. After 9/11, Chinatown has been on the downhill, so we really need all elected officials to stop the jail.”

Loek’s colleague William added, “We’ve got to learn to love one another during this crazy economic time. You can build a jail anywhere, but it’s better to help people with mental illness, so you have less hatred like violent crime. We have to go backward and dig deep and build our foundation together.”

He pointed to UA3’s work handing out COVID-19 PPE and distributing food as examples of community-building.

In their remarks, both Adams and Hochul tried to convey an uplifting message of unity.

“What’s great about New York is that we have 8.8 million people and 30 million opinions and that’s what makes New York City an amazing place,” said Adams, amid audible heckling.

“We saw the anti-Asian violence,” he said. “We saw how many people were impacted by a lack of support. But we’re coming back and pushing for this community in a real way. That’s why it’s important to be united as one city.”

“I walked these streets and this was a ghost town for too long — but we are back,” Hochul said, pledging to invest $10 million into social services for the community.

Jennifer Tran, one of the protesters, is the mother of three children who attend P.S. 124, Young Wang School on Division Street, four blocks away from the Manhattan Detention Complex.

She held up a sign reading, “No Mega Jail by Our School.”

Parade-friendly activist Marni Halasa, who lives near Hudson Yards and ran in last year’s Council District 3 Democratic primary, participated in the event in one of her typically colorful costumes. She said she was heartened to see the protesters.

“What I really was inspired was seeing this parade — always well-attended, colorful and joyous — become a venue for political protest,” she said. “And I think this is happening because this community has been hit so hard from Asian hate crimes, the pandemic, the gentrification of Chinatown that prices Chinese New Yorkers out of their neighborhoods and the refusal of local government to implement real reform. They are simply fed up.”