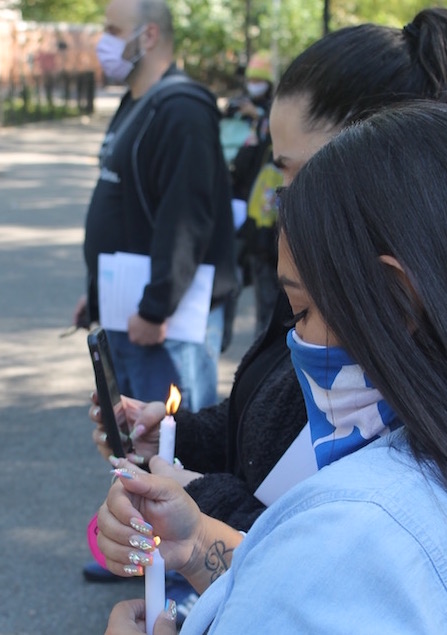 Lilah Mejia, of Why Not Care, front, and Naomi Pena, president of Community Education Council District 1, held candles at a COVID remembrance in Tompkins Square Park on Sunday. (Photo by The Village Sun)

At COVID remembrance, a moment of silence, plus moments slamming Trump

BY THE VILLAGE SUN | More than six months after the start of the pandemic, East Villagers and Lower East Siders gathered for a COVID-19 remembrance ceremony in Tompkins Square Park on Sunday. Part of a national remembrance, the event include a moment of silence at noon.

The solemn occasion started with Melissa Tong playing a Bach violin sonata in G minor. She was then joined by Larry Saltzman on guitar in performing the mournful “Ashokan Farewell,” by Jay Ungar, which was the theme song of Ken Burns’s acclaimed “The Civil War” documentary.

Speakers included District Leader John Blasco, who noted of the pandemic, “I’ve lost residents of the community because of it. I’ve had friends lose jobs because of it and their livelihoods.”

He added that Daisy Paéz, a female district leader from the Lower East Side, had battled through coronavirus.

“The Trump administration has done nothing but amplify this virus,” Blasco accused. “If you wear a mask it doesn’t matter — you can just drink bleach.”

Feliciano, who is a public health organizer, also noted that he’s a “history buff” in explaining why he picked the park’s Temperance Fountain for the site of the gathering. The fountain was erected in 1877 as part of a “moderation movement” to deal with another health crisis, alcoholism, he said. The idea was to encourage people to drink fresh water instead of booze.

“We have to take care of each other,” he said. “Government abandoned us.”

“I saw the AIDS crisis,” she said, “I’ve seen tuberculosis, I’ve seen ebola and the list can go on and on and on.”

As for Trump, she said, “The 45th president got COVID. I won’t say it was poetic justice. We don’t want anybody to be sick. Do you think he’s actually going to learn from this?” she asked, as some in the crowd said, “No.”

Congressmember Carolyn Maloney noted she has introduced a bill to assist frontline workers during the pandemic, including healthcare workers and grocery store workers. She urged everyone to vote on Nov. 3.

Assemblymember Harvey Epstein, who could not attend because he was celebrating his mother’s 80th birthday, spoke to the crowd via a cell phone on speaker mode.

“COVID has really brought out the best and worst in us,” he said. “Even though we are attacked by the worst pandemic in 100 years, there is so much we can do.”

A statement was also ready by Councilmember Carlina Rivera, who was also unable to attend.

Luke Wolf gave remarks on behalf of Comptroller Scott Stringer, whose mother, he noted, died due to coronavirus.

Kevin Collins, executive director of the Doctors Council of SEIU, reiterated what needs to be done to fight the potentially deadly disease.