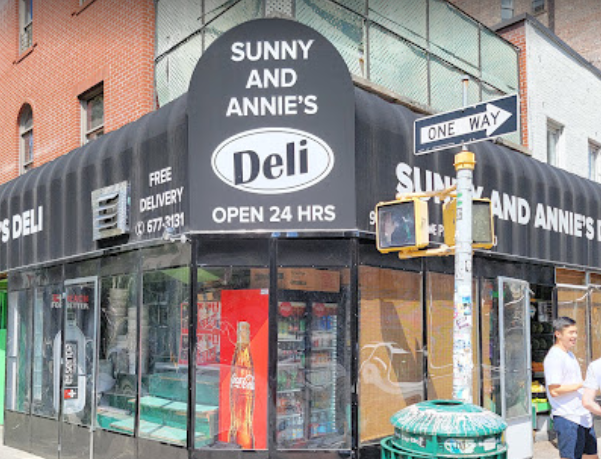 An employee at Sunny and Annie's Deli was reportedly roughed up after telling a man to mask up. (Google Street View)

BY LINCOLN ANDERSON | A young Asian woman working in an East Village deli was punched in the face last week after telling a man — who turned out to be a shoplifter — to don a face mask, police said.

According to her husband, the woman, who has not returned to work yet, is “very traumatized” by the assault.

Police said that on Thurs., March 3, around 8:40 p.m., an uknown man entered Sunny and Annie’s Deli, at 94 Avenue B, at Sixth Street. The victim told him he had to wear a face mask inside the store, but he refused. The guy eventually tried to flee with four bags of Doritos. The worker tried to get the chips back but he hit her in the face, police said.

The woman, who is 30, was not taken to a hospital for treatment.

Asked if the incident was being treated as a hate crime, a police spokesperson said it’s still under investigation. Asked how many times the victim was punched, he just said she was punched and didn’t specify further.

In terms of the suspect’s description, police did not provide many specifics, only saying he is a male Black in his 30s.

Initially, a police spokesperson said he would send a “statement” about the incident, but The Village Sun never received one. The reporter subsequently called back and received the details of the incident but no statement per se.

In a phone interview Monday night, the woman’s husband, Terrence, provided more details about what transpired. He clarified, however, that he was not there when it happened.

He spoke in between ringing up customers’ purchases at the cash register. He was filling in for his wife on what would normally have been her shift.

“She had asked him to put on a mask,” he said. “He started cursing, saying slurs. … The first thing he did was start cursing and spitting.”

He said the man stole some beer first. He then swiped the chips, which are in an enclosed area outside the store, on his way out. That’s when his wife intervened, and, Terrence said, “The guy started swinging at her.”

Asked how many times she was hit, he said he didn’t know.

Asked if he personally thought it was a hate crime, Terrence said, “I can’t say if it’s anything like that. I think the dude was just short on some marbles.”

On the other hand, though, he noted that the guy did spew slurs. Asked what specifically the man had uttered, Terrence said his wife didn’t tell him.

“She was just crying,” he said.

He said police took the store’s surveillance videotape as part of the investigation.

“She’s O.K.,” he said of his spouse, though adding, “She doesn’t want to come back. She’s very traumatized. … We’ll give her a few weeks.”

Asked about the extent of her injuries, he said, “She’s got some bruises on her face.”

One longtime neighbor, who requested anonymity, said she was coming home from a restaurant that night around 9:15 and saw three police cars outside the deli with their lights flashing.

The version of the story she had heard was a bit different. She said she heard the man had knocked over the rack of chips and that the worker went to pick them up, but that the suspect was waiting for her and punched her — not once but “a few times.”

The deli is a 20-year-old, family-owned business. The resident said the couple that own it are Korean and have two daughters who were often in the store as kids and now work there.

“I mean, I watched this girl grow up,” the neighbor said.

The store stayed open throughout the pandemic and never had any problems involving face masks, she noted.

“People without masks would wait outside and pay by Venmo,” she said. “They had a little microphone and would give people numbers and call their number and leave them their orders. It was contactless.”

The neighbor requested anonymity because, she said, she is concerned for her safety since the suspect has not been caught.

The Daily News just ran an article about another Avenue B deli, Sheen Brothers Deli, at 157 Aveneue B, at 10th Street, that is reportedly being terrorized by “rowdy teens” who come in and sometimes hit the workers with sticks and umbrellas and hurl cans at their heads.

“This stuff hasn’t happened in this neighborhood since the early ’90s,” the neighbor said. “It makes me nervous to go outside.”

The concerned resident gave a quick recap of the history of the Sunny and Annie’s Deli corner.

“It was a video store with a coke and dope operation back in the ’80s — like everywhere around here back then,” she said. “Before that it was Pat Hearn’s art gallery. After the video store, it was empty for a while. Then it was another deli. The new owners kept the name Sunny and Annie’s, though their names are ‘Betty and Mr. Yom,’ that’s what everyone calls them,” the neighbor said.

Nowadays, some apartments in her building rent for $5,000 a month. At the same time, though, she said, “Some people don’t have much money in the neighborhood.”

“Watching this neighborhood change,” she reflected, “and now it’s sliding back.”

As for face masks, as of Mon., March 7, they are no longer mandated in most indoor spaces in New York City, but individual businesses can still require customers to wear them.