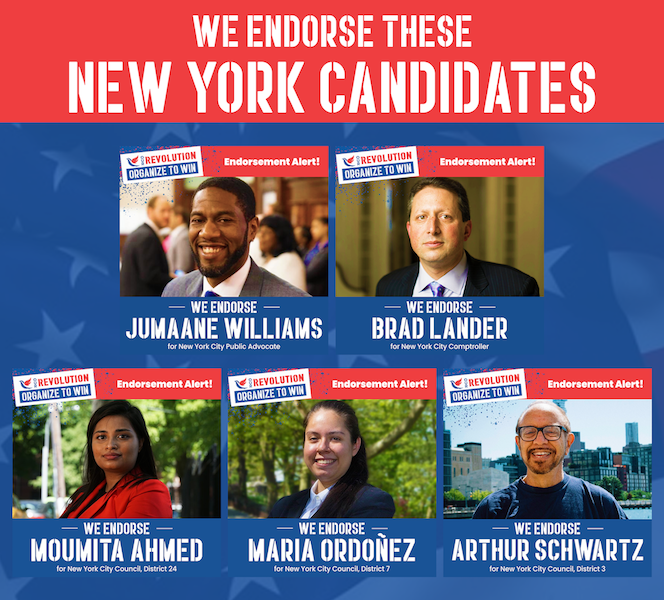 Arthur Schwartz is in the first round of endorsements for the 2021 New York City elections by Our Revolution, a national group continuing the Bernie Sanders movement.

BY THE VILLAGE SUN | Arthur Schwartz’s City Council campaign has gotten a big mittened thumbs up from a national organization created by Bernie Sanders.

The group, Our Revolution, has endorsed the Village Democratic district leader in District 3, along with four other “progressive champions.”

Sanders created the group after the 2016 Democratic National Convention in Philadelphia.

Ahmed, cofounder of Millennials for Bernie, is running in a special election on Feb. 2. The other candidates will be on the ballot in the June 22 primary election.

Schwartz and Ordonez are both “dedicated activists and supporters of Our Revolution who will be powerful voices in the new City Council,” the group said in its endorsement.

Williams is two-time Bernie delegate to the D.N.C. and, according to Our Revolution, “an activist and a rare elected official who led Black Lives Matter protests last summer.”

Our Revolution noted that Lander “successfully pushed legislation to protect freelancers and fast-food workers, to expand affordable housing and to end stop-and-frisk.”

“Together, these candidates will tackle the issues that are holding too many New Yorkers back — racism, inequality, lack of quality healthcare, housing, public education and so much more,” the Berners organization said.

“We have an unprecedented opportunity to build progressive power and reshape the political landscape in New York this year,” Our Revolution said. “Term limits have created open seats this year for the mayor, the comptroller, four of the five borough presidents and over two-thirds of the City Council seats, and all of these races will be determined for the first time using ranked-choice voting — which means that our people-powered campaigns are perfectly positioned to make the difference.”

“In 2016 Bernie Sanders launched a national organization out of his campaign, to continue the movement that was built around his campaign,” Schwartz said. “Since then it has grown into a national force backing candidates running for office from coast to coast who it believes are committed to fighting for progressive priorities, like the proposals for a Green New Deal, Medicare for All and criminal-justice reform.

“Here in New York, before an online audience of over 2,000 people, I was part of a group of its first five endorsements in New York in 2021, along with Public Advocate Jumaane Williams and City Councilmember Brad Lander, a leading candidate for city comptroller and founder of the City Council Progressive Caucus.

“Being part of this group is humbling,” Schwartz said. “It is an endorsement, like my endorsement by Black Lives Matter, based on my 52 years of activism, and my work over the last five years organizing around the issues which have moved the Democratic Party in a far more progressive direction.

“Just like Bernie is a loud voice who fears no one, my candidacy is built around the same model. I want to be Organizer in Chief for our Council District, and I want to be a voice in City Hall which no one will ignore.”