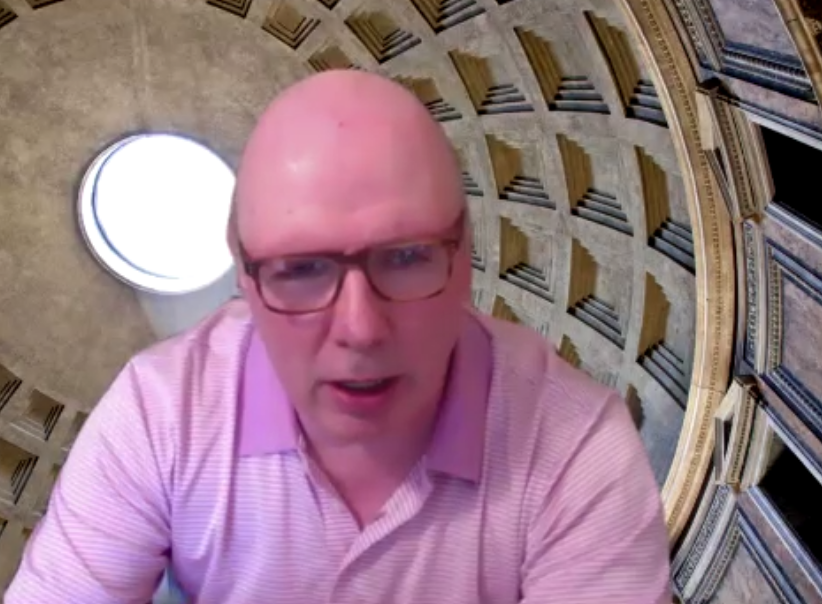 The oracle? C.B. 2 member Cormac Flynn warned that takeout alcohol appears to be a "pilot project" now but — who knows? — maybe could become permanent. (Photo by The Village Sun)

Another round of discussion at C.B. 2 on takeout alcohol

BY LINCOLN ANDERSON | Community Board 2 has been considering tracing. Not for coronavirus — for cups of takeout alcohol.

That was just one of the ideas broached earlier this month at a meeting of the C.B. 2 State Liquor Authority Licensing Committee as the Lower West Side board grapples with how to control crowding outside bars during the ongoing COVID pandemic.

Currently, Governor Cuomo is doing monthly renewals of his executive order that allows bars and restaurants to sell alcohol both for takeout and delivery.

Meanwhile, State Senator Brad Hoylman has a pending bill that would legalize takeout and delivery alcohol for two years, which would free Cuomo from having to constantly renew his order — and which the hospitality industry strongly supports.

Hoylman’s bill has been the departure point for vigorous discussions at C.B. 2 over the past two months — specifically the part of it on takeout beverages.

In June, the board was deadlocked over the idea of whether to recommend nixing takeout alcohol altogether and just allowing delivery booze. The members decided to “table” the matter for further discussion in July.

Earlier in June, Cuomo and Hoylman, along with community boards and local residents, had been shocked to see droves of young bargoers — neither wearing face masks nor social distancing — packing St. Mark’s Place in the East Village and Hudson St. and Seventh Ave. South in Greenwich Village.

At that time, an angry Hoylman warned that — if bars didn’t get their act together — he might modify his bill to allow only alcohol for delivery and not takeout, might only apply his bill to areas outside New York City, or might just pull the bill entirely.

Also at that time, the state senator called for bars to enforce the open-container law — meaning no drinking on the street — and said takeout alcohol means just that: take it away and don’t congregate around bars drinking it.

Kendall Jacobsen, Hoylman’s legislative director, told the C.B. 2 S.L.A. Licensing Committee meeting on July 9 that takeout and delivery alcohol are vital for bar and restaurant owners right now, when customers are still not even being allowed back inside these businesses yet.

“This is the only thing keeping them afloat right now,” he said. “The senator’s main goal was to help these people stay alive. Bars and restaurants really have made the case that this is a crucial lifeline to them.”

Yet Carter Booth, the C.B. 2 chairperson, along with other board members, told Jacobsen that the board has only received “negative feedback” about the to-go part of the bill.

The idea is the legislation would go into effect after the current state of emergency is lifted and last for two years, though Jacobsen noted, “We’re considering shortening that amount of time.”

There is another pending bill, however, that would make takeout alcohol permanently legal in New York, as was recently done in Iowa.

However, many local residents’ frustration with liquor-licensed premises precedes the pandemic. A good portion of the meeting was taken up by residents venting against what could be called “Takeout Alcohol Gone Wild.”

As Soho dweller Lora Tenenbaum told the meeting, “Our community is overwhelmed — and has been way too overwhelmed by liquor licenses already.”

Another issue is there doesn’t seem to be any clear sense of exactly who is supposed to provide enforcement on takeout alcohol. Politicians don’t want police, for one, to get involved with the situation.

Noho activist Zella Jones said, “We all know that the S.L.A. doesn’t have enough personnel for enforcement. There isn’t going to be any enforcement.”

Villager Augustine Hope said it seems to be a case of all or nothing. Just that day, the S.L.A. had summarily suspended the liquor license of The White Horse Tavern, on Hudson St., after the historic bar continually flouted health-safety regulations. Despite warnings from police and inspectors, the White Horse had repeatedly allowed sidewalk “street parties,” and even set up an illegal bar on the pavement.

“There’s the nuclear option — what happened to The White Horse today,” Hope noted. “Anyone who doesn’t reach the level of The White Horse, nothing happens — and it never happens.”

Meanwhile, according to residents, police are telling them they have been instructed not to enforce “quality-of-life issues” — which is what they consider open-container laws and wearing face masks to be.

Resident Kathryn Quinn echoed the talking point that no residents support the idea of to-go booze — and she further implied that the bar and restaurant operators are “outsiders,” not actually living in the district.

“I think we have established that virtually every resident of Senator Hoylman’s district is against this,” she declared.

“I would dispute that,” Jacobsen responded. “It is not unanimous opposition that we have seen.”

“They’re not voters,” Quinn shot back, implying the operators are not district residents.

Meanwhile, Cuomo has ordered that operators must control the area extending 100 feet from their their businesses, and Jacobsen said Hoylman is thinking of adding that to his bill.

Nancy Pasley argued there should be no need for takeout alcohol after the health crisis ends.

However, Jacobsen said, “We anticipate a lot of people will not be comfortable in indoor spaces until there is a vaccine.”

After the public was done venting their opposition to takeout alcohol, the talk turned to specifics on how to improve the situation, and C.B. 2 members started brainstorming.

Cup tracing — to show where the drinks come from — was just one idea for controlling crowds outside bars.

As for others, Jacobsen, from Hoylman’s office, noted they were considering “the banning of straws” with the drinks.

Another thought was for “sealed” drinks.

“Our goal is to have the kind of vessel where it would be evident that someone broke the seal,” Jacobsen explained.

“How about a foil or foam plastic seal with a sign, ‘For Home Consumption — Violators Will Be Prosecuted?'” added C.B. 2 member Mar Fitzgerald.

“I’ve only seen that on bubble tea in Chinatown,” Booth noted, clearly referring to the seals — not the warning label.

Fellow board member Cormac Flynn proposed color-coded cups clearly indicating which drinks are alcoholic. He noted the board had recently stipulated that idea for the Regal Union Square movie theater, at 13th St. and Broadway, as a condition for approving alcohol there.

If people don’t want police getting involved in terms of enforcement, how about using auxiliary cops? suggested Susan Kent.

“They represent some kind of authority,” she offered, “even though they can’t issue summonses.”

Board members also discussed the vague regulations requiring food to be purchased with to-go alcohol. Bob Ely, the committee’s chairperson, noted that, “‘Food’ can be a bag of peanuts. The meal should be 50 percent of the cost,” he asserted.

However, Booth shot that idea down, noting that one high-end cocktail in the Village, Soho or Meatpacking District can cost $20.

Flynn cautioned that the current situation could become permanent. While takeout alcohol, he said, is like “a pilot project, experimental, we may not have the mojo to put the genie back in the bottle.”

“Restaurants are turning into bars to survive,” added Susan Wittenberg.

Chairperson Booth, however, said most operators are being responsible and that only “a handful” are ruining it.

He added that since Hoylman himself was a former chairperson of C.B. 2, it’s “not fair” to the state senator for the community board to pass a resolution on this issue “by just one vote”; rather it should be a solid show of support.

However, Shirley Smith objected to that idea, stating, “I don’t think it’s our obligation because Brad was on our board and is our neighbor. This isn’t the only district being affected.”

Ely clarified that rather than a formal resolution, what the board is being asked to do is provide feedback on the contentious issue.

As the virtual meeting on Zoom wound down, Booth shared a photo that someone had just sent him, showing a crowd jamming the sidewalk outside a West Village bar.

“This is right now,” he said as the photo displayed on everyone’s screens. “No one in this community is going to support this if it keeps up.”

Jacobsen responded that’s exactly why Hoylman warned he would strike takeout alcohol from his bill, if necessary.

“That crowd you just showed is a danger to us all,” he said.

The full board of C.B. 2 will meet on Thurs., July 23, at 6:30 p.m., during which it is expected to weigh in on the issue of takeout alcohol and Senator Hoylman’s bill.