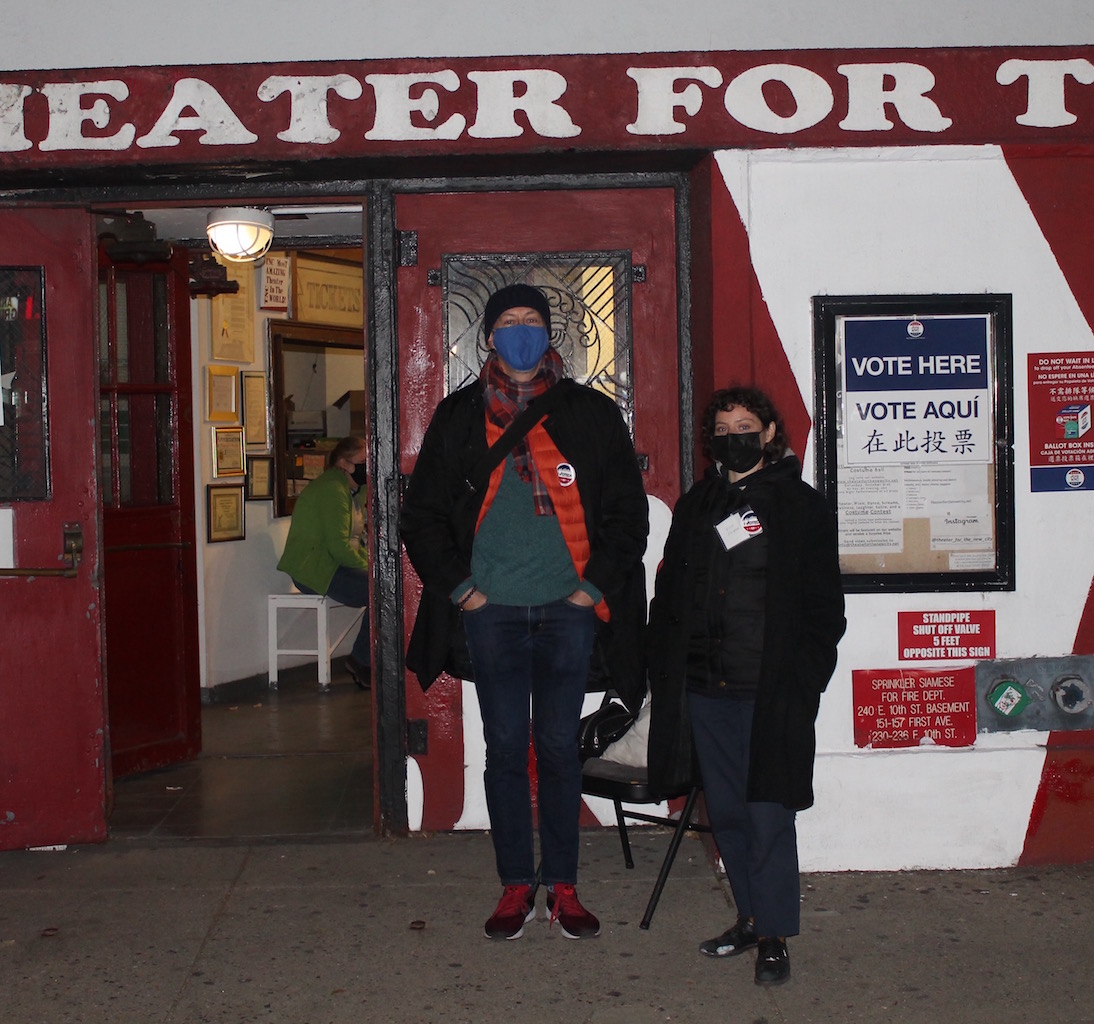 Paul Chernosky, from Middle Collegiate Church, and poll worker Essye Klempner at the Theater for the New City poll site on Election Day. (Photo by The Village Sun)

An early surge, then a slow day at Downtown polls, but lots of tension

BY THE VILLAGE SUN | Election Day in Downtown Manhattan started out with very long, socially distanced lines when the polls opened. But after that initial surge, the number of voters slowed down to a trickle.

The light turnout during most of the day was clearly due to all the early voting and voting by mail that had already occurred.

It was so slow that a handful of poll workers at P.S. 41, at W. 11th St. and Sixth Ave., were hanging out on chairs in front of the poll site on Tuesday around 8 p.m. They said the voters had started lining up at 5:30 a.m., a half hour before the polls opened, and that the line stretched down to Sixth Ave. and then nearly two blocks Downtown.

One of the poll workers, Micah Latter, said Village actor icons Sarah Jessica Parker and Matthew Broderick had come by around 9 a.m. to vote with their son, James, who was casting a ballot for the first time.

Latter said she let one elderly woman who was back at the end of the line come up to the front. The senior was gripping her voting card tightly in her hand.

The story was the same in the East Village at the poll site at Theater for the New City, on First Ave. between 10th and Ninth Sts. Poll workers said there had been a big line around 6:30 a.m., but after that it was very light.

East Village activist David Leslie was biking around checking conditions at the neighborhood’s poll sites. He and a group of others had been planning to help out in any way they could, by providing chairs for voters waiting on long lines or holding people’s place in line if they needed to go the bathroom. But, as he soon found out, their services weren’t needed — it was “all quiet on the Eastern front,” so to speak.

Similarly, Paul Chernosky, a member of Middle Collegiate Church, said he had come to Theater for the New City to help make sure voters were “comfortable,” and had handed out granola bars earlier. But, again, there wasn’t a lot of help to provide with the sparse turnout.

Meanwhile, some stores — like the Kmart on E. Eighth St. — were boarding up their windows with protective plywood Tuesday evening. Others had already done it in the days before.

Amid the sound of whirring drills and pounding hammers, a guy with the crew covering up the Kmart said he didn’t know how long the plywood would stay up.

“It depends,” he said, declining to give his name. “If there’s civil unrest, it’ll stay up for a week. … Last time they broke every window, every window,” he said, recalling the vandalism and looting in early June at the start of the George Floyd protests.

He was posting “We Are Open” signs on the boarding. Other stores were doing the same.

“With the wood up, no one knows that we’re open,” he explained.

The Verizon phone store catty-corner to P.S. 41 on the other side of Sixth Ave. was also boarded up. Inside, Daniel C., the manager, said all the display phones had been taken off the shelves and put in a safe as a precaution. The place was cleaned out in June, he said.

However, some time before 9 p.m., a bicycle police officer on 14th St. between Fifth and Sixth Aves. shrugged nonchalantly that things were quiet. He was part of a large detail of two dozen or more bike cops who blended into the shadows on the north side of the block. They were all outfitted in black body armor, resembling a cross between ninjas and the black-suited Spider-Man.

Asked what the name of their unit was, the officer cooly said, “Disorderly Control.”

Asked if they were a new unit, he said, “We’ve been around.”

Maybe things were so quiet because everyone was glued to their screens, watching the news reports rolling in on what has turned out to be a neck-and-neck race for the presidency.