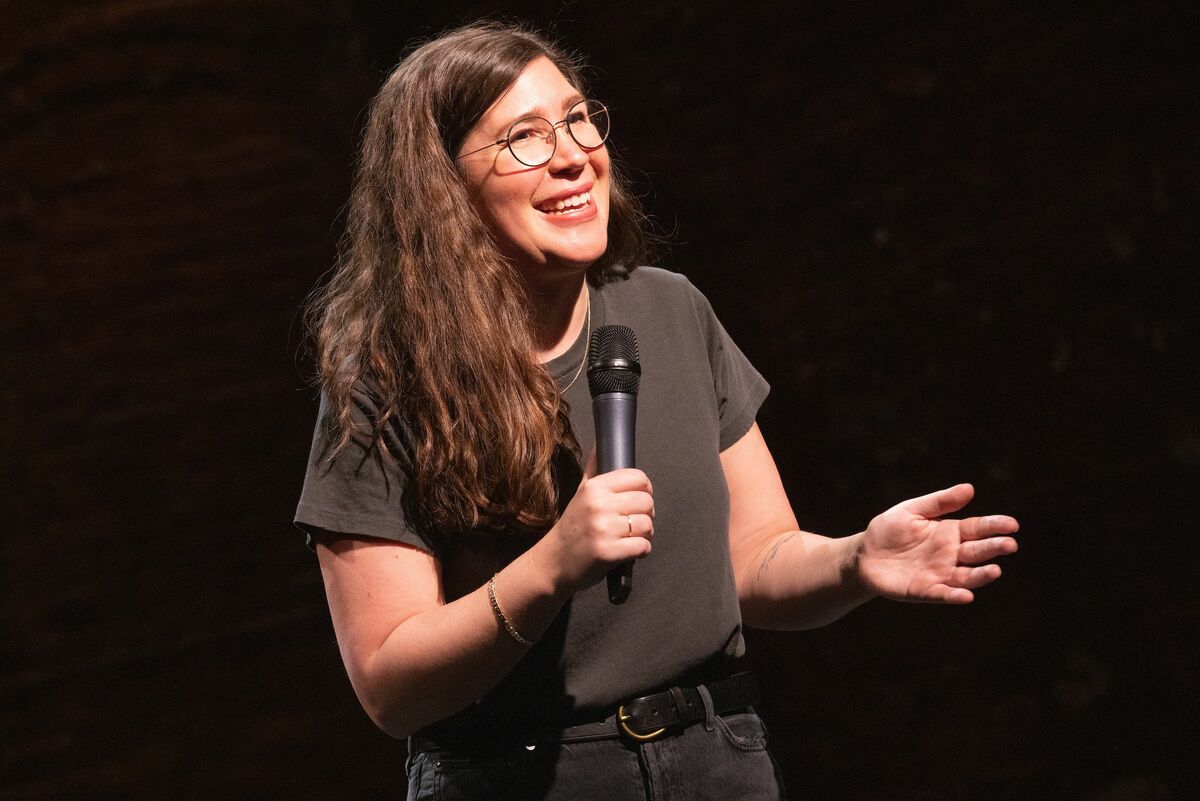 BY BETSY KIM | Alison Leiby’s one-woman performance “Oh God, a Show About Abortion” feels like a funny, breezy visit with that close friend of yours who always makes you laugh. For example, she recounted, “My mom said, ‘The best time in your life is when you are married and don’t have any kids!’ [pause] I’m an only child.”

Comedians routinely expose themselves to judgment measured by audience laughter or stony silence. With the warm reception at the Cherry Lane Theatre in the West Village, it’s easy to overlook Leiby’s gutsy bravery in putting herself on the line with an honest normalization of abortion.

The leaked draft of the Dobbs v. Jackson Women’s Health Organization opinion showed the U.S. Supreme Court poised to overturn Roe v. Wade. Leiby’s monologue is a refusal to be shamed into silence for exercising a personal decision, protected by the 14th Amendment’s due process clause, which prevents state governments from infringing on the right to privacy.

During the height of the AIDS crisis, ACT UP used the “Silence = Death” motto to force conversations and action about a tabooed topic. Using clever punchlines, Leiby’s work pushes into the public sphere discussions about a medical procedure that one out of four women in the U.S. will have by the age of 45, according to the Guttmacher Institute.

Leiby shares an anecdote of a frightening illegal abortion, predating Roe v. Wade. It involved blindfolding the patient and driving her around in New Jersey, maybe in circles, so she could never identify the location where the abortion occurred.

As someone who co-produced “The Marvelous Mrs. Maisel” and Comedy Central shows, Leiby deftly builds a lighthearted, yet meaningful and suspenseful storyline.

She explores gender and sexuality, while traveling through adventures and making observations in a somewhat stressful first world. Starting with trying not to lose Barbie’s pointy, white TicTac shoes, Leiby gives the doll credit for having 40 careers and a Corvette. She remarks that someone has to pay for the Malibu Dream Home “because Ken is only a lifeguard.”

Her slice-of-life then romps through sex education in a public school, then dating. She asks what’s the worst thing you can find in the home of any one-night stand? She screams, “It was 30 caged birds in the kitchen! What kind of nightmare do you live in, bro???”

She comments that they “weren’t even good birds,” like colorful talking parrots. Instead they just were like the birds that live in J.F.K. Airport.

She asks the guy, “What the f— is with all these birds?”

Leiby then advises, “You have to be careful out there when you have sex.”

Her scenarios include “nightmarisizing” (the opposite of fantasizing) a marriage triggered by an unplanned pregnancy, and setting up a home.

While on tour, the comedian learns of her unwanted pregnancy, taking a CVS-purchased home pregnancy test in a hotel in St. Louis, Missouri. She hits serious notes of how fraught making a choice of motherhood already is for women. When women are young, they often feel terrified of getting pregnant. As they get older, they worry about never getting pregnant. In the middle there’s a window where “anything is possible” — provided a woman has the financial resources, right partner, job, home and insurance. But Leiby notes the choice about motherhood seems to define you. This silently raises the pregnant, rhetorical question: So, whose choice should that be?

She describes her uneventful abortion at Planned Parenthood in Soho. But she noticed a luxury maternity store across the street, asking with some horror: “Who owns that? Mike Pence? Why is that there?”

A couple of questions at the appointment were a bit more vexing. The medical practitioner asked if she wanted to know if there was a fetal heartbeat. Leiby suggested an alternative of faxing that answer to Mitch McConnell, who seems to care a great deal for someone not personally involved in the situation.

The second question of whether she wanted to know if there were twins made her wonder: “Who is this question for?”

Following the June 1 performance, Elizabeth Rothman, a representative of one of the play’s producers, Bad Robot Productions, moderated a talk with Nancy Northup, president and C.E.O. of the Center for Reproductive Rights. The center represents the Jackson Women’s Health Organization in the Dobbs case.

The lawyer described how politics has swallowed a healthcare issue. She recalled in 1976, Jimmy Carter, the Democratic nominee for president, opposed abortion, while Gerald Ford, the Republican nominee, was pro-choice. The 1973 Supreme Court opinion in Roe v. Wade, decided 7 to 2, was not politically driven.

Northup reviewed how Oklahoma recently banned abortions beginning at fertilization. Texas banned abortions after six weeks, with enforcement by vigilantes who can collect $10,000 by suing anyone who aids and abets an abortion provider. She further noted Missouri has a bill to criminalize assisting people in crossing state lines to get an abortion.

The U.S. is going against the global trend of liberalizing abortions, according to Northup.

“The only other countries that are going backwards like us are where authoritarianism is on the rise, like Poland, where separation of the executive and judiciary has been crumbling,” she stated.

“We want to live in a democracy that treats everybody with dignity and respect,” Northup said. “We need to stand up for our values and make that loud and clear.”

For the center, this means people protesting when the Dobbs decision becomes law. She recommended using liberateabortion.org as a resource to mobilize; donating to abortion funds that help women travel to access abortions; supporting legal-rights organizations; and rallying behind the Women’s Health Protection Act in Congress.

Northup also emphasized the importance of conversations about abortions. Similar to Leiby, both Northup and Rothman learned that, years ago, women with whom they were close had dangerous, shady abortions.

Leiby’s abortion was an anticlimactic, safe denouement. She compared the experience to walking out of a Nordstrom Rack, feeling mostly satisfied, a little underwhelmed. In her case, she felt a quiet relief.

But the choice was Leiby’s to make — as was defining her life and identity.

“And that question in the back of my mind was answered: I’m a woman who is not a mother,” she said.

Legitimate reasons, religious or otherwise, exist for women to personally choose not to have an abortion. But by normalizing abortion, Leiby voices the right of all women to safely make their own choices, which requires equitable access to sexual and reproductive healthcare.

“Oh God, A Show About Abortion,” running time 70 minutes, the Cherry Lane Theatre, 38 Commerce St., through June 30. Performances recess from June 6 to June 11 but resume June 13, Monday through Saturday at 7 p.m. and Saturday at 3 p.m.