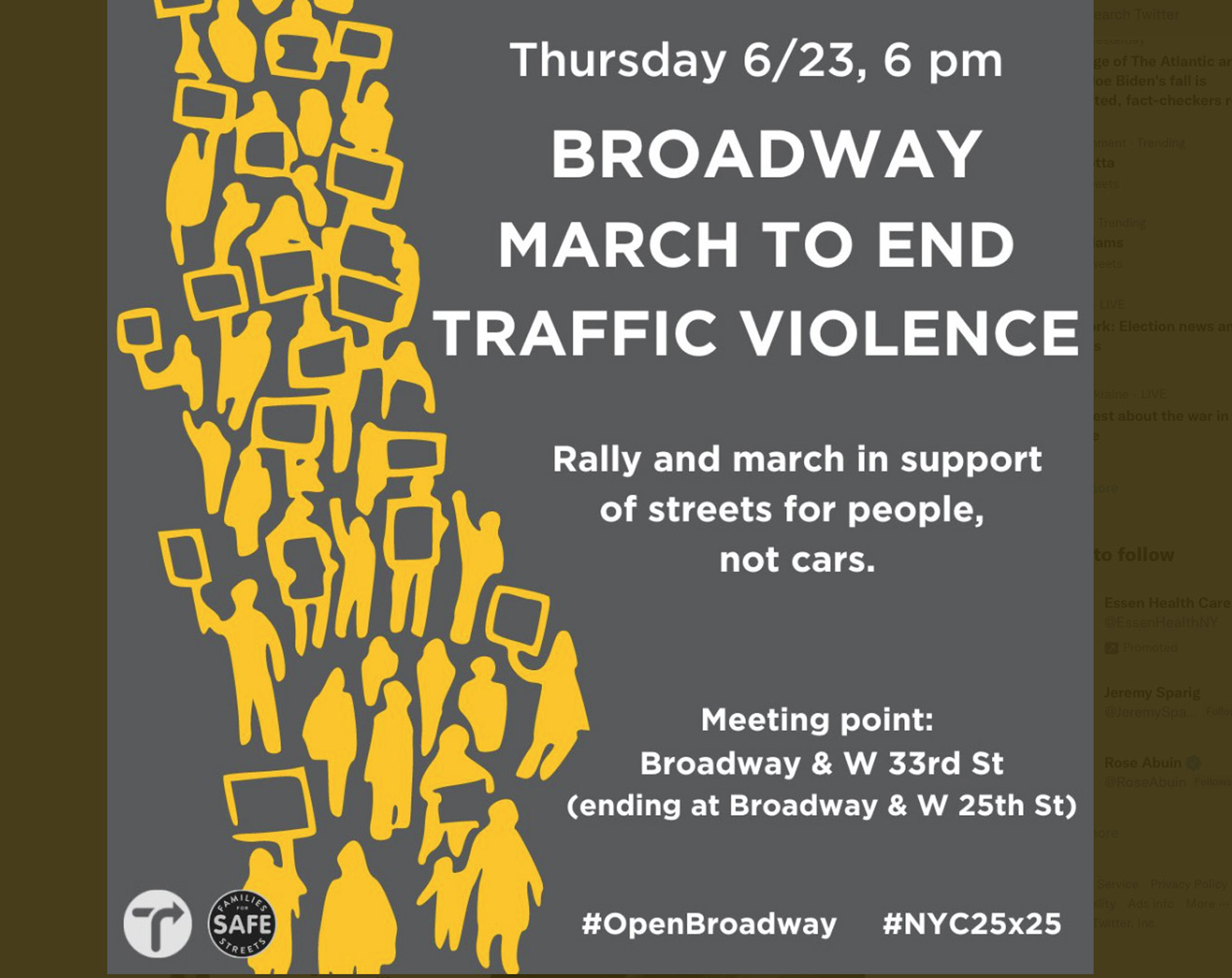 BY THE VILLAGE SUN | Like some plays, cars should be off Broadway, Transportation Alternatives and others argue.

Their cries will reach new levels this Thursday evening at 6 p.m., when activists will hold a “Broadway March to End Traffic Violence” to rally “in support of streets for people not cars.”

On Monday, in a horrific accident in so-called NoMad, just north of Madison Square Park, an out-of-control yellow cab mounted the curb on Broadway between 28th and 29th Streets and slammed into an outdoor cafe. Six people were injured, three critically, with one woman reportedly losing a leg below the knee and another woman also left with a gruesome leg injury. The two women were stuck under the cab, but a group of pedestrians were able to lift the vehicle off of them.

According to police, the hack, 60, was heading westbound and turning onto Broadway at 29th Street when he collided with a cyclist, 50, traveling southbound on Broadway in the bike lane. The cab’s left front corner hit the cyclist in the bike lane, police said. It was apparently a CitiBike.

“The bicyclist was knocked to the roadway, and the taxi then dragged the male a short distance, continuing onto the east sidewalk,” police said, according to the preliminary investigation. “The taxi then continued southbound on the sidewalk striking the three pedestrians, pinning two under the vehicle and coming to a rest in front of 1186 Broadway.”

According to the Daily News, “Paperwork filed by police after the accident says the bicyclist blew a red light, collided with the cab, flew off his bike and was dragged by the taxi. He was severely injured and his arm was mangled, authorities said.”

However, a police spokesperson on Thursday, when asked by The Village Sun who had the green light, only said, “The investigation remains ongoing.”

Transportation Alternatives is pushing a “25×25” campaign to transform 25 percent of the city’s “car space” into “space for people” by 2025, plus supports the idea of a “car-free Broadway.”

“A car-free Broadway would have prevented this heinous crash,” Danny Harris, the organization’s executive director, told the Daily News. “Whether it’s building truly protected bike lanes, cracking down on reckless drivers or building car-free streets, New York City has the tools to keep our streets safe. But when elected leaders hold back these tools or lack the political will to get these done, the consequences on our streets are horrific.”