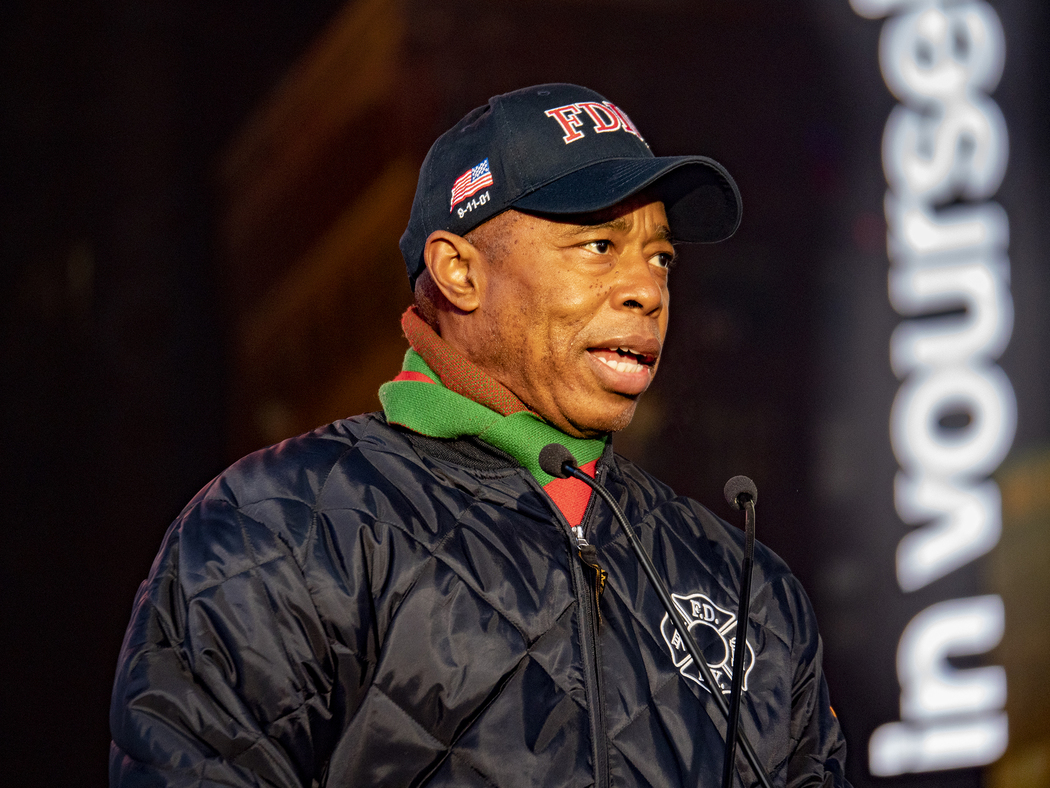 Mayor Eric Adams speaking at the memorial for Michelle Go in Times Square on Jan. 18. (Photo by Milo Hess)

In his Blueprint to End Gun Violence, which he announced Monday, Adams said the number of “adolescent offender” New Yorkers arrested with guns has spiked alarmingly.

“We must…look at ‘Raise the Age’ legislation, which is being used as a loophole for gang members to demand young people under 18 take the fall for guns that are not theirs,” he said. “My administration is not seeking to punish young people — but when it comes to guns, we must make sure there are consequences.

“Far too many men above the age of 18 are victimizing children by forcing them to carry the weapons,” Adams charged. “This is evidenced by the statistics.”

In short, Adams said, “Children are being used as pawns.”

“If a 16- or 17-year-old is arrested on a gun charge, the N.Y.P.D. should ask the individual where they got the gun from,” he said. “If the individual refuses to disclose that information, prosecutors should have the ability to charge the individual in Criminal Court rather than Family Court.”

Legislation in 2018 raised the age of criminality in New York to 18. Previously, New York was one of only two states to prosecute 16- and 17-year-olds as adults.

In addition, the mayor said he’ll soon be deploying new police Neighborhood Safety Teams that will focus on gun violence.

“We will launch these additional teams in the next three weeks, with deep focus on the 30 precincts where 80 percent of violence occurs,” he said.

While Greenwich Village’s Sixth Precinct is fortunately not among those 30 precincts, there was a reported attempted gunpoint robbery in Washington Square Park on Sunday night, which is a very unusual occurrence. According to police, two men in their 20s, one with a firearm, demanded a man’s bag but he ran away and was not injured.

The new year has gotten off to a bloody start in the Big Apple, with five police officers shot, two fatally, and the deadly subway shoving of Michelle Go in Times Square by a mentally ill homeless man, among other violent crime.

“Gun violence is a public health crisis that continues to threaten every corner of our city,” Adams said. “Public safety is my administration’s highest priority, which is why we will remove guns from our streets, protect our communities and create a safe, prosperous and just city for all New Yorkers.”