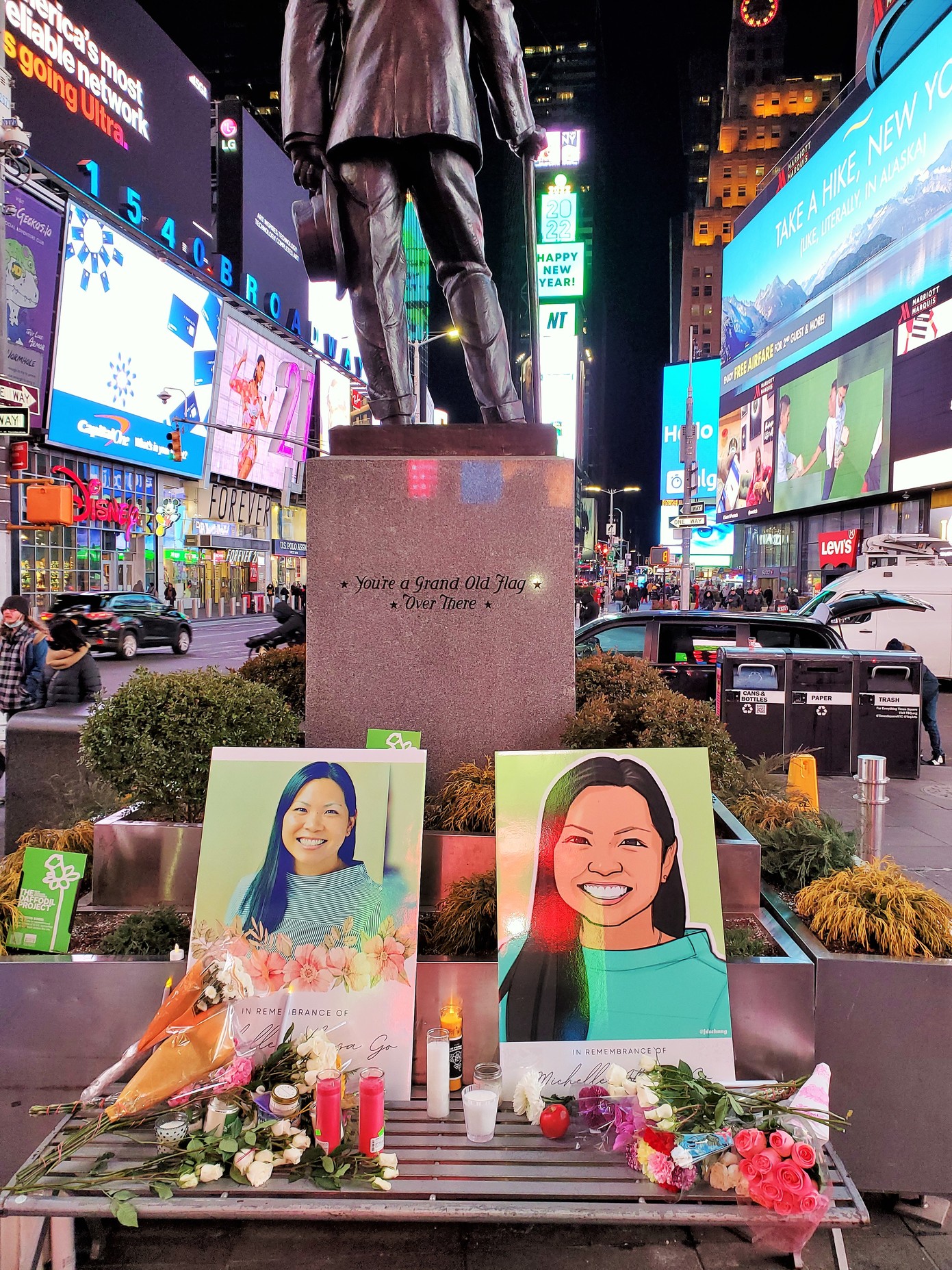 A memorial was left to Michelle Alyssa Go in Times Square. (Photo by The Village Sun)

‘We have a right to be safe’: Activists, politicians say ‘hard problems’ must be tackled after Times Square subway-shove death

BY LINCOLN ANDERSON | Amid two years of unrelenting anti-Asian hatred and violence, Michelle Alyssa Go’s death in Times Square on Saturday has raised the alarm to a new level.

As Congressmember Grace Meng put it at a memorial for Go on Tuesday evening at the Crossroads of the World, many people, but especially Asians, are “terrified” right now.

On Saturday, Simon Martial, 61, a homeless mentally ill man, turned himself in to police shortly after Go’s death. He confessed to pushing her in front of a subway train that was pulling into the 42nd Street station. Asked by a reporter why he did it, he shouted out, “Because I’m God!”

It’s been reported that Martial’s sister previously pleaded that a hospital keep him as an inpatient, to no avail.

It wasn’t clear, however, that the troubled Martial targeted Go, a 40-year-old Upper West Sider, because she was Asian. In fact, seconds before, he had allegedly zeroed in on another woman who was non-Asian; noticing him approach, she felt afraid and dodged out of harm’s way.

Ben Wei, the group’s founder and director, said he started the nonprofit after a friend of a friend was stabbed in the back while walking on the street in Chinatown in February 2021 and almost lost his life.

“There has been a painful history in the past few years of violent individuals attacking members of our community,” Wei said. He noted that while hate crimes over all were down during the first year of the pandemic that saw the lockdown, they spiked against Asian Americans and have continued to remain well above past levels.

Wei vowed that Asians Fighting Injustice will hold political leaders’ feet to the fire until the violence, as well as the conditions that cause it, are addressed.

“We will hold them accountable that the safety of New Yorkers is a human right,” he said. “We have a right to be safe on our streets and in our subways.”

Part of that safety equation, he said, involves “how do we humanely and thoughtfully treat mental illness?”

“These are hard problems,” Wei said, “and I know that as New Yorkers working together, we will solve them.”

Similarly, Queens Congressmember Grace Meng said the solutions are difficult but that something must be done to make the city safer.

“There are too many people,” she said, “especially in the Asian community, who are terrified — terrified to walk the streets, terrified to go to the grocery store, to take the subway, to leave their homes.”

Quoting Dr. Martin Luther King Jr. on the day after MLK Day, she said, “Injustice anywhere is a threat to justice everywhere.” In the same vein, she said, “None of us can be safe if there’s any community that does not feel safe.

“This is a complicated problem,” she said. “The roots are deep, deeply rooted in poverty and racism. We need to have these tough conversations.”

Echoing Councilmember Erik Bottcher, who is advocating for eight concrete steps to address the mental-health crisis, Meng said the process of putting the mentally ill in jail and then releasing them into homeless shelters is part of a chronic problem.

“We must ensure that we have a plan of intervention and prevention,” Adams said. “My deployment of law enforcement officers with mental health professionals to identify those that are in need and give them the services immediately is what we must do right now.”

For his part, Public Advocate Jumaane Williams placed blame on former President Trump for his provocative anti-China rhetoric during the pandemic.

“It was clear that there was a president that was pushing and pushing anti-Asian sentiment,” Williams said.

Also echoing another point of Bottcher’s, the public advocate said supportive housing for the homeless mentally ill must be created.

“The M.T.A. should not be a place to house the mentally ill,” he declared. “Neither is Rikers. It is time to build the infrastructure out. We have the money to do it. We just need the political will.”

Listening on the sidelines was Curtis Sliwa, the Guardian Angels founder who ran for mayor against Adams. After the event was over, Sliwa said the city should do “sweeps” of the subway system to identify and remove “emotionally disabled” individuals from it.

“They give the same speech every time,” he scoffed of the politicians who made remarks at the memorial event. “Years ago, they used to sweep the subways, take the emotionally disabled and put them in hospitals. De Blasio didn’t do it. Adams hasn’t done it.”

He said the litmus test is if a person is deemed to be a danger to themselves or to others.

In fact, Sliwa claimed to have bumped into Martial in the subway twice in the past month or so. The first time, as he told it, was on the 42nd Street Shuttle.

“He was sane and lucid,” the Guardian Angels leader said. “I had a long conversation with him.”

The next time they met, according to Sliwa, was on the No. 1 train platform at Times Square.

“He was psychotic,” he said.

Asked what he did about it, Sliwa claimed, “I grabbed him, talked to him sternly. He recognized me and he calmed down.”

In addition, Sliwa noted that, as part of the Defund the Police push by the City Council and Mayor de Blasio, the Police Department’s Homeless Outreach Unit was disbanded and its officers reassigned elsewhere. The unit was formerly headquartered in Greenwich Village at 12th Street and University Place. Sliwa said reinstating the unit would help address the homeless situation since the officers had good contacts with hospitals where people can get treatment, and would take individuals there if they were deemed to need that level of help.

Referring to his race against Adams in the November mayoral election, Sliwa noted that concerns over safety — as well as over Gifted and Talented classes and the specialized high school admission test — prompted more Asians to vote Republican. Democrats can’t take the Asian vote for granted, he warned.