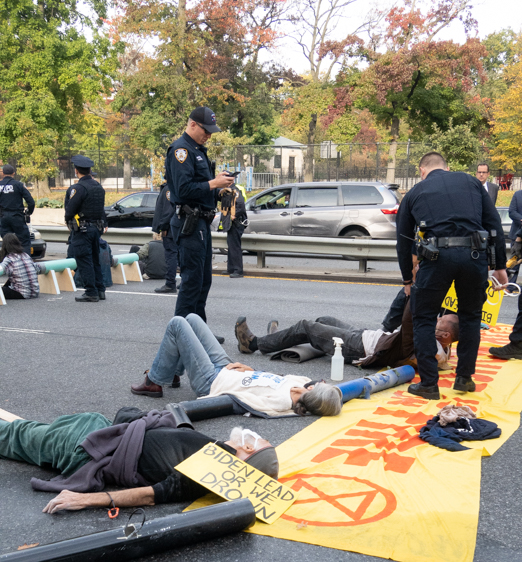 Activists with Extinction Rebellion blocked traffic on the F.D.R. Drive for an hour on Monday. (Courtesy ERPA)

BY LINCOLN ANDERSON | Chanting “Save East River Park!” climate-change activists blocked traffic on the F.D.R. Drive for about an hour Monday around noon.

The activists were not with East River Park ACTION or 1,000 Trees 1,000 People but with a larger global organization, Extinction Rebellion.

Harriet Hirshorn, a videographer who had gone to East River Park to see if any work was starting on the East Side Coastal Resilency project, said that two rows of proteters, about a dozen in all, were sitting on the F.D.R. Drive’s northbound lane just south of the Colears Hook pedestrian bridge, a bit south of Grand Street. They also lay down on their backs on the highway. The demonstrators’ arms were linked together through plastic PVC tubes.

“At first, we thought it was us,” Hirshorn told The Village Sun.

Extinction Rebellion is doing a week of protests around the city during the run-up to the COP 26 United Nations Climate Change Conference in Glasgow, Scotland, which starts Oct. 31.

According to Hirshorn, the Extinction Rebellion members who blocked the highway actually weren’t doing it to protest the city’s contentious plan to bury the entire 60-acre park in order to rebuilt it 8 feet to 10 feet higher. Instead they were there to protest carbon emissions and global warming, in general.

“It wasn’t about the park,” she said. “It was basically a part of Extinction Rebellion, the idea that we are killing the planet. ‘Not one tree more’ is one of their standard chants that they do in many languages around the world.

She said, however, that the group’s leader actually was familar with the East River Park issue.

Eventually, police sent reinforcements and started using a circular saw to cut the protesters’ arms out of the PVC tubes.

“They terrified a woman,” Hirshorn noted. “She was afraid they were going to cut her arm.”

She said cops had towels on hand, in case they cut the protesters, and would call out for more water to pour on the spot where the saw was cutting.

Police said 13 people were arrested and that charges are pending.

The park activist said Extinction Rebellion’s action was “fanastic…incredibly well organized.” Seeing the group block traffic on the F.D.R. was heartening, she said.

“We’ve always known we were natural allies,” she said of ERPA and Extinction Rebellion, “but this morning was the first time that it felt like a reality.”

To get its message out there, the global group engages in “bold actions,” like blocking roads and bridges.

“Through Extinction Rebellion’s nonviolent civil disobedience, people like you are disrupting business as usual to demand deep decarbonisation,” the group’s mission statement says, in part. “Every single person who protests is increasing our chances of creating a better future. Bold actions like occupying roads, blockading bridges and creatively disrupting the work of banks which finance the climate crisis can capture government and media attention and change the conversation in ways conventional resistance hasn’t.”

Howard Brandstein, the director of the Sixth Street Community Center, among others, has pointed out the irony that the F.D.R. Drive itself is part of the cause of climate change — the very problem that is being used as justification to destroy East River Park in order to jack up its height. Activists back decking over the highway as part of the park’s resiliency project.

Hirshhorn was in the park Monday to video the former spot of a successful community composting site that was shut down for the impending resiliency project.

“I wanted to thoroughly document that the compost yard was gone,” she said. “It was 22 years old. It’s one of the ways community can respond to climate change.”

Monday was slated as the first day contractors would start operations as part of the park-elevating project. The former compost yard is slated to become a temporary passive lawn for use while other areas of the park are cordoned off for the yearslong work.

In addition, on Nov. 1, fencing is scheduled to go up around most of the park’s tennis courts — a couple reportedly will be left open — and the bathrooms.

Also, next month, the mixed-use bike path that runs along the length of the park’s eastern edge is slated to be closed down — and remain closed all the way through 2026, when all the work in the park is scheduled to be completed.