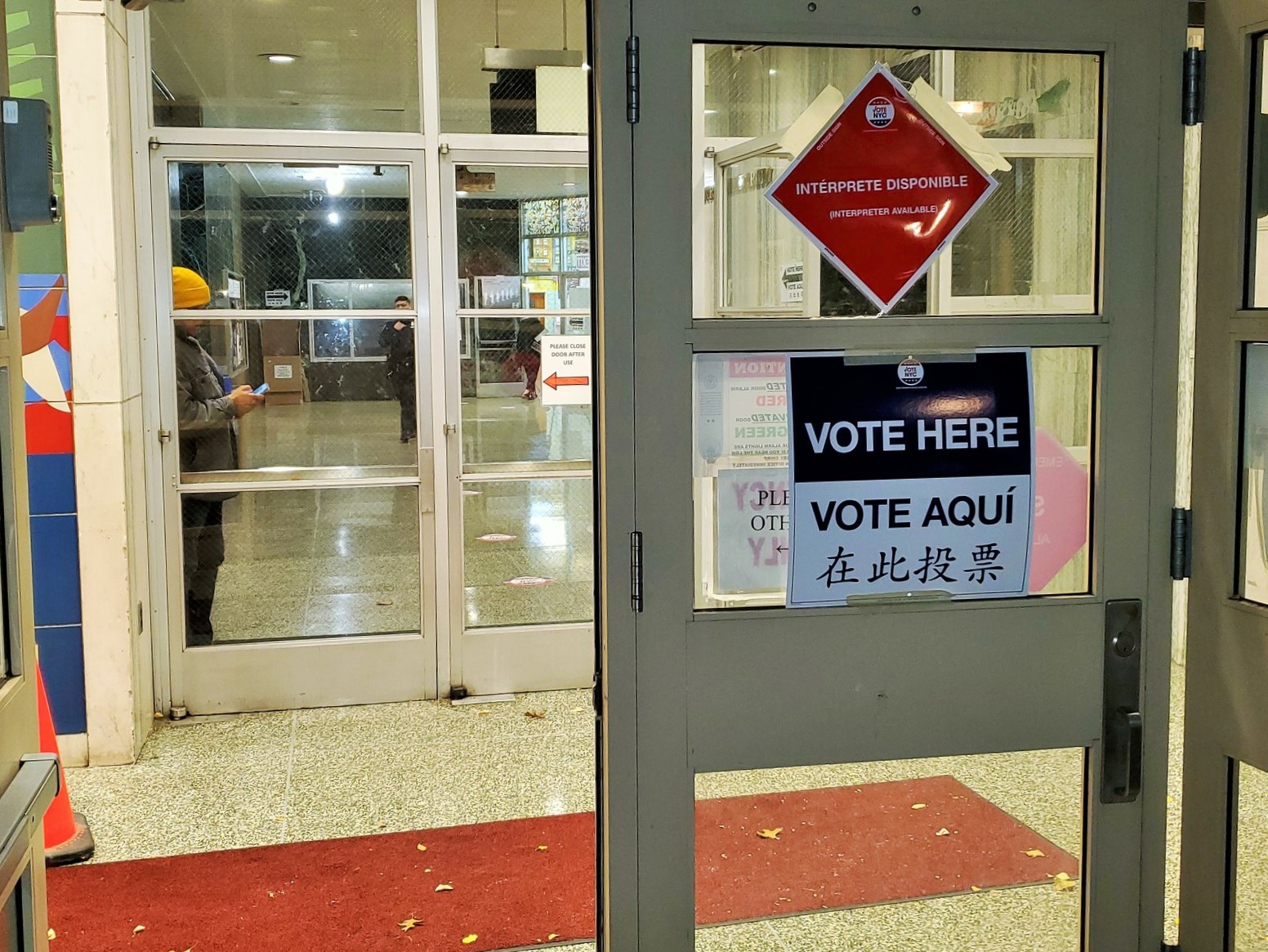 Abortion, Trump and state of Sixth Avenue were all on the ballot on Election Day

BY LINCOLN ANDERSON | As the dust has settled from the midterm elections, it’s clear that abortion and “saving democracy” — that is, not backing candidates who backed the Trump big lie — helped turn the vaunted red wave into a measly red trickle.

Yet, even in deep-blue Downtown Manhattan, some voters interviewed by The Village Sun on Election Day last week outside the polls were lukewarm at best about Governor Kathy Hochul, while others actually turned out expressly to vote for her G.O.P. rival, Lee Zeldin.

They weren’t the only ones feeling that way. In the end, despite New York State being have more than twice as many registered Democrats as Republicans, Hochul eked out a victory over Zeldin by just 52 percent to 47 percent.

More than a few Village voters said they were primarily concerned about crime and public safety — in particular, along the Sixth Avenue corridor. While some actually voted for Zeldin, others said they had been considering it, but, in the end, could not due to his stance on abortion and his vote against certifying the 2020 election.

Zach, 33, who did not want to give his last name, had just voted at P.S. 41, on W. 11th Street at Sixth Avenue, around 8 p.m. on Election Night. He lives north of Eighth Street on Sixth Avenue, the latter, he said, which sports many vacant storefronts and has “just been a dark pocket.” It’s “a no-go zone” for his wife at night, he said. The W. Fourth Street subway station is not a good scene either, in his view.

He claimed he has witnessed crimes — including someone getting pickpocketed — noting, “It’s certainly more visible than it’s been.”

He said at night he hears shouting and fighting on the street outside his window.

“I voted for Zeldin,” he shared. “I left the rest empty.”

A longtime merchant on Sixth Avenue near Eighth Street recently told The Village Sun that the street has been more chaotic than he can ever remember. Offering some hope, though, after being announced three of four years ago, a new grocery store is finally slated to open in the former Duane Reade space at Waverly Place, which will help enliven the stretch.

“I voted for Hochul, begrudgingly, because Lee Zeldin is an election denier and voted not to certify the election,” said Jessica, 40, a corporate lawyer. “Someone more moderate would have gotten my vote. That was a bridge too far.”

She said, in general, she might vote for a Republican “if they’re not a Trumper.” In this case, she did vote for a number of other Republicans on the ballot in other races “as a counterbalance,” as she put it.

“I think one party having too much power is a problem,” she said.

However, she did not vote for Eric Rassi on the Medical Freedom Party line versus Democrat Brian Kavanagh for state Senate. Rassi only got around 3.4 percent of the vote.

“I like people to stay alive,” she quipped. “Pretty much anyone who wasn’t a Trumper or an anti-vaxxer got my vote.”

Owen, in his 20s, who works in real estate and lives right around the corner, rushed in to try to cast his ballot right before the polls closed. However, indicating he’s not a habitual voter, the two-year Village resident was turned away because he’s not registered to vote here. He is a registered Republican, but in his native state of Connecticut.

Owen said crime and quality of life had compelled him to vote — or try to.

“Look around, man,” he said. “I’ve never seen New York City this bad. I take the subway every day to work — it’s a bloodbath.”

However, another voter, Claire, while admittedly extremely concerned about safety, in general, and street conditions on Sixth Avenue, in particular, said the Supreme Court’s overturning Roe v. Wade eclipsed all other issues for her this election. As for Zeldin, he has backed criminalizing abortions after 20 weeks.

“I’m fiscally conservative but socially liberal,” she said. “You can’t lose the right to choose, so I voted Democratic on everything. Abortion is such a huge issue. It’s treating people like second-class citizens. They’re going to kill women with this.”

She fumed of the Republians, “They’re morons — because women like me will never vote for them again. They shot themselves in the foot.”

That said, she is very concerned about conditions on the street, especially in the Bronx, where she works in harm reduction with substance abusers.

“It’s incredibly dangerous,” she said. “I’ve never seen it like this before — where I’m always terrified.”

A New York University graduate, Claire lives on Sixth Avenue at Waverly Place. She said her building management had actually rigged up a scaffold system to create dripping water to keep homeless guys and drug users from hanging out in front of the bank on the corner.

Regarding street homeless people who are using drugs, she said with concern, “There’s so many facilities they could be in, and they’re not using [drugs] responsibly.”

However, David Seabrook, 63, a U.S. Postal Service worker who lives in the Village, said his decisions on Election Day were not difficult at all.

“I went with whatever the Village Independent Democrats card had,” he said, noting a friend shared the card with him.

“I voted for Hochul because she’s a woman,” he said. “She brings a perspective as a woman. I don’t know…she seems O.K.”

Although the flow of voters was light in the evening, Michael, a P.S. 41 poll worker, said the site had been “extremely busy” earlier in the day from 6 a.m. to 10 a.m. Clearly, local voters were eager to weigh in on the critical midterm elections and the governor’s race.

A bit earlier that evening, over on the East Side — where voters typically lean farther left — John Stubbs, 47, a nonunion carpenter, had just voted at P.S. 751, on E. Fourth Street between First and Second Avenues. He spoke while unlocking his bike from a steet pole.

“Voting against the Republican Party platform, start to finish — not a single thing I like about it,” he said of his approach to his ballot.

He said he voted against Zeldin “because we don’t need to join Mississippi or Alabama here.”

Stubbs O.K.’d three of the four ballot proposals but not the one to create a “Racial Equity Office, Plan and Commission,” of which he opined, “It’s going a little over the top.”

He voted for Chuck Schumer’s Republican opponent, feeling Schumer has been in office long enough already.

“I would have liked to see somebody [else] pick it up at this point,” he said. “I think we should have term limits. The only exception to that is Bernie Sanders — like a Ruth Bader [Ginsburg].”

An Asian woman who asked to be identified only as D, said she was a Democrat, adding, “and of course I support the goodness they are doing for our city.”

A harm-reduction worker on the Lower East Side, she felt strongly about backing the ballot proposals to create a Racial Equity Commission, as well as an environmental bond act for climate issues.

“Of course, you know that my race was affected during the pandemic,” she said, referring to the surge of anti-Asian violence. “That’s not why I moved to New York. I love the cosmopolitan New York City that I came here for.”

Another woman, 33, who works in healthcare and declined to give her name, said the choice for governor was made clear simply because of who Hochul was not.

“I usually look for a Green to vote for,” she said, “but the race seems to have tightened. And it’s not Cuomo — so that gets that out of the way.”

Todd, 75, an East Village native, a percussionist who teaches GED classes, sported a black ball cap with the orange “NY” logo of the baseball New York Giants, his favorite team when he was a kid. He said he voted for the environmental bond act.

“Anything improving the infrastructure of the resiliency — that seems sort of necessary. The lights were out down here — this is real,” he recalled of Hurricane Sandy.

Yet, he said he opposed the East Side Coastal Resiliency project, which has already bulldozed the southern half of East River Park, as part of a megaproject to raise the park from 8 feet to 10 feet to put it above the floodplain.

“I’m against it,” he said. “There had to be a better way to deal with it, I would think. It’s very sad to see all the tree stumps.”