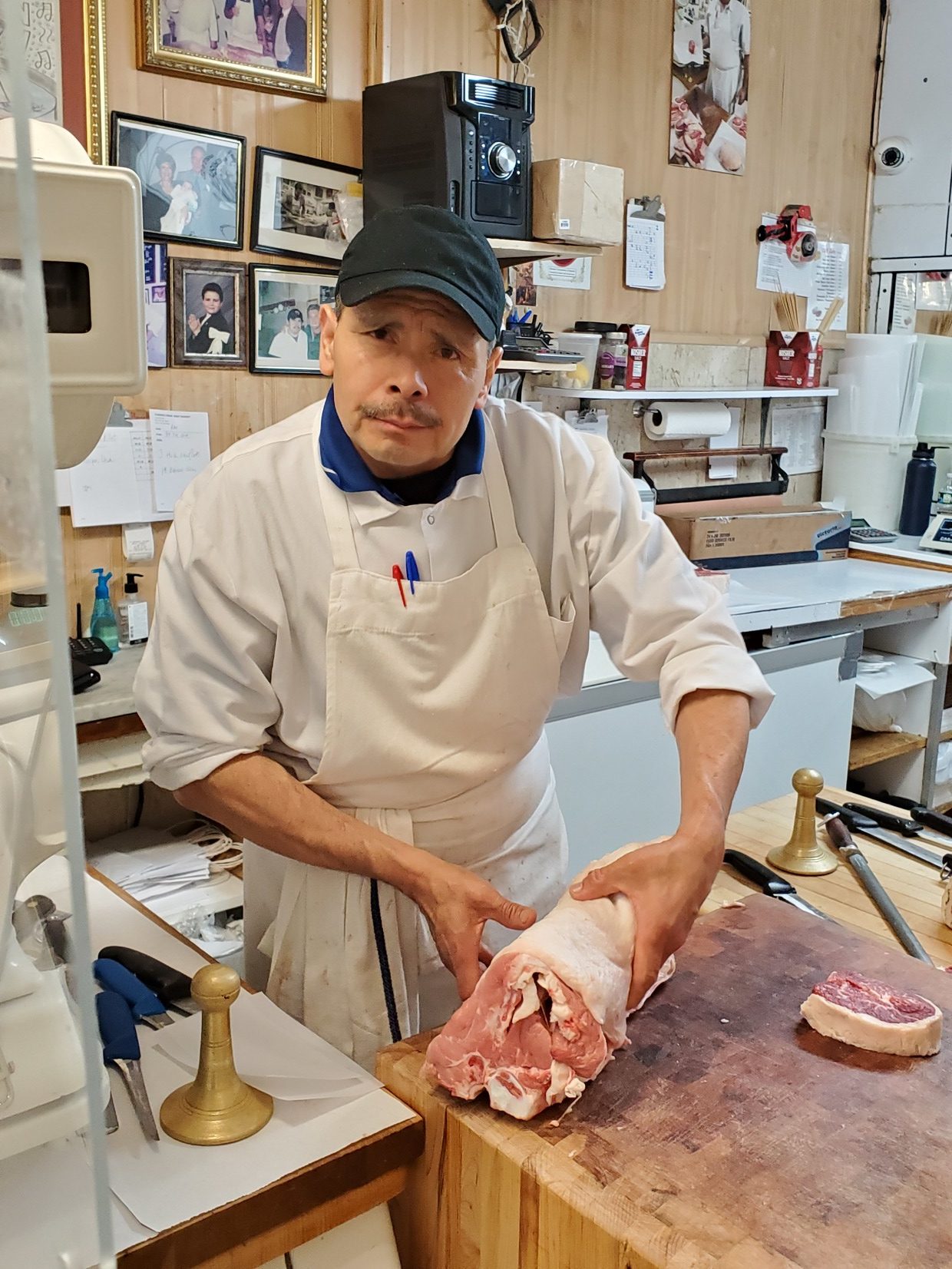 Aristeo Quiñonez with a cut of meat at Florence Prime Meat Market. (Photo by The Village Sun)

BY LINCOLN ANDERSON | It would have been the cruelest cut for its devoted customers if Florence Prime Meat Market had closed.

Earlier this month, Eater reported that Benny Pizzuco, the owner of the venerable, 86-year-old butcher shop at 5 Jones St., planned to let the place’s lease expire and that it would then shut its doors for good on March 26.

Pizzuco, it was said, had offered to sell the shop to his workers but they couldn’t reach an agreement. However, something was subsequently worked out because now butcher Aristeo Quiñonez and his family will be running the business. Pizzuco, meanwhile, will continue to run his meat wholesale operation on Long Island, where he lives.

“We had to talk with the landlord,” explained Maria Alava, a longtime worker at the shop. “The landlord accepted us.”

Quiñonez declined to make public the terms of the agreement.

Along with Quiñonez, his adult children will work alongside him at the store, including Jonathan, Myra, Evelyn and Daisy.

On Friday, the narrow, hole-in-the-wall shop was doing a steady business selling to walk-in customers and filling delivery orders. Because the space is so small and there is so much fresh meat being cut, the smell is instense. You could call it total meat immersion.

Miriam, a longtime customer from Tribeca sat on a small bench waiting for her order.

“I appreciate you guys being here,” she said. “I felt suicidal. Every summer I come back from vacation, and I say, ‘If you’re closed, I’m going to kill myself.'”

Pizzuco had been teetering on the edge of closing the shop in recent years. Sales were already down due to changed consumer habits, with people patronizing traditional butchers less — and then COVID hit. Business was good on holidays, but that was not enough to sustain the shop through the rest of the year.

“The last two years, it was very hard,” Alava admitted.

Florence Meat Market was founded by Jack Ubaldi in 1936. Tony Pellegrino bought the business in 1972, followed by Pizzuco in 1995

Quiñonez, who lives in Queens, has worked at the store for more than 30 years. He started out as a delivery boy under Pellegrino, then went on to learn the craft and eventually become a master butcher.

“And it is in good hands now,” Alava assured of the business. “Aristeo knows everything. He knows how the customers take the orders.”

Alava began working there a bit before him. She’s helping out now during the transition as Quiñonez and his children take the reins.

Alava proudly showed off a copy of “Jack Ubaldi’s Meat Book,” as well as a framed photo of celebrity chef Tyler Florence on the wall. If there was some sort of “Florence” connection behind the latter, she didn’t mention it.

As Alava spoke and customers filed in and out, Quiñonez and two other workers were busy cutting and preparing meat. The two other workers will go back and forth between Pizzuco’s Long Island wholesale place and Florence Prime Meat Market.

Quiñonez was in constant motion, retrieving varied cuts of meat from the walk-in refrigerator in the shop’s rear, then dressing each one with expertise.

“Look how he cuts it,” Alava said in hushed awe, as she watched.

Like a surgeon wielding his knife, Quiñonez deftly cut a groove into a big piece of prime rib, then inserted a hacksaw into the cut, and with a few powerful strokes, finished the job. Next he cut a 2-inch, extra-thick porterhouse steak, trimming the congealed fat around it a bit.

Behind him, Adrian Rendon was intently boning lamb, which would be made into lamb sausage. Florence Prime Meat Market makes all its own sausage.

The outpouring of support after Eater reported the place would be closing was heartwarming, Alava said.

“We had a tremendous amount of people coming all this month, saying, ‘Don’t close!'” she said.

Although relieved that Florence Prime Meat Market will stay, patrons are very concerned about whether there will be any changes to this authentic, historic Greenwich Village business.

The shop will continue to use all the same equipment, some of which is original from the 1930s, plus the same meat purveyors.

“Customers want to know if it will be the same meat,” Alava noted. “Even some worry of the wrapping they use for the meat. All yes, the same.”