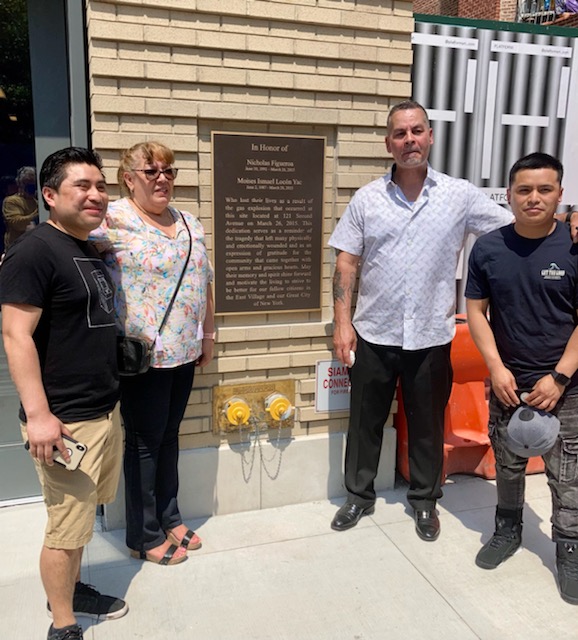 BY THE VILLGE SUN | Marking the site of one of the most shocking disasters — and notorious crimes — in East Village history, a plaque was recently dedicated at the site of the Second Ave. gas explosion that rocked the neighborhood six years ago.

Two men lost their lives, and three buildings, between E. Seventh St. and St. Mark’s Place, were destroyed after a landlord’s illegal gas tap caused a massive blast on March 26, 2015, that turned into a roaring inferno.

The two victims were Nicholas Figuero, 23, who was on a date at Sushi Park restaurant, and Moises Ismael Locón Yac, 27, a busboy at the Asian eatery.

Thirteen people in total were injured in the explosion, including a Berkeley student who was heading to Pommes Frites for some Belgian fries and lost an eye.

In January 2020, landlord Maria Hrynenko, 59, unlicensed plumber Athanasios “Jerry” Ioannidis, 63, and contractor Dilber Kukic, 44, after having been found guilty of manslaughter, assault and reckless endangerment, were sentenced to four to 12 years in prison.

Now a new building has been constructed on part of the site where the three destroyed walk-up tenements once stood.

A little more than a week ago, family members of Figuero and Locon were joined there for a plaque dedication by local politicians and others from the neighborhood, plus the prosecutors who put the three conspirators away.