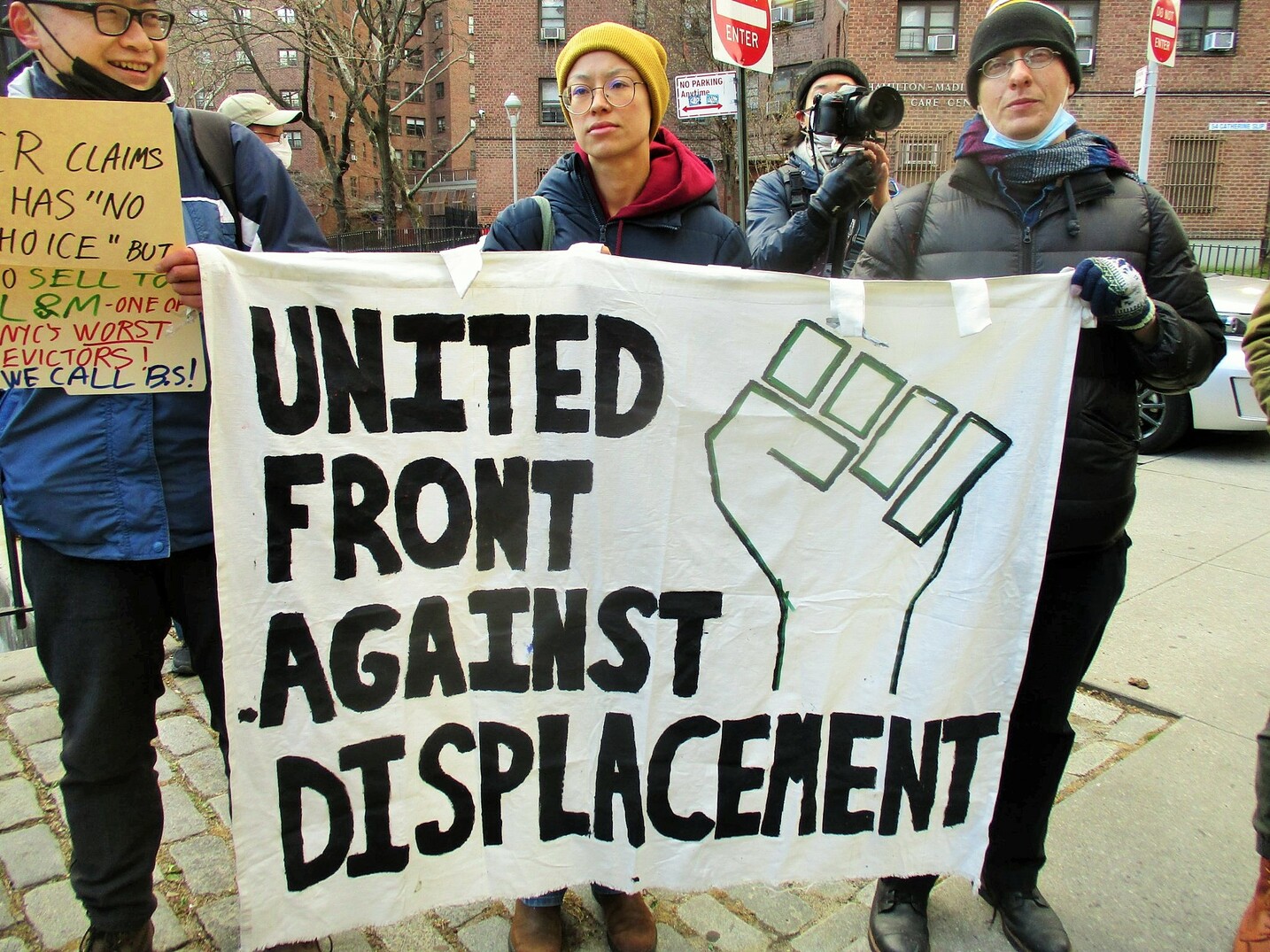 Opponents of Knickerbocker Village's sale to L&M Development protested on March 28 before a meeting to set rents for incoming tenants. (Photo by Bill Weinberg)

BY LINCOLN ANDERSON | Opponents of the plan to sell Knickerbocker Village have made themselves heard loud and clear at two recent protests. They fear a loss of affordability at the historic Lower East Side apartment complex, and worry that low-income tenants will be forced out.

However, the three co-chairpersons of the Knickerbocker Village Tenants Association, in a lengthy interview with The Village Sun, recently laid out why they think the sale to L&M Development Partners is, in fact, the best available path forward for the 1,600-unit, Article 4 development.

(Due to a problem The Village Sun experienced with an unasked-for “anti-spam filter,” which blocked e-mails to the newspaper from the T.A. members, their views were not included in the newspaper’s previous article two weeks ago on Knickerbocker Village.)

The three T.A. co-leaders, Anna Kustera, Christina Zhang and Shi Xing Yang, spoke with The Village Sun on March 25, three days before a budget rent determination (B.R.D.) hearing was held near Knickerbocker Village to set rents for incoming tenants. The B.R.D. hearings — there are separate ones for current tenants — are held every two years by the state housing agency Homes and Community Renewal, which sets the complex’s rents.

The three tenant co-leaders are longtime Knickerbocker Village residents, having lived there from 26 to 36 years. Zhang has lived there all her life.

“We have been meeting with H.C.R. and L&M for one year on this,” Kustera said. “It’s been a very long process. It was tricky, we have to say. Here we are dealing with L&M, a new landlord, a new developer on the Lower East Side.

“We got a three-year rent freeze, which we felt will be very, very helpful to the tenants here,” she said. “We were really trying to look out for the tenants is what I’m trying to stress here.”

“We’re pretty much the last Article 4-based complex,” Zhang noted, adding there is another one in the Bronx.

While being in the Article 4 program means Knickerbocker Village is reserved for low-income tenants, the program actually doesn’t protect against rent increases, Zhang noted.

In fact, in 2019 the current owner, Cherry Green, requested a 13 percent rent increase. According to the T.A. leaders, it was only thanks to then-Councilmember Margaret Chin’s being able to secure a $3.1 million tax abatement for 50 years that the rent increase was ultimately kept to only 6 percent.

“I’m not sure the tenants understand that Article 4 does not protect against rent increases,” Zhang said. “It’s not like we [currently] get a rent increase every year,” he acknowledged, “but when we do, it’s pretty high.”

This time around, according to the T.A. leaders, the word from H.C.R. was that, due to inflation and rising costs of gas and insurance, the tenants would face rent increases of from 8 percent to 12 percent per year over the next two years — unless, that is, the L&M sale went forward.

In addition, L&M has agreed to cap future annual rent increases, in perpetuity, at no higher than 2.5 percent. L&M had initially wanted to set this cap at 3 percent, but the T.A. negotiated it down, the three co-chairpersons said.

“We felt that was a pretty good deal,” Kustera said.

“That’s the max,” Yang said of the 3 percent cap, though admitting, “We wanted to get that lower.”

Yang noted that over the past 20 years, the average rent increase at Knickerbocker Village was 3.1 percent and, over the past 10 years, 1.3 percent.

During the budget rent determination, or B.R.D., process, if H.C.R. determines that operating costs don’t justify an increase for a given year, then there is none. Ironically, in 2011, Cherry Green requested a 9.4 percent rent increase — yet H.C.R. approved one even higher, 9.6 percent.

Another key part of the deal with L&M is the introduction of federal, project-based vouchers. Current tenants in one-quarter of the apartments, or 397, will get these P.B.V.s, allowing them to only pay $300 per month in rent. Federal money funneled through the New York City Housing Authority — $1,700 for each of these apartments — will make up the difference. So, as Kustera explained it, L&M “will be making market-rate rent,” or $2,000 per month, on these P.B.V. apartments.

In turn, this P.B.V. money will be used to make repairs to the nearly 90-year-old complex.

Sale opponents have accused the T.A. of ripping down their protest fliers inside Knickerbocker Village. But the three tenant leaders said, don’t blame them, blame management, and that the T.A. did not remove any fliers.

“We have to request permission from management to post,” Yang said. “Obviously, it’s management’s call on who can post. Ninety percent of the time, they allow it. But not if it’s about rent increases or us shaming them.”

While some of the opponents have accused the T.A. of negotiating with L&M without the help of an attorney, that’s untrue, the members said. They have a pro bono counsel but also hired an additional attorney when it came to crunch time during the negotiations.

At the same time, she added, “We’re all just volunteers.”

Kuster said the accusations of the T.A. not being open about its thinking and negotiations on the L&M deal definitely stung.

“It really got us upset,” Kustera said.

He added, though, that putting informational letters under the doors of 1,600 apartments, as they did, was “a big undertaking.”

“We have an extensive mailing list,” Kustera noted, referring to the informational notices they e-mailed to tenants. However, she admitted that, unfortunately, many of the seniors in the officially recognized NORC (Naturally Occurring Retirement Community) are not computer savvy.

“Every one of our meetings was posted through internal distribution,” Zhang said. “We also posted in every single elevator.”

As for complaints that the “chat was disabled” during the Zoom meetings, preventing tenants from communicating with each other, Kustera said L&M handled the meetings.

“L&M felt that outside people were dialing in,” added Yang.

The opponents charge that L&M has a bad track record on maintenance issues. However, Yang said the complex’s current owners, Cherry Green, “are not great owners.”

“We were left in the dark during Sandy,” he recalled. “When everyone got their lights back, our lights were out for another month.”

Cherry Green also tried to deregulate the complex, to take it out of the Article 4 program, but the tenants fought back.

“The land is worth a fortune — but we were under Article 4,” Zhang added.

“I don’t think they’ll be any different than the way it is now,” Yang shrugged of whether it’s likely L&M will manage the property any worse than Cherry Green.

Kustera said that, again, H.C.R. has oversight over the Article 4 complex, which provides a safety net.

They said H.C.R. is considered a better oversight agency than NYCHA.

As for the threat of low-income tenants being kicked out of the complex under new owners, the trio felt it would be unlikely.

“They talk about people being displaced,” he said of the critics who oppose the rent-stabilizing deal. “People are going to be displaced if the rents go up.”

As for the P.B.V.s, Yang admitted that a tenant getting one of these is “like winning the lottery,” since his or her rent would then be capped at just $300. The vouchers were being given out on a first-come, first-served basis. If a current P.B.V. tenant moves away or becomes ineligible, that voucher, in turn, will be given to an incoming tenant, not from the Knickerbocker Village waiting list, but from the New York City Housing Authority waiting list. The T.A. had fought to keep the vouchers solely for the complex’s own waiting list but was told that would be “financial discrimination.”

Meanwhile, Yang said, “Some tenants that were going to be receiving these P.B.V. vouchers signed the petition [against the sale]. It doesn’t make sense.”

Zhang chimed in, “I know there were people who signed [the petition] who got P.B.V.s.”

Yang said he and his fellow T.A. co-chairpersons very much want to keep Knickerbocker Village affordable, although L&M will be adding more income levels to the mix. Specifically, the plan calls for three different tiers of Area Median Income (A.M.I.) limits — low, middle and high — for incoming tenants.

“We tried to fight it,” Yang said.

The A.M.I. is calculated based on the entire New York City region, not specifically on the Two Bridges area of the Lower East Side, where Knickerbocker Village is located. One hundred precent A.M.I. is $83,600 for a single person and $107,400 for a family of three.

Electricity is included in all of the Knickerbocker Village tenants’ rent, though they must pay for gas.

“We were trying to fight the A.M.I.,” Kustera said of L&M’s push to institute the three A.M.I. income bands for incoming tenants. “People keep talking about displacement: Our number one goal is to keep people here that want to be here.”

The T.A., he said, had wanted to “keep Knickerbocker the way it is: It’s one pie — everybody’s in the same boat.”

However, the plan’s opponents continue to try to block the complex’s sale. Before the B.R.D. hearing on Mon., March 28, they held a protest in front of 50 Madison St. against the plan. Afterward, they attended the hearing.

According to Jennifer Chiao, 24, a lifelong Knickerbocker Village resident, there were “tech problems with the audio, H.C.R. seemed unprepared and tenants were angry.”

“Tenants are still not getting the information that they need,” she said.

Chiao said she’s not appeased by H.C.R.’s assurance that, if L&M takes over, rents for the 1,500 existing Knickerbocker tenants would be frozen for three years. The massive, new One Manhattan Square tower by Extell Development just north of the Manhattan Bridge is all the evidence she needs.

“This neighborhood is not the neighborhood I grew up in,” she said. “We used to go to shop at the Pathmark. Now I’m looking at the Extell tower that’s on top of what used to be our supermarket. So I fear the new owners of Knickerbocker being incentivized to push out low-income tenants. We are immigrant, working-class families, and Extell was not made for people like us. So our buildings being taken over by one of New York’s worst evicters doesn’t sit right in my stomach. Developers are eating up our community, and low-income tenants don’t have a Plan B.”

— With reporting by Bill Weinberg