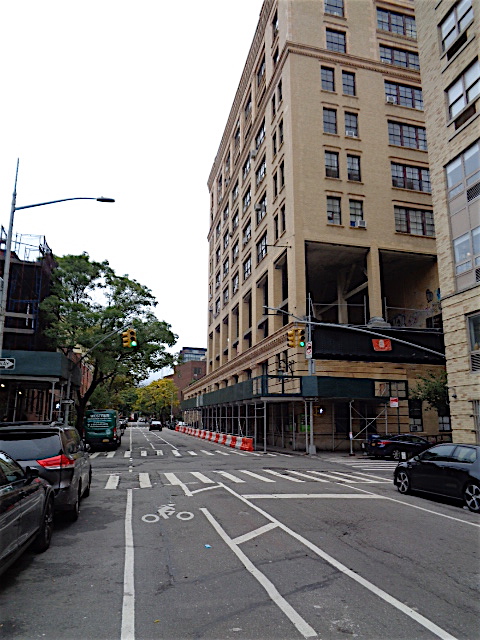 Washington and Bethune Sts., with Westbeth Artists Housing on the right. (Photo by Jonathan Kuhn)

A little love for Washington Street

BY MICHELE HERMAN | Washington is way up high on lists of the most common street names in the U.S — on some lists it makes the top 10 if you remove the ones that are just numbers. The name is so ubiquitous that it doesn’t carry any particular connotation, except that it’s likely to run through an old part of town.

You may have your own childhood Washington Street. Mine, in my hometown of Norwalk, CT, is hard to sum up in a few words. The town’s geography, transportation and socioeconomic history are right there up and down its quarter-mile length: a commuter-railroad bridge sits above it at one end and at the other the street itself becomes a drawbridge over the Norwalk River where it begins emptying into Norwalk Harbor, which in turn empties into Long Island Sound. In my lifetime Washington Street went from a bustling shopping area to a slum and then climbed back out again in the 1970s with a revitalization project that restored its handsome historic buildings, way before the loaded term “gentrification” was in wide use.

“Our” Washington Street here on the Lower West Side of Manhattan also is hard to sum up in a few words. You might even say it has no identity. Its northern boundary being 14th Street, it encompasses the Gansevoort Meat Market turned high-end fashion district turned — well, whatever it might morph into next; at the moment it’s an amalgam of Tesla, Samsung and Diane von Furstenberg showrooms mixed with a tony hotel and a lot of empty storefronts.

As Washington Street travels down to Soho, much of it is taken up by UPS’s long, blank garage on the east and the massive construction site that will replace the St. John’s Terminal building adjacent to the massive Department of Sanitation facility on the west.

Washington Street hits a roadblock when it gets to Canal St. (the narrow edge of Canal Park, raised up a step from street level). It picks up again on the Tribeca side of Canal, though the traffic switches from southbound to northbound. For a few blocks it’s a land that time forgot, made up of handsome brick Romanesque Revival buildings with a few tasteful re-creations mixed in. And then it dead-ends unceremoniously at Hubert Street, hitting the superblock of the Citi Global Markets “campus.”

George Washington died in 1799, and the street named for him was probably mapped not long after. It sits on land deeded to the city by Trinity Church, that mighty landlord. On maps from as early as 1807 you can see its straight line roughly parallel to the Hudson River, all the way to the Battery.

Fast-forward to the last decades of the 19th century for one of Washington Street’s most interesting chapters. Refugees fleeing persecution by the Ottoman Empire, most of them Arabic-speaking Christians, settled in the tenement district of Washington Street’s southernmost stretch. That’s how the area came to be known as Little Syria. Like so many immigrant neighborhoods, it was full of squalor but also creative energy. Authors Kahlil Gibran and Ameen Rihani lived there. At its peak, dozens of Arabic periodicals were published there.

Lower Washington Street has been sacrificed many times, most notably for Brooklyn-Battery Tunnel ramps in the 1940s and then for the World Trade Center complex in the early ’60s. Now all that remains of it below Hubert Street are a couple of sad, discontinuous bits, and you could live a lifetime in Manhattan and never happen upon them.

Why am I suddenly so keen on Washington Street, a thoroughfare that has never gotten much love from anyone? For starters, it forms the eastern boundary of my block in the far West Village, and my windows look out onto it.

I actually gave up running last fall, fearing the long-term impact of running on granite, the unfortunate paving material of Hudson River Park’s promenade. But this spring I felt itchy for forward motion of any kind and for the invigorated but calm way I feel after a run, and I started up again. Not only is the granite hard, the promenade is now way too full of sweaty, panting humans not always being very thoughtful about masks or distance.

So one day I ran down Washington Street. I like to think I know this island fairly well, so it felt odd to realize that I had only the vaguest sense of what becomes of my local thoroughfare just a couple of neighborhoods south of mine.

I’ve grown to enjoy the route. Once I get below Morton Street there are so few humans that I can slip off my mask. And often there’s so little car traffic that I can run right on the asphalt.

I wave to the lone UPS guard stationed at one of the many truck bays. Gotham Gym’s personal trainers have moved to the sidewalk, so I get to watch guys kickboxing and bouncing a medicine ball. I’ve seen a Swedish coffee place at Watts Street gradually transform itself into a Greek restaurant and market. I get up close to a building I’ve always admired from afar, the fanciful neo-Flemish Fleming Smith Warehouse.

My second new reason for focusing on Washington Street: I just finished a beguiling novel called “The Golem and the Jinni,” recommended by a former student of mine who published a beguiling novel of her own, “The Jane Austen Project.” Both books read like literary fiction but start with a crazy “what if” fantasy of the sort I wish I’d dreamed up myself.

In “The Golem and the Jinni,” the first title character, as you might expect, lives — if “lives” is the right word for a woman made of clay — on the Lower East Side. But much of the story takes place in and around a tinsmith shop down in Little Syria, specifically on Washington Street. That’s where the genie (the anglicized version of the Arabic jinni) turns up. Whenever I’m immersed in a novel I feel that I spend part of my day roaming around in its world, so I feel I’ve been living two lives lately, more than a century apart, both of them close by Washington Street.

I realize I’m living a third and fourth life here, too. One ended abruptly in mid-March. The other hovers on the horizon, as the bitter election plays out and the virus plays its cold-weather hand.

When I run down to Hubert Street, I look up at the big glass wall in front of me. I think about poor Little Syria on the far side of it, where uprooted people lived hard lives for half a century before their neighborhood, main drag included, was obliterated. And then I say the name “Citi Global Markets” to myself and shudder, because it sounds so like a corporation in a dystopian horror movie.

I think about the movieless, theaterless, cabaretless, restaurantless winter ahead, and trust that my little household will get through intact, if a bit stir crazy. But I worry about the impact on this battered nation and its people. I fear that the coming lean years will stretch to a lean decade for New York City, which has barely begun to sift through the rubble of 2020.

Some good always emerges from bad. Maybe the wealth gap will stop widening. Maybe the economic fallout will breed more creative solutions for our hollowed-out storefronts than just more urgent-care facilities. I can practically imagine some hopeful immigrant opening a tinsmith shop on Washington Street where people can bring their metal goods for repair; stranger things have already happened in 2020.