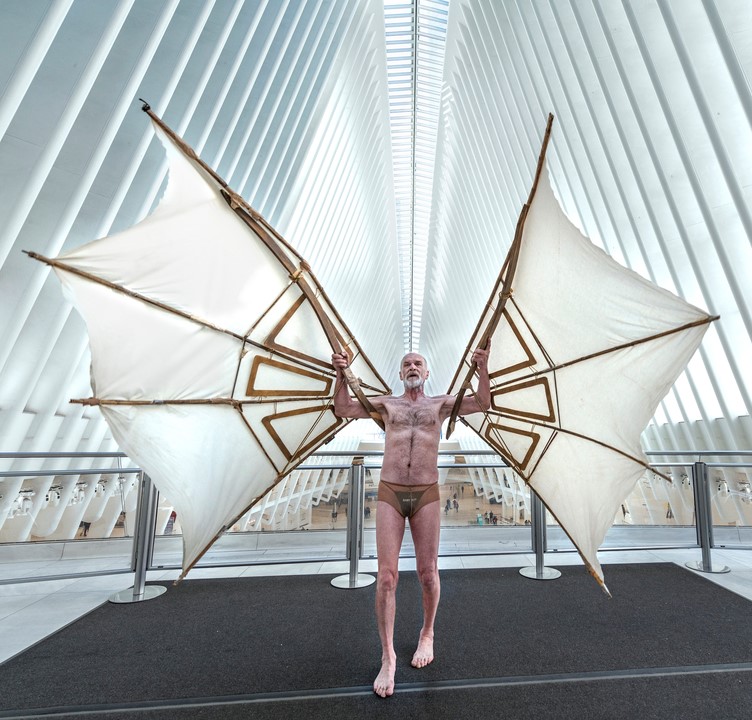 "Wings of Desire," photographed at the Oculus, lends its name to Zbigniew Zolkowski's first solo gallery show. (Courtesy the artist)

Zbigniew Zolkowski: The artist who came in from the street

BY STEPHEN DiLAURO | Zbigniew Zolkowski may be one of the most interesting artists of our time and virtually no one knows who he is. His work can be environmental, political, disturbing, challenging and, yes, beautiful.

After 45 years as the consummate outsider New York City artist, the 71-year-old Zolkowski (known to friends and supporters as “Joey Baby”) is having his first solo gallery exhibition at a pop-up Trocha Gallery, 55 Avenue C in the East Village.

Outsider art is generally defined as art created outside the official (read corporate) culture. It is often very fanciful.

“Now that police surveillance can see everything that’s created in the street and send in its agents to remove unauthorized art overnight, before it’s ever seen, it became necessary to bring this work into a gallery,” said Pawel Trocha, the curator, photographer, documentarian and longtime supporter who put the show together for Zolkowski. (The globe-trotting East Village artist Janusz Gilewicz is also a supporter and is one of the sponsors of the show.)

“We’re hoping that an established art dealer will see the exhibition and start showing Joey Baby’s work in a proper gallery,” added Trocha.

Some of Trocha’s photos of the artist in situ with his various outdoor works are on display. They let the viewer understand the degree of commitment that Zolkowski has. This guy is all in, like no other artist I’ve encountered in more than 40 years covering the art world. Creation seems to be his only motivation. The photos show him lying spread-eagled on his back among some of his sculptures on display in a toxic pond in Flushing, Queens; or seeming to float on the water’s surface in saffron robes like a mad Buddha.

“At one point it became difficult to create my work in the streets, so I began to work in places so polluted officials can’t be bothered to remove it,” Zolkowski said.

His installations can often turn into performance during the creative process. Passersby are frequently drawn in, as when he was installing an array of colorful tubes in the East River at low tide and a woman stripped naked and jumped in to help.

All of the physical elements in Zolkowski’s work are found materials, with the exception of the resin he uses to bind the disparate detritus of contemporary society. The centerpiece of the current gallery exhibit is the “Chamber of Mirrors” — a huge room with framed mirrors transformed to reflect some truths about society-wide narcissistic perceptions. These pieces — indeed, the entire room — serve as a portal into another dimension that is ruled by Zolkowski’s artistic vision.

“This is the pinnacle of Joey’s work,” said Trocha. “This is how it should be seen.”

The exhibit is titled “Wings of Desire.” All I can say is you must see this work.

All the mirrors were found on the street by the artist over the last two years. Broken glass, crucifixes, gold hoop earrings, bangles, hypodermic syringes, screws, nails, pigeon wings, brass .22-caliber shell casings, spoons, pebbles, rhinestones, meat hooks, steel ball bearings, computer circuit boards, eyeglass lens blanks and more are all arranged and affixed to the mirrors’ surfaces. All the pieces were created during the pandemic.

“I can go into my spirit and feel good about myself,” the artist said of his own reaction to his first solo exhibition.

Unlike the corporate-sponsored mainstream cultural institutions like museums, which consider themselves above the fray when it comes to ecology and the carbon footprints of some contemporary installation art, Zolkowski brings the notion of recycling to a whole new level. It’s much more than sorting your household garbage to make it easy for Mafia-run trash haulers to profit on select items in the name of recycling.

Zolkowski demonstrates a sly sense of humor in his work. After decades of creating public work that, due to its outlaw nature, was often ephemeral and eventually disappeared, the current exhibition presents solid artistic ideas. Initially, upon entering the “Chamber of Mirrors,” light and overall surface beauty are striking first impressions. It is only upon closer examination that the intensity of the materials begins to make clear that this is not just about beauty. It reflects upon a society that deceives itself at every possible opportunity. Half a million overdose deaths from the Big Pharma opioid epidemic required hypodermic needles as much as the COVID-19 vaccine jabs did.

Zolkowski was born in Poland and moved to Greenpoint with his family at age 11. He was a teenager when he decided to become an artist. He has never looked back. Unlike many artists who are considered outsiders, Zolkowski studied art and has an M.F.A. in studio art from the University of Oregon. The artist cites Robert Rauschenberg, Joseph Beuys and Marcel Duchamp as his biggest influences.

Pawel Trocha set up a Web site, www.theartofzz.com, which contains lots of retrospective info. (Zolkowski’s drawings are wild.) Otherwise, the artist has almost no Internet or social media presence. For example, if you search “Joey Baby” all you will find are pictures of baby kangaroos. Yet, the artist has done more than 1,000 documented public installations, many with a performance element.

There was a private viewing on May 18 and the opening reception was May 20. Ten percent of the sales of the art will be donated to the Bowery Mission.

“Wings of Desire,” the art of Zbigniew Zolkowski, at Trocha Gallery, 55 Avenue C, through Thurs., June 10.