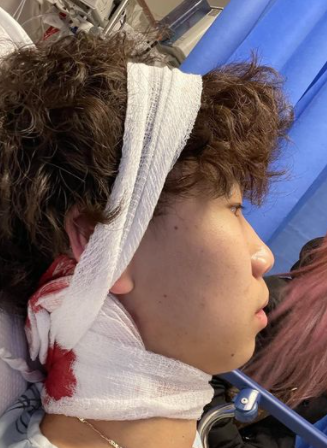 Michael Chen was slashed on the Bowery on March 12.

BY THE VILLAGE SUN | A young social-media influencer survived a slashing in the East Village earlier this month — and, without missing a beat, took to YouTube to tell the tale.

Michael Chen, 17, from Great Neck was outside Phebe’s Tavern, at Bowery and Third Street, with a large group of young women on Sat., March 12, around 1:10 a.m., when he was approached by a stranger.

According to a police report, the two males got into a dispute.

However, as Chen tells it, the other man, who “didn’t look crazy or homeless…just a regular dude,” wanted to know how Chen “pulled” so many women, and also started talking to his girlfriend. But Chen, in his YouTube video about the incident, didn’t indicate there was any dispute and that he stayed cool.

Chen said he told the man the secret to dating success is to “be yourself,” then walked off toward the nearby 7-Eleven. Twenty seconds later, though, the Internet personality felt a slap on the back of the right side of his head below his ear. It turned out the other guy had slashed him with a sharp object — a box cutter, according to Chen.

The suspect fled on foot northbound toward E. Fourth Street, police said. The victim was removed in stable condition to Bellevue Hospital, where he got eight stitches.

The suspect is described as around 5 feet 11 inches tall, weighing 190 pounds, with black hair with braids. Chen said the man also wore a “blue puffer jacket.”

A police spokesperson told The Village Sun that, at this point, the slashing is not considered an anti-Asian hate crime.

However, in his YouTube video, Chen says that after cutting him, the attacker called him a “pussy ass chink.”

But the vlogger, who also goes by McPlayGT, doesn’t dwell on it. At the end of his YouTube, he simply urges everyone to stay safe.

“White, black, yellow, any color, bro, any gender, just be careful, yo,” he says, “because they’ll attack anyone. … Be careful. It’s crazy. New York is crazy.”

Posting on Instagram with photos of his bloody head bandaged in Bellevue, he wrote, “Not sure if it was a asian hate crime or jealousy type thing.”

Chen vowed to stay active on all his channels, including Snapchat and TikTok, the latter on which he does prank videos.

He was apparently talking about followers not dollars.

Chen mentioned the East Village slashing when he testifed against the Housing Works homeless shelter planned at Grand Street and Bowery in Chinatown at Thursday night’s Community Board 2 meeting.

“When I was little here in Chinatown, it was fun,” he said. “Now it’s like a danger zone. How did this happen?”

Police ask that anyone with information call the N.Y.P.D.’s Crime Stoppers Hotline at 1-800-577-TIPS (8477) or for Spanish, 1-888-57-PISTA (74782). Tips can also be submitted by logging onto the Crime Stoppers Web site at crimestoppers.nypdonline.org or on Twitter at @NYPDTips. All tips are strictly confidential.