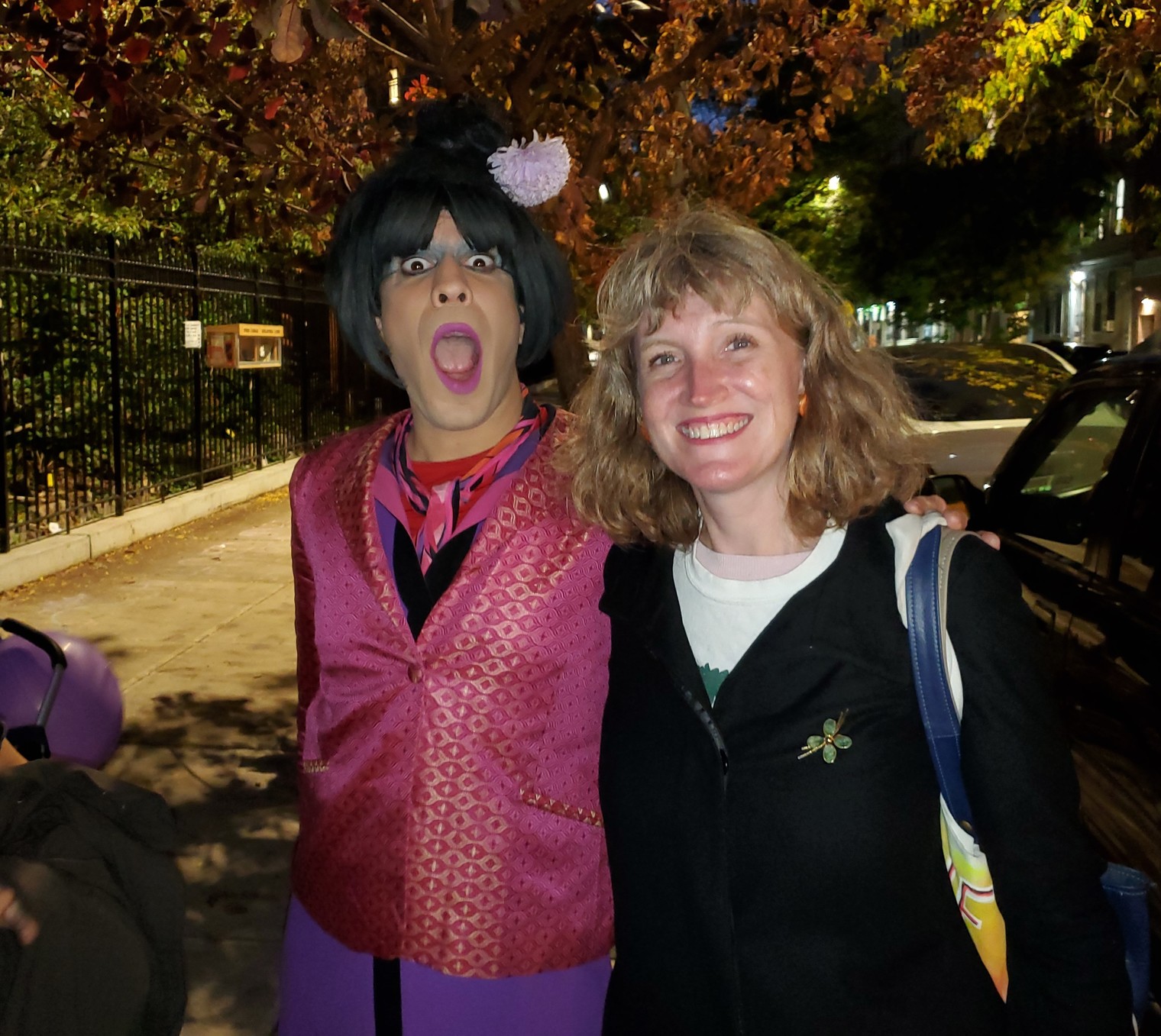 ‘You have a choice’: Allie Ryan campaigns for accountability and saving East River Park

BY LINCOLN ANDERSON | Allie Ryan has the endorsement of the Claudi party.

That is Claudi, the lead singer of Pinc Louds, the East Village’s hottest band, said they, meaning Claudi, were endorsing the City Council candidate at Sunday’s Halloween party at La Plaza Cultural, at which the band had just played.

Beyond the Pinc Louds frontperson, Ryan, a first-time candidate from the East Village, is counting on a broad swath of voters — many of whom she knows personally as friends — at the polls on Tues., Nov. 2. She got to know many of them through Chris Ryan, her husband, a longtime East Villager. They married 11 years ago and are raising two daughters.

“Chris is part of the underground punk music scene, artists, environmental activists,” she noted. “They overlap.”

Allie Ryan released a new campaign video in the days leading up to the Nov. 2 election.

Many of the people partying to Pinc Louds at La Plaza in festive costumes Sunday afternoon could be called part of Allie Ryan’s base. As Chris would ask them as the left the garden if they were voting on Tuesday, many said they had already voted early — for Allie.

While she said that the incumbent, Carlina Rivera, doesn’t seem to be campaigning too hard or sweating it, Allie Ryan wants voters to know that there are options on Nov. 2. Her campaign motto is “You Have a Choice.”

“The idea is to make people aware that there are three people in this race,” she said.

Rivera, after winning the June Democratic primary election, holds the Democratic line, while Ryan and Juan Pagan are running on independent third-party lines. Ryan is the Neighborhood Party candidate and Pagan is the Independent Party candidate. Pagan, a Jacob Riis Houses activist, is a perennial candidate but has never gotten over the hump to win an election. Ryan would seem to be the wild card in this race.

Ryan is still sore that Rivera, apparently wanting to play it safe, ducked a debate with her and Pagan on Manhattan Neighborhood Network public-access cable TV. She accused Rivera of looking beyond the election and setting her sights on becoming the next City Council speaker.

On Sunday, Ryan stood on the sidewalk in front of the garden, at Ninth Street and Avenue C, because she said its rules don’t allow politics inside of it. In an interview with The Village Sun as her kids occasionally scampered around her, Ryan talked about her campaign experience and the issues that matter to her.

Over both days of the weekend, she had talked to voters at the Trader Joe’s and Target stores in Kips Bay and the Associated and Key Food supermarkets in the East Village.

On Sunday, after joining a protest march to save East River Park, she held a campaign rally in Tompkins Square Park. But she said she knew so many people in the crowd, she ended up just saying hello and talking with them, since she hadn’t seen some of them for a few years. Her “family band” of her husband and daughters, Viriginia and Ruby Lee, played songs and Eak the Geek, a sideshow performer with copious facial tattoos, read a poem.

“Eak’s poem was amazing,” she said.

“I’ve enjoyed running for office,” Ryan said. “It’s been a lot of fun. What has been humbling to me, wherever I’ve traveled, it doesn’t matter what neighborhood in the district, I’m running for accountability. People recognize that our leadership is not meeting the needs of our communitty but siding with the mayor.”

She said that’s been most apparent on the East Side Coastal Resiliency project, which would destroy East River Park in order to rebuild it above the floodplain. East River Park, as those who have been following the race know, is Ryan’s top issue and the main reason she says she decided to throw her hat into the ring. The next day, in fact, she and another park activist were arrested while trying to block the demolition of East River Park’s tennis courts, the city’s opening move in the destruction plan for the 82-year-old park.

In the north end of District 2, in Kips Bay, she said voters are concerned about quality-of-life impacts from the 30th Street Men’s Shelter and two hotels serving the homeless, at 30th Street and Lexington Avenue and Park Avenue and 29th Street. They also want to see more real parks, not astroturf, she said.

“One woman in Kips Bay told me she wanted an Elizabeth Street Garden,” she said.

In the East Village, some locals are more concerned about Tompkins Square Park, with its recent homeless encampments and overflowing trash cans, plus the poorly timed plan to close the park’s bathrooms and park office building for renovation simultaneously with the East River Park demolition. As an area resident, Ryan is also personally concerned about these issues at Tompkins.

“I’m not against [the encampments],” she said. “But I think it’s very clear they need supportive housing. It’s clear they’re self-medicating.”

Another problem as Ryan sees it, and which has been noted by others, like the East Village Neighbors Facebook group, is the growing use of injection drugs on the streets.

More to the point, she feels there has been “inaction” by City Hall on the homeless crisis. For example, residents living around First Avenue and 14th Street are very upset over the entrenched, sketchy “thieves market” at the intersection’s southeast corner that authorities just seem to be ignoring, she said.

“People tell me, ‘If you’re elected, do something about that block,”” she said.

“It’s from a place of compassion,” she stressed of wanting to help people living on the streets. “Parents are not wanting their kids to see young adults shooting up or human feces or people defecating.”

At one point as she spoke, a disheveled-looking but friendly guy, who badly needed a shower and some clean clothes, came up and engaged her in conversation. He kept leaning in and giving her COVID-style elbow bumps, and she obliged with a smile, before he walked off unsteadily.

“I met him last week,” she said. “He told me he was the president of the United States. He said he would vote for me.”

She had also seen him one other time since then, when he was in crisis and being aided by EMTs.

In general, Ryan vows, if elected, to tackle what she calls “neglected District 2 quality-of-life issues,” including outdoor dining and e-bikes. She said an older man on her street who died in September who was “the mayor of the block,” had been knocked down twice by bikes, including once by an e-bike.

“He said, ‘I want you to regulate e-bikes,'” she said. As for what that would mean, she said, “No riding on sidewalks, not going in the opposite direction of traffic. I don’t know if tickets will solve the problem.”

A schools advocate, Ryan has strong views on education, including supporting a longer school year, so that students don’t exprerience “knowledge loss” over the summer.

As she spoke, Bill DiPaola, the garden’s events committee chairperson, exited La Plaza, toting a fire extinguisher in each hand. He accidentally blasted The Village Sun with one of them.

“We just had a fire dance in there,” he said.

DiPaola, who is also director of the nearby Museum of Reclaimed Urban Space (MoRUS), said he was proud of Ryan, who formerly volunteered with Time’s Up, an environmental-action group he also leads. It was — who else? — Chris, her bicycle-activist husband, who introducted Allie to the group.

“I think she’s the first Time’s Up volunteer to ever run for office,” DiPaola noted.

Asked if he tought Ryan could pull off a stunning upset and beat an incumbent councilmember, he offered, “Sometimes you kind of have to run a first time for name recognition. It’s like a musician: You put out a good album, then the next one is the one that really sells. Let’s hope the album sticks.”

As usual around election time, there is a campaign poster war going on, at least there is, according to Ryan. She said some of her posters have been pulled down and slashed, and that three local businesses reported they “got phone calls” asking them to take down her posters in their stores.

“We live in a democracy,” she protested. “Whey are people taking down anyone’s posters? They did that to Erin, too.”

She was referring to Erin Hussein, the co-op president at Stewart House, at 10th Street and Broadway, who got 26 percent of the vote in the June Democratic primary versus Rivera.

Meanwhile, a Rivera spokesperson said, “We don’t know anything about the posters.”

Ryan has some other novel ideas, like a way to combat noisy and dangerous rooftop parties: Incentivize rooftop solar panels.

Chris Ryan was busy handing out campaign palm cards to people leaving La Plaza, which had by now, after the Pinc Louds show, morphed mainly into a haunted garden for kids and adults to enjoy. Dressed in a long white beard, he was Dumbledore from Harry Potter and the kids were Ginny Weasley and Luna Lovegood.

“I voted for your wife yesterday,” one man told him as he left La Plaza.

“We used to do playdates with them,” Chris Ryan reflected.

Predicting the voter turnout, he said, “I think it’s going to be light and informed.”

After several efforts, one of the candidate’s daughters finally succeeded in getting her to go into the garden and get a fortune reading.

Before she did, Ryan reiterated that the district’s voters want change and that she has genuinely enjoyed talking about the issues with them.

“They’re very interested in what’s going on,” she told The Village Sun. “It’s really nice to talk about issues that you don’t see in the news — except for your paper.”