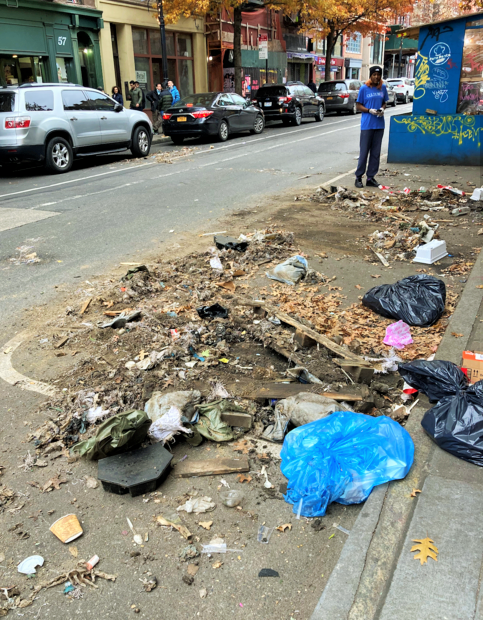 A pile of garbage, including dead rats, was left after the Culture An American Yogurt Company's dining shed was dismantled. (Photo by Marc Adler)

Yo(gurt)! Rats fight back as dining shed is demolished on 8th Street

BY MARC ADLER | On Sunday, around 10:30 a.m., I was walking down Eighth Street by the intersection of Sixth Avenue, and I noticed some 1-800-GOT-JUNK people removing the shed in front of Culture An American Yogurt Company.

Great, I thought…the owner realized that he did not need that dilapidated shed anymore and called some people to remove it. I snapped a photo of the demolition.

About 90 minutes later, I returned to the spot and found an employee of the yogurt store in some despair. She said that the 1-800-GOT-JUNK people uncovered various rat nests and that the rats started to attack them. The wreckers decided they could not proceed with the demolition and just left the area.

What was remaining was a huge pile of garbage and dead rats. The yogurt worker did not know what to do. I told her to call the Department of Sanitation because they might be best equipped to handle this. The worker did not want to have to clean this mess up herself. This is the kind of trash and infestation that might be lying underneath almost every shed.