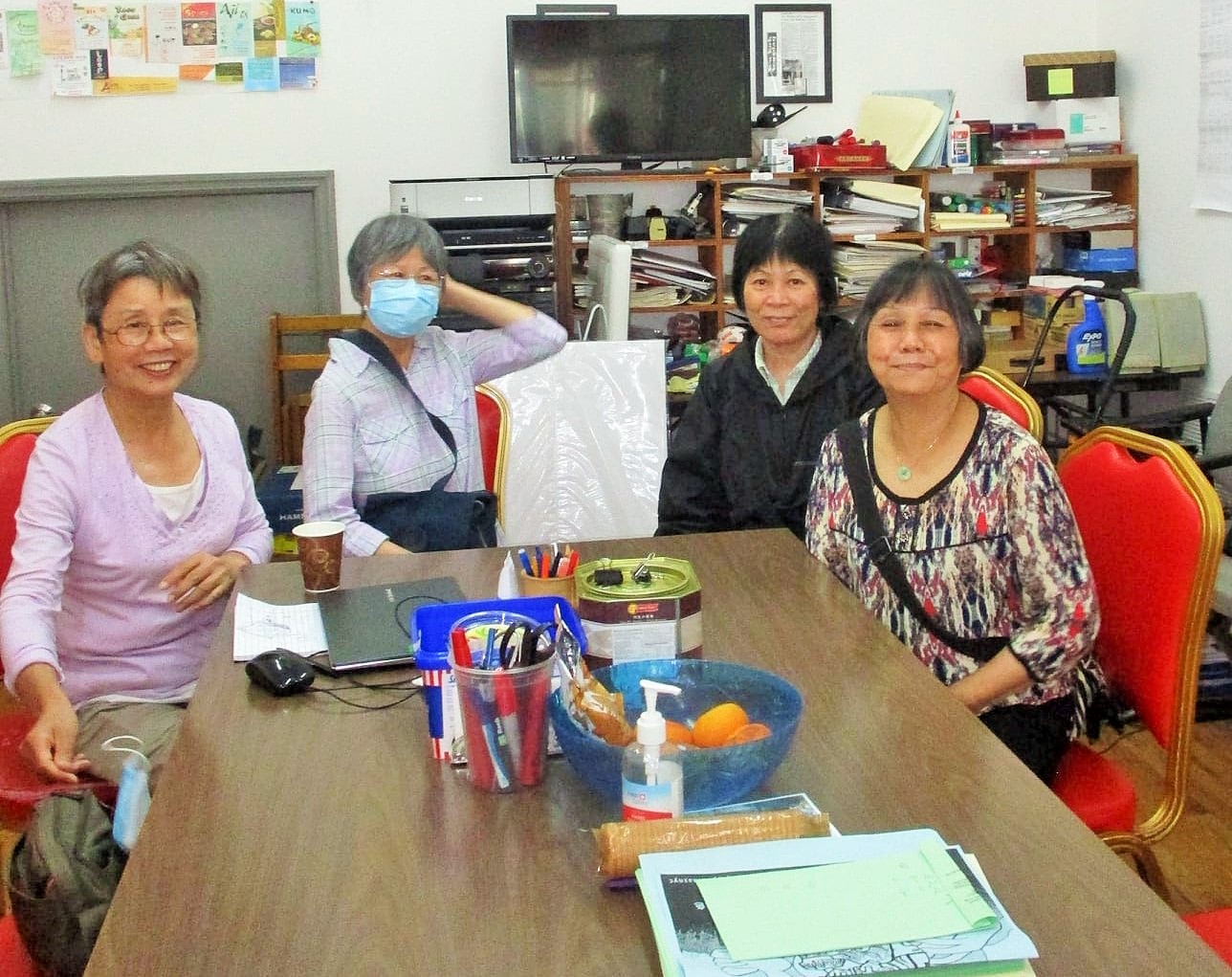 BY MARY REINHOLZ | Campaign workers on a Lower East Side block near the Tenement Museum were outdoors promoting their candidates in the final days before the June 22 Democratic primary. At least one was vigorously touting Andrew Yang, the former presidential contender in the mayor’s race and its onetime front-runner.

Yang, a centrist Democrat who’s been slipping in recent polls, is regarded by many white progressives as a lightweight. But he’s a hero of oppressed workers to some activists in this diverse rapidly gentrifying neighborhood.

“I like him and I’m going to vote for him,” said Lai Yee Chan, a retired 66-year-old homecare worker who joined three other immigrant women for an interview with The Village Sun at the Chinese Staff and Workers Association, a militant leftist labor rights group headquartered on 345 Grand St.

The women were there to discuss the notorious 24-hour workday imposed sometimes in multiple consecutive shifts on low-income home attendants who receive only 13 hours of pay. This is a wage described as a regulation by the New York State Department of Labor that has the force of law. It’s funded  through state and federal sources via Medicaid.

Yang, after attending a Flushing town hall meeting last month with healthcare workers and  Assemblymember Ron Kim, registered his opposition to the regulation by signing a CSWA petition against it that also condemns alleged malpractice at a homecare agency run by The Chinese-American Planning Council.

A press release from Yang’s campaign notes that he seeks reforms in New York’s homecare industry — including better pay for workers and two 12-hour shifts to replace the 24-hour work day.

The Labor Department’s so-called 13-hour pay rule is based on the premise that home attendants are off the job for 11 hours and thus don’t need compensation for eight hours of sleep (five of them now required to be “uninterrupted”), plus three hours for breaks and meals, after caring for elderly and disabled clients in their residences. Critics say the formula is unfair, immoral and absurd, for starters.

Wing Lam, executive director of CSWA., has been advocating for homecare workers since at least 2014, more recently joining other activists in the “Ain’t I a Woman?” sister campaign to organize demonstrations against Governor Cuomo, the 1199 SIEU union and the aforementioned Chinese-American Planning Council (CPC). The latter agency is one of New York City’s largest nonprofits and reportedly receives more than $220 million a year in public funds, spending $184 million on its Home Attendant Program. The unit provides homecare workers to senior citizens in the five boroughs.

Lam claims that CPC “forces” vulnerable immigrant women of color to work the grueling 24-hour shifts or not work at all, causing some to become sick and disabled themselves.

“They suffer so much,” he said. “Some of their [clients] are seriously ill and need 24-hour care and assistance getting to the bathroom sometimes five times a night.”

He said about 200 healthcare workers employed by the Chinese-American Planning Council’s home attendant unit had come to him for help over the years.

Andrew Yang, Lam said, was the “only candidate” for mayor who signed the CSWA’s petition denouncing CPC for allegedly “exploiting” the home attendants and demanding that they pay back wages and also apologize. Unlike Assemblymember Kim, Lam hasn’t endorsed the tech entrepreneur for mayor “because I disagree with him on other issues — like more police — but he deserves credit for supporting the workers.”

As for other candidates, Lam said two of them ducked answering questions on the issue.

“We sent a letter to Kathryn Garcia and heard nothing back,” he said of the former Department of Sanitation commissioner.

“The same thing with Maya Wiley,” a prominent former MSNBC television commentator, civil-rights attorney and former counsel to Mayor de Blasio. “She should be ashamed of herself. This is violence against women,” Lam said of the 24-hour workday. “But Wiley is being backed” by 1199 SIEU, he noted. Lam said the progressive union has “blocked” class-action lawsuits against homecare agencies for six years —reportedly by negotiating an arbitration agreement with the homecare agencies to stop aggrieved employees from going forward in the courts with class-action lawsuits.

George Gresham, the 1199 SIEU regional president, has said that the issue of funding for 24-hour cases “is not an issue controlled by 1199, but instead one that must be addressed in Albany through the allocation of roughly $1 billion in Medicaid funding,” according to a statement circulated last year and quoted recently in The Nation magazine.

Wayne Ho, president and C.E.O. of CPC, has dismissed what he calls “false” claims by activists that the agency’s homecare unit is engaged in wage theft and recently called for an end to the 24-hour workday.

Carmela Huang, a supervising attorney for the employment unit of the Legal Aid Society who worked with Lam on homecare cases when she was employed at the Urban Justice Center, said almost no workers receive breaks on 24-hour shifts, “so only a tiny minority get five hours  continuous sleep.” She opined that, “1199 knows that they work 24 hours. They’re thinking these claims are so enormous that each worker would be entitled to hundreds and thousands of dollars” in back pay.

The  homecare agencies won a victory in 2019 when New York’s Court of Appeals overturned a lower court ruling that had called the 13-hour wage for 24 hours work “not rational and not reasonable.”

Even so, Lai Yee Chan, one of the four retired homecare workers who met with The Village Sun at the CSWA, is still pressing her 2015 class-action law suit against the Chinese-American Planning Council. As a retired homecare worker, she’s apparently not bound by arbitration affecting working home attendants. She recalled working three and sometimes four consecutive 24-hour shifts caring for an elderly disabled man in Chinatown, when there apparently weren’t many opportunities for five hours of “uninterrupted” sleep.

“I’d help him get to the bathroom, and make breakfast for him,” she said. “I’d then take him to the bedroom because he was paralyzed. I also took him to doctors’ appointments in his wheelchair.”

Despite their hardships, homecare workers in New York State are expected to increase 33 percent between 2014 and 2024 — from more than 437,000 workers to about 580,000 workers, according to PHI, a data research group on direct-care workers based in the Bronx. But a PHI report noted that because of low wages and “inconsistent hours,” 43 percent of direct-care workers in New York fall below 200 percent of the federal poverty line, and nearly half rely on public assistance. Yet demand for homecare is growing as the number of older adults live longer and require longtime care.

Some New York pols hope conditions will improve for homecare workers and their clients if a bill banning the 24-hour workday and replacing it with two 12-hour shifts covering 50 hours is enacted by the New York State Legislature. The bill was introduced in 2019 by Assemblymember Harvey Epstein and state Senator Roxanne Persaud, along with the “Ain’t I a Woman” campaign at the site of the Triangle Shirtwaist Fire. The legislation is currently in committee and still “getting worked on,” said an Albany source.

The bill was stalled when the state Labor Department issued an emergency regulation, saying the 13-hour pay for a 24-hour work shift was “O.K. as long as the workers got five hours of uninterrupted sleep,” Epstein said in a phone interview. “We have to get more political pressure to get this [legislation] done. Low-wage workers need this money. The [regulation] is outrageous and we need to get it stopped.”

Longtime Assemblymember Richard Gottfried, chairperson of the chamber’s Health Committee and a co-sponsor of the bill, put it this way in a statement to The Village Sun: “If a worker is required to be at the work site and be ready to work at a moment’s notice, the worker ought to be paid for those hours, even if they’re allowed to eat or sleep. The so-called ’13-hour rule’ deprives home health aides of fair compensation.  The court’s modification of the rule is widely ignored, to the disadvantage of these underpaid essential workers. Expecting people to do demanding vital work beyond a 12-hour shift is harsh on the worker and undermines the quality of care for the patient.”