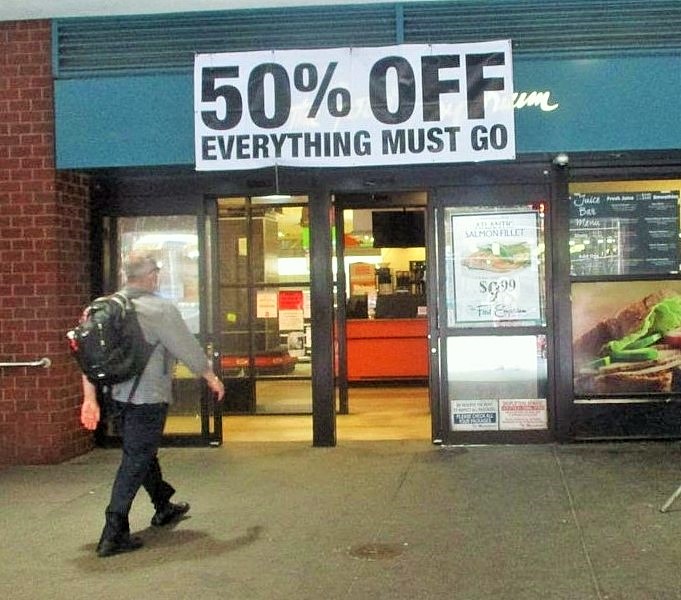 In its final days, the Food Emporium was offering half off on what was left. (Photo by Mary Reinholz)

BY MARY REINHOLZ | The Food Emporium’s branch at 10 Union Square East has slashed prices by 50 percent before its scheduled closing Sun., May 30, to make way for a second Target store on E. 14th St.

There’s not much left at the upscale supermarket, a mainstay in the neighborhood for more than 20 years. A spokesperson for Target did not disclose the date of the store’s arrival when The Village Sun made inquiries.

Target reportedly bought out a 16-year lease from F.E.’s owner, Key Food Cooperative Inc., last year in a deal that was brokered by agents for Target and for the ownership of the building, Empire State Real Estate Trust, Inc., an REIF that lists 10 Union Square East as one of its subsidiaries. Empire State manages the Empire State Building and oversees a wide range of tenants at 10 Union Square East, a condominium unit that encompasses an entire block between 14th and 15th Sts. east of Union Square. Tenants include the soon expiring Food Emporium branch, the commercial part of Zeckendorf Towers, along with brand names like Starbucks, Chipotle and UPS. All attest to the desirability of the trendy Downtown community.

Originally the deal with Target allowed F.E. to remain on the premises until April 2023, but then the transition date was pushed forward. There was no explanation from brokers, who did not respond to requests for phone interviews from this reporter who (full disclosure) has been an occasional patron at the F.E. branch since the aughts.

Shoppers at F.E. in its waning days wander through a starkly desolate space of roughly 33,000 square feet with row upon row of barren shelves and empty cases that once held varied frozen entrees and desserts. The sushi chef has left. The last custom-made cake from F.E.’s popular bakery was sold last week. There are no hot meals ready to go during these last days of a local mainstay, which was especially popular for seniors over 55, who got daily 10 percent discounts.

Weekend manager Raziaq Khalaliq, an immigrant from Kashmir, has been operating with a skeleton staff but expects the F.E. branch will completely be cleared out by its closing day. He estimated that only “10 or 12” employees remain out of a total of 60, with most of them now presumably working for other employers.

However, Khalaliq, 55, said he doesn’t have new employment prospects lined up for himself yet, noting earlier that Target had not retained any of the branch’s staff. He said that neither Target nor Key Food were “taking any responsibility” for employees still at the store.

Workers at the F.E. branch apparently have had no union representation from Union Local 338 of UFCW/RWDSU (United Food and Commercial Workers/Retail, Wholesale, Department Store Union) since 2015, when former owner A&P sold several New York Food Emporium stores to Key Food in bankruptcy proceedings. A Key food employee at its headquarters in Staten Island said the supermarkets operate as individual franchises, “like Dunkin’ Donuts.” She said there was an individual owner for the now-closed Food Emporium branch at Union Square to be taken over by a Target store but refused to disclose the owner’s name.

(Some Key Food franchises have been described as hostile to unions. One in north Riverdale, was accused last year of union busting for laying off 20 union members when it closed and did not rehire them when the Key Food store reopened.)

Over last weekend, a 66-year-old longtime F.E. cashier who identified herself as Maria Oropilla, an immigrant from the Philippines, now living in Elmhurst, Queens, said she is hoping to find employment quickly when the Union Square supermarket closes.

“I want a job. I’m strong,” she said with a smile, flexing her right bicep.

Maria, who this reporter has noticed many times at the checkout, said she has been working at Food Emporium stores for some 16 years, including one on Madison Ave., taking the subway to and from her full-time jobs. She’s single and said she lives in a one-room unit in a residential building, paying $400 a month. She doesn’t want to apply for unemployment benefits “just for myself” and would rather wait at least a year before filing for Social Security benefits.

Asked how she keeps her calm during an uncertain time, she pointed a finger upward: “I pray to God,” she said.

Maria wasn’t working on Wednesday and another much younger cashier, who said she was being paid “minimum wage” at the F.E. branch, drew a blank when I mentioned Maria’s name. This cashier claimed she had found a new job to go to. But a third cashier, age 20, said in late April that she was moving into her parents’ house “until I find another job and can afford another apartment.”

Several employees seemed fearful when asked questions about their impending work loss at F.E. and quickly walked away. Gabriel Morales, interim executive director of Brandworkers, a nonprofit group in Long Island City that organizes members over issues like fair wages, benefits and severance agreements for workers, described the labor scenario playing out in Union Square as “terrible” and an example of “corporate greed causing long-term damage to workers’ lives.”

Morales suggested that workers might consider reaching out again to Local 338 and to Target Workers Unite for support and connections “that might be helpful.” He said OUR (Organization United for Respect) has done most of its work with Walmart campaigns but has also opposed other big-box “retail layoffs.”

In addition, Morales said laid-off F.E. workers might also think about reaching out to their city councilmembers.

“I’ve also seen workers at Whole Foods and Trader Joe’s utilize petitions organized through coworker.org and the DSA-affiliated worker organizing group EWOC (Emergency Worker Organizing Committee),” he said. “Language in the WARN Act might also be helpful.” he added. In addition, Morales said, F.E. workers could contact him via his e-mail address at gmorales@brandworkers.org.

Meanwhile, no one interviewed by this reporter had seen anyone from Target checking out the space for its 30th store in New York’s five boroughs. However, one shopper, an elderly African American man pushing a cart filled with discounted products, said he heard that Target would be adding its own version of a “supermarket” in the space. Target declined to respond to questions about its plans.

Indeed, Jill Lewis, a spokesperson for the Minneapolis-based general merchandise giant, said she had no “updates” to provide and referred The Village Sun back to her first statement made on April 30, about the Union Square store, to wit: “I can confirm Target has plans to open a store in Union Square. We’re excited to bring an easy, safe and convenient shopping experience to new guests with this new Target store. Located at 10 Union Square East, the store will be approximately 33,000 square feet. As we get closer to opening the store, we’ll have more specific details to share — including how the shopping experience will be tailored to serve local guests and the grand opening date.”

It’s unclear who will be in charge of The Food Emporium branch when it closes on Sunday and becomes officially a Target in waiting. Brock Talbot, media relations manager for the Empire Real Estate Trust, Inc., owner of the building, said the company does not “speak on behalf of tenants and their plans.”