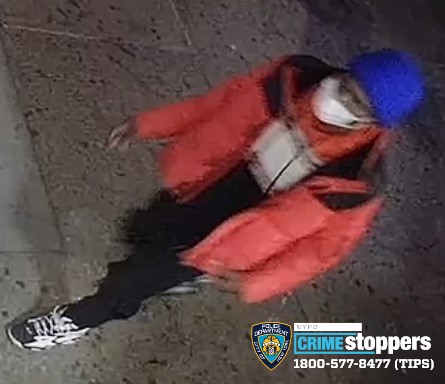 A photo of the suspect wanted for sexually assaulting a woman on E. Fifth St. (Courtesy N.Y.P.D.)

A 29-year-old woman was walking alone in the East Village early last Thursday, when she was approached by a stranger who pushed her up against a parked car and started groping her all over, police said.

It was 3 a.m. and the victim was walking on E. Fifth St. near Avenue B.

A person walking nearby noticed the attack, which caused the man to release the victim, and he fled on foot toward Avenue B.

Police provided an image and surveillance video of the alleged suspect, who is described as 20 to 30 years old.

Anyone with information should call the New York Police Department’s Crime Stoppers Hotline at 1-800-577-TIPS (8477) or for Spanish, 1-888-57-PISTA (74782). The public can also submit their tips by logging onto the Crime Stoppers website at WWW.NYPDCRIMESTOPPERS.COM, or on Twitter @NYPDTips.