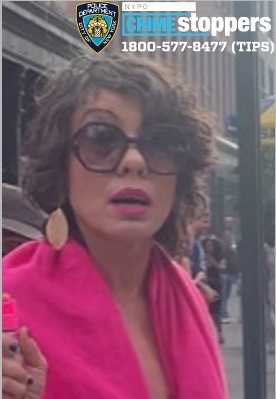 Police say they want to talk to this woman in connection with the incident. (Courtesy N.Y.P.D.)

BY THE VILLAGE SUN | Police are seeking the public’s help in identifying a Jackie O-sunglasses-wearing woman wanted for pepper-spraying four women and making anti-Asian statements at them.

Cops said the attack occurred during a verbal dispute on Sat., June 11, around 6 p.m., at the intersection of 14th Street and Ninth Avenue in the Meatpacking District. A police spokesperson did not have additional information on what triggered the incident.

The victims refused medical attention at the scene.

A video, above, released by police shows the suspect squirt a substance at the alleged victims. A lip reader would say the woman also appeared to be repeatedly saying, “Move!” before and after shooting the spray. (Courtesy N.Y.P.D.)

The suspect is described as a woman roughly in her 50s, 5 feet 3 inches tall and 120 pounds, and last seen wearing a multicolored orange dress, a pink scarf around her shoulders, sunglasses and gold earrings.