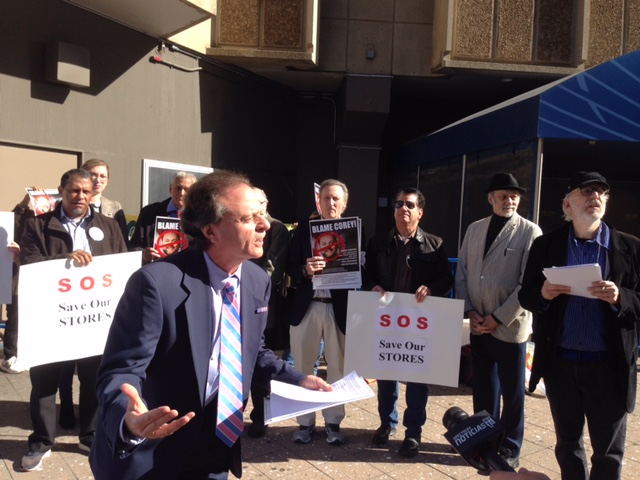 Trying to get the point across, Steve Barrison, of the Small Business Congress, speaking at an Oct. 24 rally for the S.B.J.S.A., above. (Photo by Sharon Woolums)

BY STEVE BARRISON | Brooklyn Councilmember Stephen Levin recently introduced his new “commercial rent regulation” bill, which would establish a Commercial Rent Guidelines Board appointed by Mayor de Blasio. This board would follow a set of guidelines, laid out by a statute, to establish annual commercial rent increase percentages for only specific types of businesses of limited square footage.

Levin’s bill, introduced on Nov. 14, is being touted as a solution to the sky-high rent increases destroying our small businesses and leaving empty storefronts citywide. It’s also being pitched as a substitute for the Small Business Jobs Survival Act, which has been held up in the Council Speaker’s Office for more than one year awaiting modifications before being moved to a hearing and vote.

In order to gain a full insight from a comparison of the bills, it is important to understand who the bills were written for and the intent of each one.

For the S.B.J.S.A., the answer to those questions is simple. Today, when a commercial lease expires, most bargaining in good faith for the new lease terms stops. Having no rights in the process, every small merchant is in jeopardy of closing when his or her lease expires or of having the business’s profits greatly reduced due to the landlord’s demands. Therefore, the primary goal of any law must be to give tenants the right to renewal for long-term leases.

The second goal is “leveling the playing field” in negotiations by giving tenants equal rights with landlords to negotiate fair lease terms. In turn, if mutual agreement cannot be reached, then an arbitration process would follow proven guidelines, fair to both parties, with each business treated on a case-by-case basis.

The S.B.J.S.A. was written by actual business owners who knew that the importance of a business’s future — in fact, their very survival — depended on obtaining fair lease terms. Several goals rarely discussed but important to small business owners included keeping government completely out of the commercial lease-renewal process, because small business owners do not trust government due to City Hall being controlled by special interests. Another goal was to make the process as easy and inexpensive to the business owners as possible.

Also, any law proposed must protect against and stop all landlord abuses, such as extortion of cash demanded to remain in business. Any law must offer long-term leases (of at least 10 years), which are the cornerstone for growth and job creation. Above all, any law must be fair to both parties, or it will fail.

The intent of Levin’s “commercial regulation” bill is also simple: It addresses only the rent and no other terms or rights of the commercial lease-renewal process.

The bill does contain some language regarding harassment of tenants. However, without the tenant having a right to renew their leases, no tenant in the real world would ever report their landlords.

Proponents claim the law will save small businesses by preventing rent gouging or big increases in the rent common in today’s highly speculative commercial rental market.

Understanding the intent of the bills and reviewing the details of each, a comparison makes clear why S.B.J.S.A. advocates call Levin’s legislation the “Landlords’ Bill.” Again, that’s because it gives no rights to small business owners when their leases expire. It was written by landlords for landlords to keep the status quo favoring only landlords.

In the Landlords’ Bill, all of the terms of the renewed lease — except the rent — are still determined only by the landlord.

The structure of the Rent Guidelines Board shows that even the rent, in reality, would be determined by the real estate industry, which holds the majority of seats on the board and which wrote the guidelines, which favor only the landlords’ financial needs. Therefore, the major cause of long-established small businesses closing when their leases expire will remain, in a failed, unfair, one-sided commercial lease-renewal process totally controlled by the landlords.

The city’s leading authority and advocate for small businesses for more than three decades is Sung Soo Kim, the godfather of immigrant businesses.

“Small business owners know they are in a crisis and it’s getting worse,” Kim said. “They fear the virtual end of the American Dream unless government intervenes on their behalf. In my 30 years of advocating for small businesses and dealing daily with their problems, I can state with confidence this reality: The absolute essential component of any law to stop the closing of businesses is giving the tenant the “right to renewal of the lease,” without which all proposals or laws will fail and all independent owners in New York City will eventually be forced to close.”