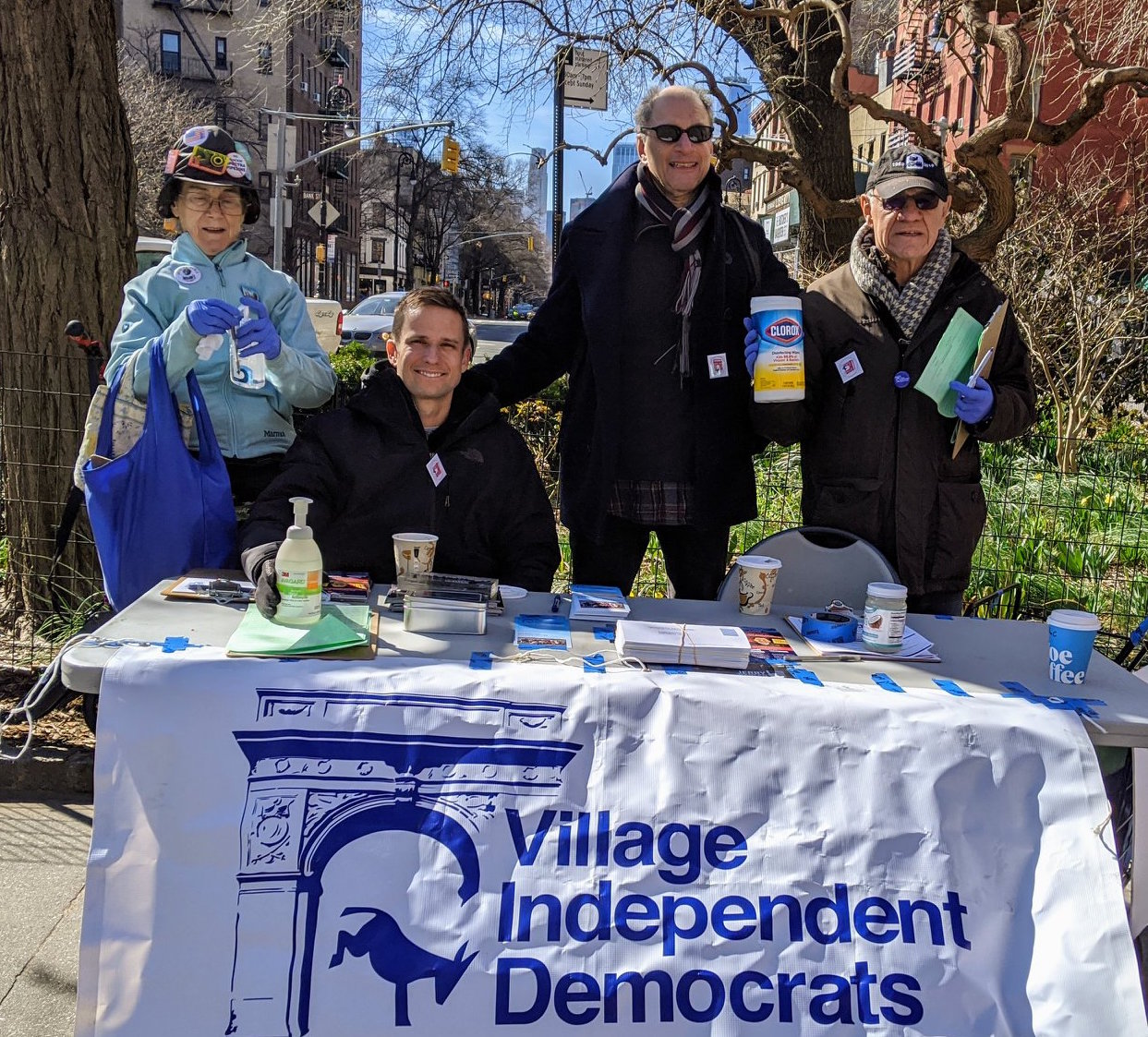 “We had gloves, hand sanitizer and Clorox wipes to make sure pens, clipboards and even the petitions themselves were disinfected,” said David Siffert, the club’s president. “Hopefully, we were able to minimize the danger involved as much as possible.”

Actually, also on Saturday, doing what everyone in political circles had hoped for, Governor Cuomo lowered the number of signatures required to get candidates on the ballot. His executive order temporarily modified electoral procedures, cutting the needed number of local voters’ John Hancocks to 30 percent of the normal amount.

Also as part of the governor’s executive order, petitioning will be suspended at 5 p.m. on Tues., March 17, for the June primaries for congressional, state Senate, Assembly and judicial races.

V.I.D. initially had planned to be out petitioning the next two Saturdays, as well.

“Public health experts have been clear that one of the most common ways to communicate COVID-19 is through direct person-to-person contact, and we are doing everything in our immediate power to reduce unnecessary interactions,” Cuomo said. “This executive order modifies the election process in a way that both protects public health and ensures the democratic process remains healthy and strong regardless of the ongoing pandemic.”

“We are very glad the rules are changing,” Siffert said. “We were part of the coalition pushing for this change. Had the rules not changed, there was a real risk that any candidate who stopped petitioning [out of a concern] for public safety would be left off the ballot, and only those willing to take the risk would qualify. The last thing we need is for public health to cause a breakdown in the democratic process, or for the democratic process to create a major threat to public health.”

Sixteen V.I.D. members were out petitioning Saturday, collecting a total of 250 signatures by registered Democrats at various locations around the Village, including Abingdon Square, Brooklyn Fare and D’Agostino supermarkets and the West Side supermarket on Third Ave.

“In just a little over two weeks of petitioning, we have collected at least 750 signatures, maybe more since many V.I.D.’ers haven’t returned their petitions yet,” said Tony Hoffmann, a former club president. “That’s enough to more than qualify our endorsed candidates [to get on the ballot].”

Asked if they realized that what they were doing might have been a bit risky amid the pandemic, Siffert said it was a difficult decision.

“At the point where the democratic process and public health collide, you have a real crisis. Neither can be sacrificed safely. We wanted to make sure excellent candidates qualified for the ballot under the safest possible conditions. We are very glad that the rules have been changed so that candidates and clubs don’t have to make these difficult decisions anymore.”

V.I.D. printed up two different petitions for candidates since its coverage area includes parts of two congressional districts. One petition was topped by Congressmember Jerrold Nadler and the other by Congressmember Carolyn Maloney. The rest of the candidates on both petitions were the same, including state Senator Brad Hoylman and Assemblymember Deborah Glick, along with five candidates for civil court, State Committee members Rachel Lavine and Ben Yee and judicial delegates.

However, in a follow-up e-mail, Siffert noted the club only circulated the Nadler petition on Saturday.

“We did not petition for Maloney yesterday, on her campaign’s request,” he said. “She and two of her three opponents made the decision jointly for safety reasons. I assume they also had enough petitions already, and they jointly agreed not to challenge each others’ [petition signatures], which lowered the effective threshold.”

Meanwhile, Ben Yee sent out an e-mail with health tips on dealing with coronavirus, including advise to petitioners to self-quarantine.

“[I]f you are politically involved, the Governor has ENDED petitioning,” Yee wrote. “If you have been petitioning, I highly recommend self-quarantine and checking for fever regularly. Sharing pens and stopping people in high-traffic areas is a great way to catch something.”

The State Committee member sent out his e-mail with a banner saying, “Ben Yee Public Advocate.” He was a candidate for public advocate in last year’s February special election, winning 2.5 percent of the vote.