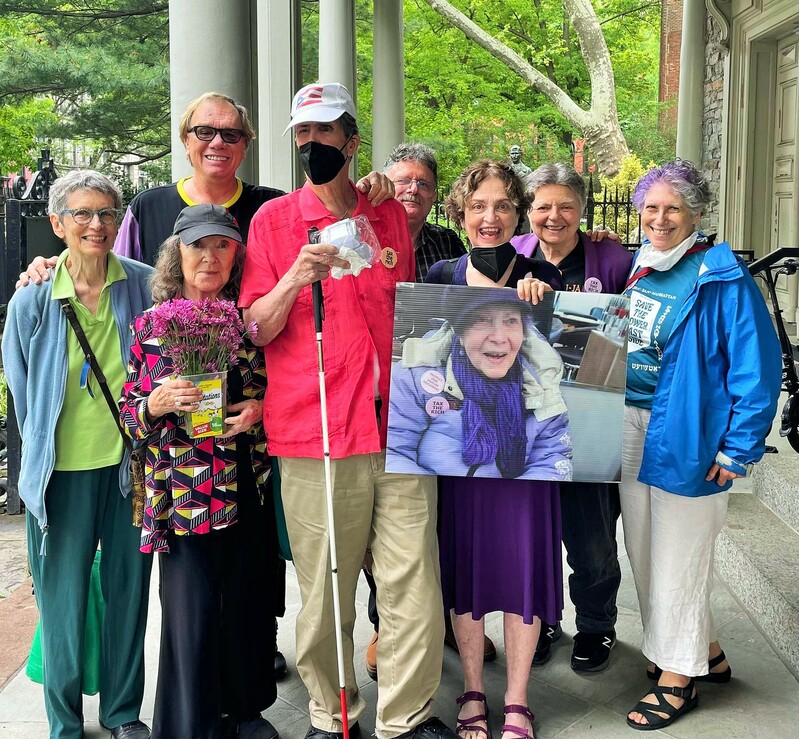 BY LINCOLN ANDERSON | Meet you by the purple bench.

Friends and comrades of Frances Goldin, the legendary Lower East Side housing activist-turned-literary agent, gathered at Abe Lebewohl Park on Monday to commemorate her Yahrzeit on the anniversary of her passing.

Some sat on chairs while others sat on a distinctive bench in the small, triangular park, at E. 10th Street and Second Avenue — the one with an eye-catching purple board at the top. In a guerilla act that would have made Goldin proud, last fall some of her friends, in her honor, painted the plank purple, the iconic activist’s favorite color.

They also added a small golden plaque at the center of the board, which reads simply:

The park is right outside of St. Mark’s Church, where Goldin’s memorial service was held last May, one year after her death, when it seemed safe enough again to hold in-person gatherings.

Yahrzeit, Yiddish for “year time,” is the observance in Judaism of the anniversary of the death of a parent, relative or close friend.

Roberta Schine, Goldin’s yoga instructor, brought deviled eggs — Goldin’s recipe, her favorite to bring to potlucks — to Monday’s Yahrzeit, along with handout lyric sheets for “The Internationale,” the socialist anthem.

There was thunder and light rain but it didn’t stop the gathering — fittingly, since Goldin definitely was never one to be easily dissuaded.

In the 1950s and ’60s, Goldin and her allies famously fought off Robert Moses’ Cooper Square redevelopment plan, which would have leveled 12 blocks — containing hundreds of residential buildings — from E. Ninth St. to Delancey St. to create a Stuyvesant Town-style middle-income complex, while displacing 2,400 tenants. Instead, Goldin and others fought to implement an alternate community plan, which, after five decades of struggle, was finally achieved.

Goldin continued her housing work as a co-founder of the Cooper Square Committee — fighting to racially integrate the Grand Street Co-ops, among other campaigns — before going on to lauch a career as a literary agent.

Under her leadership, the Frances Goldin Literary Agency published the likes of social-justice novelist Barbara Kingsolver, feminist poet Adrienne Rich and also Mumia Abu-Jamal, who was convicted in the 1981 killing of a Philadelphia police officer and, after being taken off death row, is now serving a life sentence without parole.

Later in her career, she co-edited a book that was especially close to her heart, “Imagine: Living in a Socialist USA,” published in 2014.

Goldin’s ashes are held in a purple urn in the shape of an upthrust fist.

Goldin’s daughters, Sally and Reeni, could not make it for Monday’s event. Sally, who lives in San Francisco, is still not flying due to COVID and Reeni is currently in Ireland.

But, in a group e-mail beforehand, Sally sent her well wishes to Goldin’s friends, encouraging them to gather by the purple bench and to “tell Fran stories, maybe bring a sandwich for lunch. Fran always had food at her gatherings.”

In closing, she saluted them, “Raise your fist in the air for me and Reeni!”