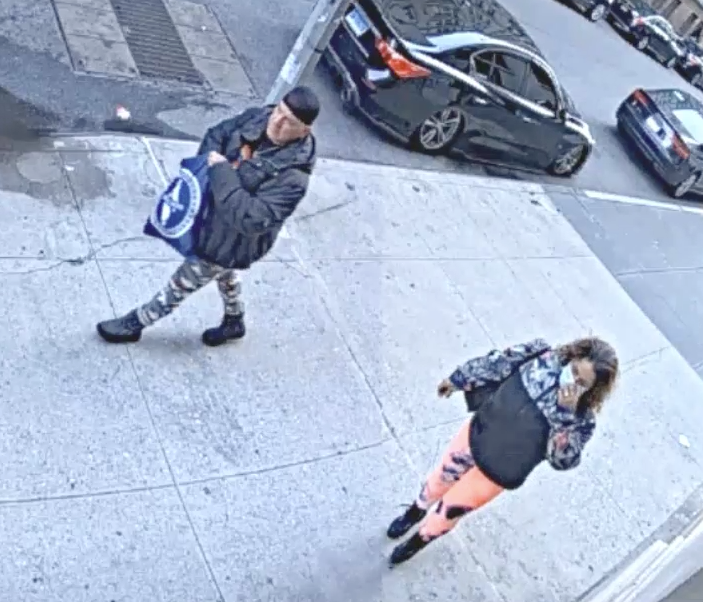 Police say they are looking for this pair — here seen walking on W. 19th St. — in connection with the Oct. 18 subway shooting. (Courtesy N.Y.P.D.)

This gunman must have been pretty pissed off.

An unidentified man, accompanied by a woman, reportedly began a verbal dispute with the peeing person. Things apparently escalated and the man fired multiple gunshots, striking the urinator once in the neck and once in the back.

The shooter and his female sidekick fled on a northbound train, exiting quickly at 18th St. and Seventh Ave.

The victim walked to the Lenox Health Greenwich Village emergency department after the incident in stable condition.

The male suspect is described as having a medium build and was last seen wearing a black bubble jacket, camouflage pants, black boots and a black du-rag and holding a blue string backpack.

The woman had a thin build and shoulder-length curly hair and was last seen wearing a multicolored jacket, pink leggings, black boots and a surgical mask on her chin and carrying a black pocketbook.

Police released surveillance photos and video of the suspects that were obtained after the incident.

On Oct. 26, police released additional photos of the alleged suspects, below:

Police ask that anyone with information call the New York Police Department’s Crime Stoppers Hotline at 1-800-577-TIPS (8477) or for Spanish, 1-888-57-PISTA (74782). Tips can also be submitted on the Crime Stoppers Web site at WWW.NYPDCRIMESTOPPERS.COM or on Twitter at @NYPDTips.