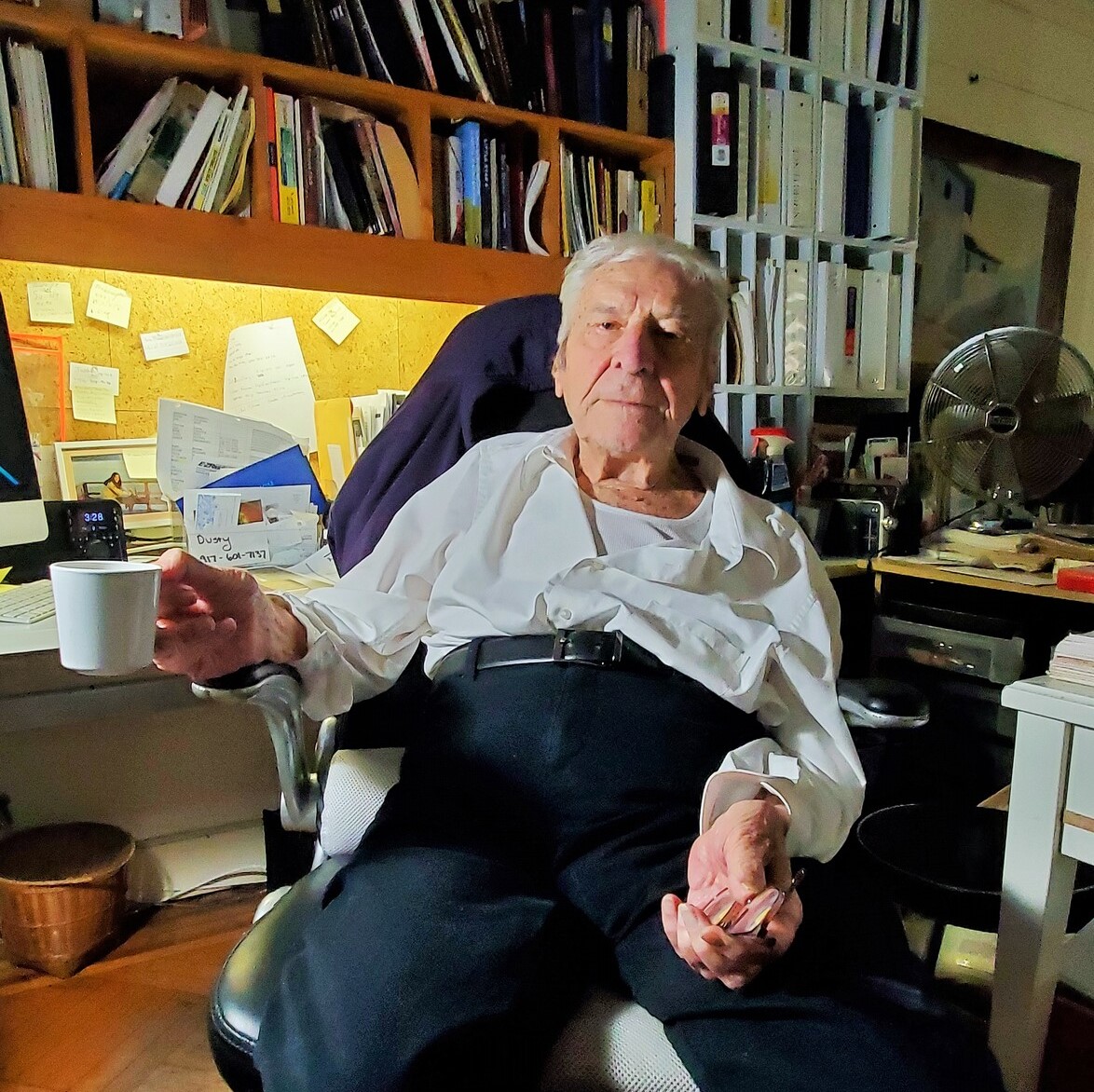 WestView News publisher George Capis said he heard and partly saw the clash in his office — but that the fan on his desk, at right, that he is always asking Dusty Berke to move partially blocked his view of some of the action. (Photo by The Village Sun)

BY LINCOLN ANDERSON | Call it “As the WestView News Turns.”

Greenwich Village’s community media soap opera continued to play out this week as the centenarian mother of Arthur Schwartz, the publisher of the breakaway New WestView News, called George Capsis, the 95-year-old publisher of WestView News, to badger him about not receiving her monthly newspaper in the mail yet.

Following its paid staff’s departure from WestView to join Schwartz in starting up New WestView, the former paper has still not managed to publish a December monthly print edition. Meanwhile, New WestView News put out its inaugural print edition on Dec. 2.

Capsis was indignant over the call from Schwartz’s mom, charging that Schwartz, who is also Greenwich Village’s Democratic district leader, surely must have put her up to it.

“She wants her paper,” Capsis scoffed to The Village Sun, recalling the conversation. “‘Are you still in business?’ … Isn’t that outrageous? His 100-year-old mother has to call — to find out if I’ve gone out of business. He got his mother to call me! That was Arthur saying, ‘You haven’t gotten the paper out.'”

Capsis said Schwartz is probably “calling everyone” and urging them to phone Capsis and say they want their money refunded for their WestView subscriptions.

Schwartz chuckled at the latest flap, saying, “She said she just sent George a check for $24 and she didn’t get a paper this month. She called him up to say, ‘If you don’t send out the paper, you should transfer the subscription to the new paper.'”

Schwartz said Capsis retorted by exploding at his mom, “Your son stole my paper!”

His mother used to live in the Village but now resides in an assisted-living facility on the Upper West Side. Like others who have moved away, though, she still likes to keep in touch with her old neighborhood through local media.

“I didn’t tell her to do it,” Schwartz insisted, lightheartedly, of the phone call. “My mother is a very strong-willed lady. She counts every penny. If she buys something, she wants to get it.”

Schwartz said his new paper is a 501c3 nonprofit.

“No one’s making money here,” he said, though noting the production staff is getting paid.

For his part, Capsis says WestView News does not turn a profit every month and that he just tries to cover the printing cost and not operate at a loss — which is not atypical for community newspapers.

Meanwhile, The Village Sun has learned a bit more about the clash that drew police to 69 Charles St., Capsis’s building, in the early afternoon of Tues., Dec. 20. The two individuals involved were Dusty Berke, Capsis’s “right hand” and the new managing editor of WestView, and Alan Silverstein, a community liaison to Greenwich Village’s Sixth Precinct. It happened to be Capsis’s 95th birthday.

What is clear is that Silverstein dropped by to meet with Capsis in his ground-floor office, but that Berke refused to leave the room so the two men could talk together alone. What happened next is a “Rashomon,” with three different versions.

Silverstein told The Village Sun his take on the incident but declined to comment for this article.

Capsis, who was not involved in the altercation, told the newspaper what he saw and heard. Capsis is not very mobile, so was rooted to his office chair as the confrontation went down. He mistakenly referred to Silverstein as “Weinstein.”

“What happened was, I was sitting at my desk,” he said. “There’s a fan that was blocking my view. I beg Dusty every day to take the fan and put it in the basement. But there’s no room to put anything away because of Dusty’s clothes in the basement. She has hundreds of dresses.

“I was slouched in my chair,” he recalled. “Dusty hates Weinstein. They had a fight. Dusty started to make grumbling noises. I said, ‘Can you give us 15 minutes?’ As soon as the 15 minutes was up, she opened the door [and came back in]. I hadn’t even started to talk to find out why he was there. He said something to Dusty: ‘Leave, we’re not finished.’ Dusty just started to talk.

“He tried to push her toward the door and she didn’t move,” Capsis said. “Alan was pushing to get her out and Dusty was not moving. So they tussled and Dusty fell down. She hurt her rib, nothing serious. There was a lot of squawking.

“And then the police started to arrive — but the police were very nice. But he had called his police and she had called her police. It was totally useless. There were two police inside, two police outside. And I still don’t know what Weinstein had in mind — because we didn’t finish the conversation. And then Weinstein went home, that was the end of it.”

Berke confirmed, “I was there, I didn’t move.” However, she claimed Silverstein picked her up and “body-slammed” her.

Berke said she hurt her rib and knee. But she apparently did not seek medical treatment. She said she tried to file an assault complaint against Silverstein but that police would only let her file one for harassment.

“Alan was poking around here,” she said.

Deputy Inspector Stephen Spataro, commanding officer of the Sixth Precinct, previously told The Village Sun, “We have a report for harassment there [but not assault] as there were no injuries reported.”

Schwartz, even though he is now leading the rival New WestView News, claims he has a still-viable agreement and 1 percent ownership stake that would allow him to take control of WestView News if Capsis becomes incapacitated.

Meanwhile, Berke said she is the one in line to take ownership of the paper.

“If George dies, he and his family agreed, ‘You get the paper,'” she said, though conceding, there’s “nothing in writing.”

Berke charged that Schwartz’s agreement to take over the paper — which involved him buying a certain number of full-page ads in WestView — is not valid.

“He didn’t meet the threshhold, at all,” she declared.

Berke, who has lived at 69 Charles St. for the past six years, also stresed that she is not a trained caretaker for Capsis. Someone recently questioned if Capsis is getting all of his medication.

“I’m not his caretaker,” she said. “George is his caretaker. His pills are right by his bed. I’m his right hand. … I can’t explain why I do it, but I’m doing it, that’s all I can say.

“I’m not the problem,” she said. “Arthur’s been trying to steal his paper for a long time. Alan tried to get the paper before. There are people who want things and I am the only thing standing in their way.”

Capsis did not want to comment on the record on whether he will sue over the New WestView News. However, Berke said of Capsis, “George has a bada– lawyer. He has a very honest, great, great, great lawyer with a really great firm. I’m not saying who it is.”

As for whether WestView News will publish a December issue — or any issue — Capsis said, yes.

“Oh, we’re close,” he said. “Yes, it’s very close to getting out. We’re going to get it out one way or the other. Especially because Arthur’s mother called.”

He admitted, “This is the latest we’ve been in 21 years.”

Berke claimed WestView, in fact, had been ready to publish an issue on Dec. 3, but decided to retool the whole issue after the surprise Dec. 2 publication of New WestView News’s inaugural issue.

“He has to have a very targeted attack,” she said of Capsis’s response to the upstart paper.

Meanwhile, Capsis said Berke is trying her best to put together the newspaper in old-school, pre-desktop publishing style. Articles are currently cut up in strips of paper and strewn all over the place on the kitchen table, he said.

“I can do everything but the computer,” Berke said.

As for whether there could be any reconciliation with the breakaway paper, Berke said she wasn’t sure if she personally would be willing to welcome back to WestView News any of the contributing writers who have defected. As for Capsis’s desire to bring in a professional editor to help publish the paper — which he has expressed to The Village Sun — Berke, for her part, said she would first have to see if she could work together with that person or not.

The main reason for the defection of the WestView staff and many of its contributors is said to have been Berke’s rising influence at the paper, along with her trafficking in conspiracy theories and conservative viewpoints.

Capsis admitted that Berke and Kim Plosia, WestView’s former managing editor, who is now at New WestView News, never got along.

Berke admits that the staff disliked her from the start, claiming they were envious of her sales ability and good looks.

In wrapping up a phone conversation with The Village Sun, Berke referred to Event 201, a simulated, tabletop exercise that some claim uncannily — and suspiciously — “predicted” the COVID outbreak. She said she would send the newspaper some information about it.