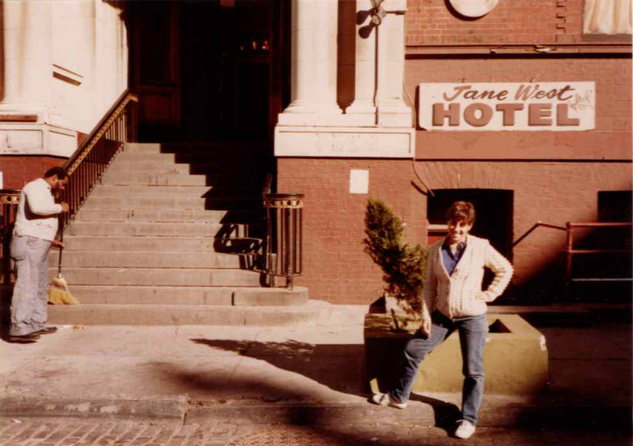 When the Village had many mayors

Michele Herman in front of the Jane West Hotel, above, in 1985. (Photo by Jonathan Kuhn)

BY MICHELE HERMAN | Willy, Lucille, Billy, Eddie and Jimmy. Late in the last century they were our most local of local officials: our unelected mayors, each presiding in his or her distinct style over a single block of the far West Village.

This was before the SUVs and nannies and European tourists arrived, in the years when we still had what city planners call “soft” or “unimproved” sites — the occasional abandoned building and empty lot.

During these years, we residents all chipped in 20 bucks a month for an Epic Security guard to drive around patrolling at night to keep the transvestite prostitutes and the crack users and the car thieves and the miscellaneous nogoodniks relatively in check.

We knew the mayors well and didn’t really know them at all, just as they knew us: from a daily exchange of pleasantries and a shared feeling of belonging to the neighborhood. Some lived here, others worked here and disappeared at the end of their shift to who-knows-where. Some were sweet, others had an edge. Some worked hard, some just sat. But they were all eyes on the street, which, if you’ve read your Jane Jacobs, you know is one of the main ingredients separating a healthy neighborhood from a sick one.

I’ll start with the most unlikely of the bunch: Willy of Jane St. between Greenwich and Washington Sts. Willy was a slight, gentle African-American with a deep Southern accent. Speaking of eyes on the street: His always startled me because they were a beautiful pale blue. I usually saw Willy near the corner of Washington in the morning when I was heading to work on my bike. Willy was the only mayor I never saw sitting. He was always relaxed and ready to chat, and I wish I could remember what we talked about. I knew he was a caretaker, but of what buildings I was never sure.

Lucille Chasin was the fearsome old Villager who ruled Horatio St. between Greenwich and Washington, a Communist with long, stringy black hair, a surprisingly beautiful face, and a massive tent dress that couldn’t hide the tragedy of her legs: heavy and so deeply bowed that she had to sway wildly from side to side to get any forward movement at all.

She was smart and friendly, but I learned over time that her mood could suddenly turn angry and paranoid. We met her right after we moved to the neighborhood, on a walking tour with a guide named Michael Levin, who set in motion our lifelong interest in our neighborhood’s history. Lucille took over the tour for a little while, and even opened up her front door and waddled through the narrow passage to the completely unexpected courtyard in the rear. It was Lucille who talked up the cooperative nursery school across the street. We weren’t even married yet, but we dreamed that one day we might have kids who would attend. Not only is that exactly what happened, West Village Nursery School exceeded our dreams because we made many lifelong friends there.

You expect the mayor of a block to fade gradually from office as age and infirmity sap their strength and memory. But Lucille went fast, and violently: Her throat was slit by a would-be robber in the early ’90s. Maybe she wasn’t paranoid after all.

Billy lived a few blocks south and presided over Bank St., also between Greenwich and Washington, from a lawn chair in front of the stucco building with the nautical plaques. He was part of the older generation of gay men who found relative freedom in the West Village. He was a sweetheart with a deep, resonant voice, a relaxed retiree who liked to hold court on warm evenings.

We got to know Billy when we had a toddler in a stroller. When he learned that our son loved horses, he promised him a little horse. No horse materialized over the next couple of visits, and we were disappointed. But eventually Billy did produce a ceramic horse, one that was loved well enough that I periodically had to glue its parts back together.

Alas, Billy didn’t serve long on Bank St., because a subsidized apartment for retired artists opened up in Midtown. We learned that (if memory serves correctly) he had been a classical DJ known as “Billy Joyce with the golden voice.”

Our own first block, the westernmost stretch of Jane St., didn’t have much going for it. Our converted cold-storage warehouse on the south side of the street was sandwiched between a smokehouse that made the street smell like barbecue sauce and an abandoned building filled with squatters that later burned and was torn down. On the north side, the Jane West Hotel was still a classic S.R.O. where partiers stood on a noisy line late at night to dance to pounding house music in a short-lived basement disco, the space that later became the first home to “Hedwig and the Angry Inch.”

The rest of the block was taken up by a rundown townhouse adorned with a graffiti message reading, “Bob Man Rasta Man” (which my husband and I still occasionally say aloud apropos of nothing), and the New York Builders Supply Company, a huge one-story garage directly across the street from our two windows.

Eighteen-wheelers would often arrive well before the company’s 7 a.m. start time and sit idling, filling our second-floor bedroom with diesel fumes. We took turns throwing on a bathrobe and going down to knock on the window and beg the driver to cut the engine.

It was a raggedy block, but we had our own mayor: Eddie, the foreman of the building supply. He was a heavyset, slow-moving older man in the requisite lawn chair, with the gift of gab. I liked talking to Eddie, who was solicitous and paternal and was always happy to help if I needed, say, some metal struts for a filing cabinet cut to the right size. Eddie got to know my routines as I knew his, and this was comforting until it became clear he knew my comings and goings way too well; I began to keep the shade drawn in our bedroom. Eventually the company was squeezed out and moved up the Far West Side to the 30s when rents were still cheap.

Finally I arrive at the best known and most beloved mayor: Jimmy of the southwest corner of 12th and Hudson Sts. He lived with way too many others at the old Village Nursing Home, now a super-luxury apartment house for a few families, complete with basement gym. When it was still a nursing home, its main amenity was a few benches on the sidewalk, filled with stationary flaneurs except in the worst weather.

Jimmy, who I believe was from Shanghai, spent his days in his wheelchair catching the sun and talking to passersby. He would grin at our kids and then grin up at us in delight. As the years went by, his body and hands grew more tight and torqued from disease, and talking became difficult and finally impossible. But he could still grin.

I often think that Jimmy, with his deeply tanned face turned to the sun, was the most content person I ever met. I think about the others, too, as I make my daily rounds. They are probably all dead now. Since they left, the neighborhood has grown richer. But the sidewalks, with not a lawn chair in sight, are poorer.